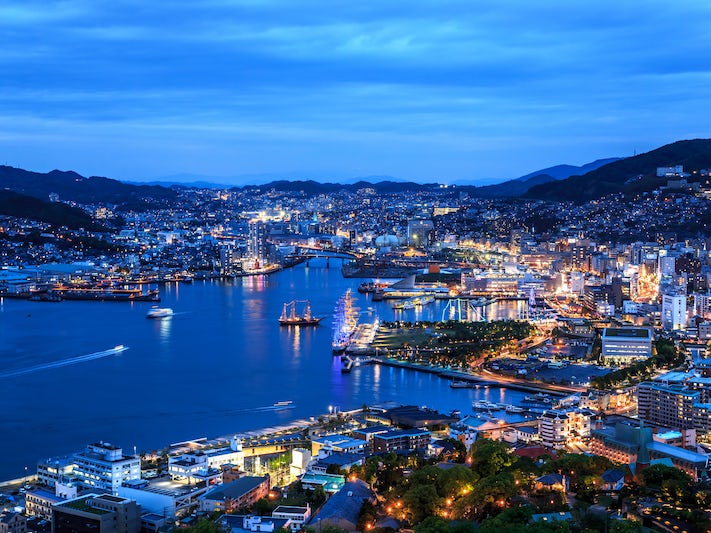 Find Things to Do in Nagasaki on Viator

Popular Things to Do in Nagasaki

Food and Drink in Nagasaki

Nagasaki, with its history of foreign influences, has a great variety of eating opportunities. One popular dining experience is the banquet-style shippoku-ryori, a meal in which a group of at least four samples Japanese, Chinese, and Portuguese dishes, perhaps accompanied by Japanese beer, sake (rice wine) and green tea. Other Nagasaki specialties include champon, a kind of soup with pork, octopus squid, vegetables and noodles, and sara-udon, the stir-fried equivalent using the same ingredients. Of course, there is sushi (cold rice and raw fish or vegetables with soy and other sauces) and tempura (deep-fried seafood and vegetables).

Hamanomachi shopping arcade and its side streets offer the most concentrated selection of lunchtime places. Picture menus will help you choose, or you can look around at what others are eating. We found a place on a side street near an Internet cafe where, for $7, I had a bowl of noodle soup with shrimp, octopus, rice and dumplings. The department store's lower level food court (the Japanese equivalent of Whole Foods) is also outstanding with its mouthwatering and colorful displays, but it has no tables for onsite eating. However, on a nice day, the takeaway items can be enjoyed in the nearby waterfront park.

Shikairo is a Chinese restaurant conveniently located between the cruise ship pier and Glover Garden. The dining room is on the fifth floor and offers great views over the harbor. Menus are in English with pictures, and prices for the main dishes run from about $8 to $12. While the Chinese-influenced building is new, the restaurant (established in 1899) claims to be the inventor of champon. The complete meal adds dumplings, rice, pickled vegetables and tea. (4-5 Matsugae-machi; open for lunch and dinner)

Shippoku Hamakatsu offers shippoku dining for small groups and individual diners. At lunch, the set price is 2,900 yen ($24). On the main floor, the tables are set Western-style in private alcoves with bamboo screens, while on the floor above, the Japanese-style tatami room has cushioned seating around low tables. A larger menu with more selections, including sushi, is also available for larger parties. (6-50 Kajiya-machi; open for lunch and dinner)

A visit to the Atomic Bomb Museum is the primary reason visitors come to Nagasaki. The museum's location, north of the city center and about two miles from the cruise ship dock, coincides with the hypocenter of the explosion. The bomb was supposed to land in the heart of the city, with its industry and shipyards, but poor visibility resulted in the bomb landing in the northern suburbs instead. Of a population estimated to be 240,000, 73,844 were killed, and just as many were injured by the blast, heat rays and radiation.

In the museum, photos show the city before its destruction, as well as footage of the bomb being dropped, photographed from the air. Using spreading lights, a model of the city shows the areas destroyed and damaged. Subsequent photos show burned victims, shadows of objects left by the heat rays (such as a lookout and a ladder against a wall), radiation effects and genetic effects on the next generation. Adding to the poignancy, story panels and videos tell survivors' stories and depict the relief and rescue efforts. In the adjacent Peace Park, you'll find a sculpture of a man with his right hand pointing to the sky from whence the bomb came and left hand outstretched, asking for help. Take tram 1 or 3 from the city center; the ride takes about 15 minutes. (7-8 Hirano-cho; open daily, 8:30 a.m. to 5:30 p.m.)

Another major attraction is Glover Garden, an assembled collection of mostly wooden western-style homes and other buildings, set in a hillside park, that date back to the 19th century, when Western merchants established settlements in Nagasaki to promote trade between the East and West. Glover Garden is located on a slope directly above the cruise dock and is easily reached by a series of escalators. The garden's name comes from Thomas Glover, a Scot, who -- during the Meiji Restoration in the late 19th and early 20th centuries -- established Japan's first railroad and the shipbuilding industry that later became Mitsubishi. Visitors can see the Mitsubishi No. 2 Dock landing, with exhibits detailing its development. Glover's house and those of other Western entrepreneurs in beer brewing and coal mining are also located there. The wooden, Gothic-style Oura Catholic Church, built in 1863 for the foreign community, is now listed as a national treasure. ( open daily, 8 a.m. to 9:30 p.m. in summer and peak season)

The Dejima Museum recalls the life and influence of the Dutch island colony that existed for some 200 years during Japan's isolation period. The site was chosen to prevent the spread of Christianity among the Japanese. Most exhibits are housed in a Protestant Seminary -- a restored, wooden, two-story building -- and they focus on the trade conducted during the isolation period and the influential cultural exchanges between the Japanese and Europeans. A restored stone warehouse shows some of the archeological finds on the original property. The museum may be accessed on foot from the pier in about 15 minutes or by Trams 1 and 5. (6-3 Dejima-cho; open daily, 9 a.m. to 5 p.m.)

A neighborhood of small temples is located just north of the city center. Sofuku-ji (7-5 Kajiya-machi) is located two blocks from the end of tram lines 1 and 4, at a station named after the temple. Enter the Zen sect temple, built in 1629, through a Ming-style gate to find a large 17th-century bell and an equally old cauldron, used to serve food during a late 17th-century famine. Very close by, on Sofukuji-dori, Daiko-ji -- which is reached by steep steps -- was spared from any damage during the atomic bomb drop. Hosshin-ji, down the hill and to the right, has a temple bell that was cast in 1438. The fourth temple, Daion-ji, contains the final resting place of the magistrate, who got caught up in a Napoleonic War dispute between the British and Dutch; he committed suicide when he was unable to successfully help the Dutch oppose the British.

The JR Nagasaki Station area, reached by trams 1 and 3, offers shopping, restaurants and tourist information. Amu Plaza, alongside the station, has a restaurant arcade with varied menus, some with harbor views, and the noted Dragon Deli for an international selection of foods. Local crafts are located in the same building -- across the street -- that houses the Nagasaki Prefectural Tourist Federation.

The 26 Martyrs Memorial, a five-minute walk from the port on Nishi-Zaka, recalls in wall reliefs the Christians who were crucified in 1597, plus the Japanese -- including two children -- and Spanish friars who were also killed.