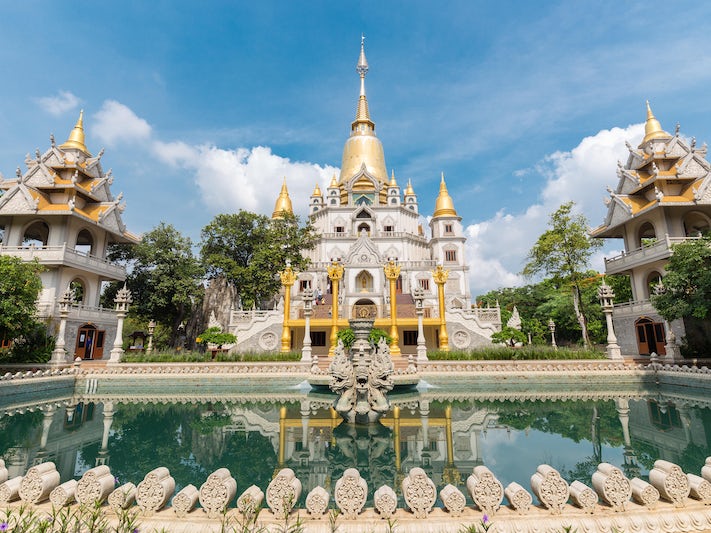 Find Things to Do in Ho Chi Minh City on Viator

Popular Things to Do in Ho Chi Minh City

Cosmopolitan Ho Chi Minh City offers a wide range of cuisines, including French, of course. As you are visiting Southeast Asia, you'll want to try the local cuisines -- Vietnamese and Chinese, particularly -- which are complex and offer a wide variety of ingredients, preparations and tastes. Some are hot, while others are quite mild. All the establishments listed below serve lunch and dinner.

Cuc Gach Quan: Located in a pretty villa, this popular restaurant serves authentic local cuisine, beer, and drinks served in fresh coconuts. The huge menu can be overwhelming but the wait staff will help you select from the many dishes, which include grilled fish served in a clay pot, fried soft-shell crabs and shrimp dressed in tamarind sauce. (10 Dang Tat, District 1; +84-8-3848-0144; open daily, 9 a.m. to 11:30 p.m.)

PHO 2000: This large, casual and affordable restaurant is located across the street from Ben Thanh Market. It is famous for pho noodle soup made with oxtail, beef, chicken or tripe. Other pho choices showcase fish and shellfish or are strictly vegetarian. This is a favorite stop for many of the shore excursions and private tour companies, as well as locals. (1-3 D Phan Chu Trinh; +84-8-822-2788; open daily, 7 a.m. to 10 p.m.)

Du Street: Just three blocks from the Rex, this road is lined with Chinese, Japanese, Indian and Vietnamese restaurants, most with menus and prices in the front windows. Cruise by them and look in to see which ones are the most popular.

Lemongrass: Named after the popular herb, this is one of the best-known Vietnamese restaurants in the city. The three-level building is furnished with cane seating and tile floors. The long menu lists fixed lunches that might include soup, spring rolls and a light curry for just a few dollars. Two favorites are deep-fried prawns in coconut batter and crab sauteed in a pepper sauce. If you go with others, choose several dishes and share. (4 Nguyen Thiep; +84-8-822-0496; open daily, 11 a.m. to 10 p.m.)

Quan An Ngon: Just one block from the Rex and Hotel de Ville and near the Museum of Ho Chi Minh City, Quan An Ngon has indoor and balcony dining. In addition, it has an outdoor garden patio where you can see cooks preparing traditional Vietnamese dishes using fish, chicken, beef and various other ingredients. Try the spring rolls, noodle dishes (including cold noodles with beef), rice and vegetable combos (featuring broccoli, cabbage, eggplant and spinach), and the spicy stews. This place may be busy and noisy during peak times but it's inexpensive and offers a great introduction to Vietnamese cuisine. (138 Nam Ky Khoi Nghia; +84-8-3825-7179; open daily, 7 a.m. to 11 p.m.)

Le Jardin: Located at the Institute of Cultural Exchange with France, District 1 (about four blocks from the Rex), Le Jardin is a popular French bistro set in a garden. Frequented by French visitors and sophisticated Vietnamese locals, this restaurant features French main dishes and some French-Vietnamese fusion. (31D Thai Van Lung; +84-8-3825-8465; open Monday to Saturday, 10 a.m. to 10 p.m.)

Rex Hotel: Head to the Rex Hotel, either by ship's shuttle or taxi, and you will be in the heart of Ho Chi Minh City. Most of the city's sights are walkable from there. The pre-war-built Rex was the center of social life during the Vietnam War; its fifth-floor rooftop bar and restaurant was the liveliest place in town for American troops on R&R and journalists looking for stories. Take the elevator to the fifth floor from the lobby (which is now ringed with top designer boutiques) to have a look, but do not expect to find much life or atmosphere until the evening, when locals and visitors alike gather for drinks. The menu offers everything from sandwiches and spring rolls to full meals, and the prices are much higher there than at most restaurants you will find at street level. (141 Nguyen Hue Boulevard, District 1)

Museum of Ho Chi Minh City: A five-minute walk from the Rex, this museum is housed in a classical, circa-1885 building. The collection centers on the Communist history of Vietnam, and includes French-language newspaper clips of Ho Chi Minh's writings, which he penned under a pseudonym. (65 Ly Tu Trong, District 1; open daily, 7:30 a.m. to 6 p.m.)

Independence Palace: Probably the best known site to those who lived through the Vietnam War, this museum and reception center is also known as Reunification Palace. Built in 1965, the building housed banquet, ceremonial and meeting rooms and, in the basement, a warren of offices from which the Vietnam War was conducted. Original equipment -- radios, phones, printing machines and maps -- is on display. Standing on the hall's front steps, look across the courtyard to the main gate that was dramatically breached on April 30, 1975, by a North Vietnamese tank, signaling the Communist victory. English-speaking guides are available. (106 Nguyen Du, District 1; open daily, 7:30 to 11 a.m. and 1 to 4 p.m.)

War Remnants Museum: This museum, once known as the Museum of Chinese and American War Crimes, is two blocks behind Independence Palace. It is sure to bring back bad memories for baby boomers, but for those who want to dig deeper into the horrors of war, the museum offers candid photographs and exhibits, albeit with a distinctly anti-American and anti-French slant. A guillotine, prisoner cages, wartime photos (some of which are not for the faint-hearted), tanks and armaments are also on display. Some of the labels are in English. (28 Vo Van Tan, District 3; open daily, 7:30 a.m. to 6 p.m.)

Ben Thanh Market: Topped by an imposing clock tower, this market occupies a pavilion encompassing one square kilometer. Located three blocks from the Rex, along Le Loi Street, the market dates back to 1914. Operating every day, all day, it is geared to visitors with row after row of stalls that display both familiar and exotic produce, fish and shellfish, as well as clothing, housewares and tourist items such as red and black lacquerware, paintings, prints, porcelain, jewelry, watches and wood carvings. Perhaps most intriguing are the food stalls, where locals and tourists alike can enjoy a quick snack or full meal. Shopping at Ben Thanh can be exhausting; narrow passageways are lined with hundreds of shops where hawkers try their best to grab your attention and make a sale. Bargaining is expected, but remember to be courteous. The Vietnamese consider rude, angry and emotional behavior to be crass and bad form. (Corner of Le Loi and Ham Nghi streets, District 1; open daily, 7 a.m. to 7 p.m.)

Chinatown: Cholon, an older section of the city in Districts 5 and 6 (the western part), is the city's Chinatown, with a maze of narrow streets, hundreds of commercial shops and several outstanding pagodas, all clustered in a small area. The ambitious can walk there from the Rex Hotel in about 30 minutes, but there are many streets to cross, so taking a taxi or pedicab is your best bet. (Note: Be sure to establish the price of the cab before you set off. Also, remember that it will be easy to find another cab for the return trip.)

The pagodas are worth some time once you arrive. Thien Hau Pagoda, built in the 18th century, is dedicated to the goddess of the sea and the protector of sailors (and presumably cruise-ship passengers). Elaborate ceramic friezes line the roof, and the pleasant smell of incense comes from burning coils that hang from the ceiling. A sacred horse greets visitors and worshipers at the entrance to Phuoc An Hoi Quan Pagoda, and many stroke his mane and ring the bell around his neck as a ritual ensuring long life. The interior and altar are particularly beautiful. Quan Am Pagoda, built in 1816, displays a ceramic ceiling that depicts traditional Chinese stories and plays.

The Vietnam History Museum: This museum traces Vietnamese culture from the Bronze Age to the Cham, Khmer and modern periods. The circa-1929 building houses displays of costumes, pottery and art, as well as a small water puppet theater. This ancient art form features men hidden behind a screen, manipulating puppets in the form of humans, dragons, birds, frogs and turtles on, under and above the water surface to relate legends, simulate fights and perform dances. The enchanting performances are accompanied by music, and the manipulators appear, chest-deep, in the pool to take their bows. Shows generally start when five or more people have gathered. (2 Nguyen Binh Khiem, District 1; open daily, 8 to 11:30 a.m. and 1:30 p.m. to 5 p.m.)

Cu Chi Tunnels: Hire a shared taxi for a 45-mile, one-hour trip out of Ho Chi Minh City to see this complex of underground passages and living quarters that Viet Cong guerillas designed in order to make clandestine attacks on American troops. While the tunnels were first constructed after World War II to fight the French, they were greatly expanded during the Vietnam War and eventually extended some 120 miles. In one small area, you may climb down into the enlarged and reinforced tunnels to experience what it was like to live underground. On the road out and back, the route passes rice paddies, rubber plantations and flower markets. (Durong tinh lo 15, Phu May Hung; open daily, 7 a.m. to 5 p.m.)

Vung Tao: Originally a French coastal resort and then an American and Australian rest-and-recreation center during the Vietnam War, Vung Tao lies about 35 miles from the dock at Phu My. Attractions include beaches (Bai Sau, or Back Beach, is best), seafront restaurants, the view from a lighthouse and several pagodas.