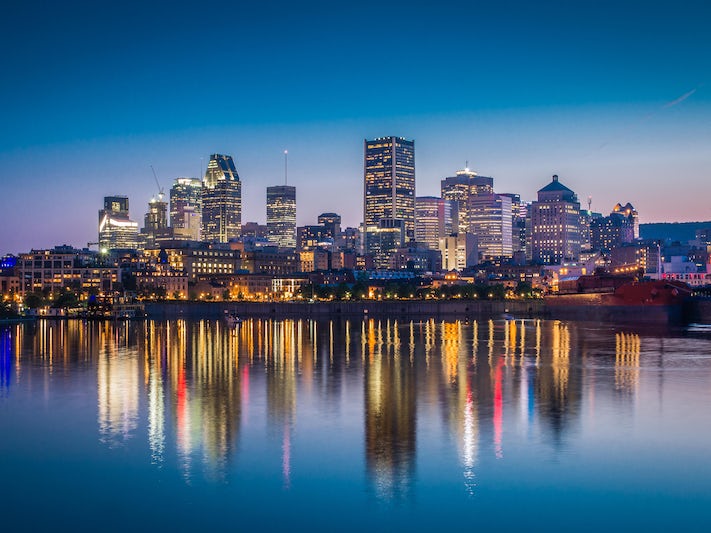 Find Things to Do in Montreal on Viator

Popular Things to Do in Montreal

Food and Drink in Montreal

Traditional Quebec cuisine is hearty, and it's influenced by the two largest ethnic groups in the province, the French and the Irish. Standout items include artisan cheeses (many are not available outside Quebec) and maple syrup that is tapped at local sugar shacks in early spring. (For a decadent treat, try pouding chomeur, a pancake-pudding hybrid with maple syrup sauce.) Other dishes that offer a true taste of Quebec: tourtiere, a traditional meat pie filled with minced pork, beef or wild game; pate chinois, a local version of shepherd's pie; creton, a fatty pork spread with onions and spices; soupe aux pois, a pea soup with ham hock broth. Poutine -- a combination of French fries, cheese curds and gravy -- is available all over Canada but arguably best in Quebec. Gourmet versions feature sophisticated add-ins like lobster and foie gras. In Montreal, don't miss one of the famous bagels (top shops include St. Viateur and Fairmount), wood-fired and both sweeter and denser than their NYC counterparts. They come in several flavors, but poppy seed is the local favorite.

Modavie: It offers mouth-watering Mediterranean cuisine in a beautiful setting overlooking the waterfront and the cobblestone streets of Old Town. Be sure to sample the well-stocked wine bar. (1 rue St.-Paul Ouest; 514-287-9582; open 11:30 a.m. to 3 p.m. daily for lunch)

Stash Cafe: This is a Polish restaurant tucked away in Old Town. It's a perfect spot for a warm and hearty lunch when there's an autumn nip in the air. Try the pierogi or the golabki (cabbage rolls with potatoes and vegetables). (200 rue St.-Paul Ouest; 514-845-6611; open from 11:30 a.m. daily)

Ferreira Cafe: This Portuguese venue that draws business travelers and public figures. On its menu, you'll find meat and seafood dishes, as well as soups and appetizers with a Portuguese influence. (1446 rue Peel; 514-848-0988; open for lunch 11:45 a.m. to 3 p.m. Monday to Friday)

Maison Boulud: Located at the Ritz-Carlton Montreal, it's run by acclaimed chef Daniel Boulud. He puts a modern spin on French culinary tradition with a focus on local ingredients and Quebecois products. Guests can eat in an outdoor dining area overlooking a beautifully manicured garden or enjoy a glass-enclosed greenhouse during cooler months. (1288 rue Sherbrooke Ouest; 514-842-4224; open for lunch noon to 2 p.m.)

Vieux-Montreal: Also known as Old Montreal, this area was home to the city's first European settlers, who arrived in the mid-17th century. Many of the homes and buildings have been restored, and the old city has wonderful boutiques, sidewalk cafes and street performers. The center of the action is Place Jacques-Cartier, a pedestrian mall. Nearby, Vieux Port is one of Montreal's best-loved recreation spots; this waterfront park is a terrific place to take a stroll or sign up for speedboat rides and sunset harbor cruises. You can even rent paddleboats and join a Segway tour.

Parc du Mont-Royal: Bike, walk or even take a horse-drawn carriage ride through Parc du Mont-Royal. Designed by Frederick Law Olmsted (designer of New York's Central Park), it's composed of nearly 500 acres of forest and winding paths and lies atop the mountain in the heart of Montreal. On the way down from the mountain, stop by St. Joseph's Oratory (3800 chemin Queen Mary), a massive domed shrine to Canada's patron saint.

Shopping: Montreal is a shopper's delight. Three major areas include rue Sherbrooke, which is known for its fashionable designer boutiques and gourmet restaurants; rue Ste.-Catherine, located in the downtown area, where you'll find major malls like the Eaton Center; and boulevard St.-Laurent, whose shops, galleries and restaurants offer a more multi-cultural atmosphere. Another area worth seeking out is the funky Quartier Latin, anchored by rue St.-Denis. Don't let bad weather keep you from hitting the shops. If it's rainy or cold, just retreat to Montreal's "underground city," shopping tunnels downtown where you'll find passageways lined with more than 1,000 stores.

Olympic Stadium: Check out the sights in Hochelaga-Maisonneauve, a neighborhood in eastern Montreal. This district played host to the 1976 Summer Olympics, and you can still tour the massive Olympic Stadium (4545 Avenue Pierre-De Coubertin; 514-252-4141). Take a ride to the top of the attached tower for views over the city.

Nature and Science: One intriguing attraction that's fun for kids and adults alike is the Biodome (4777 avenue Pierre-De Coubertin; 514-868-3000). At this zoo and environmental museum, you'll see animals and plants in five habitats: the tropical forest, the Laurentian forest, the Gulf of St Lawrence, the Labrador Coast and the Sub-Antarctic Islands. (The penguins are a fan favorite.) Also nearby are the lovely Botanical Gardens (4010 rue Sherbrooke Est.; 514-872-1400) and the kid-friendly Insectarium (4581 rue Sherbrooke Est.; 514-872-1400). The Rio Tinto Alcan Planetarium (4801 Avenue Pierre-De Coubertin; 514-868-3000) is the fourth element of Canada's largest natural science museum cluster -- the Montreal Space for Life, which offers hands-on immersion.