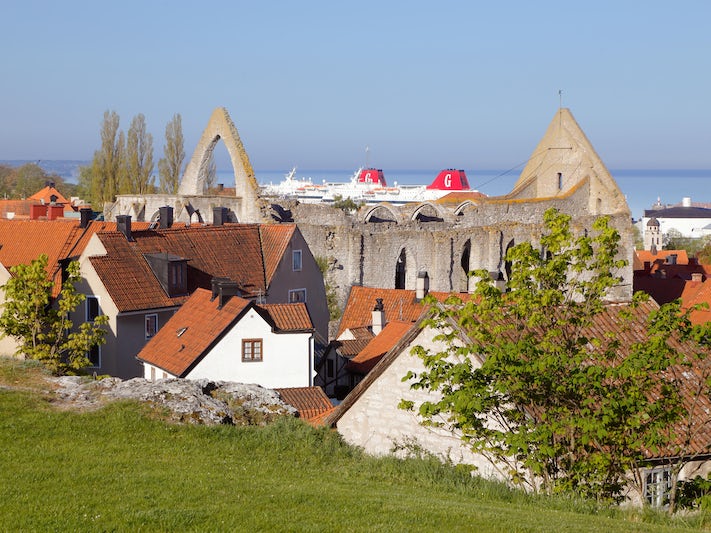 Find Things to Do in Visby on Viator

Popular Things to Do in Visby

Food and Drink in Visby

Anyone who's seen the film Babette's Feast (or eaten meatballs at a branch of Ikea) will know that the Nordic nations are not big into fancy food, but Gotlanders are partial to lamb dishes spiced with local herbs. Smoked flatfish and saffron pancake are other local specialities, as are truffles. And the Swedes love their home baking – look out for cafés serving good bread, pies, cakes and muffins, washed down with good strong coffee.

Italian dishes are also popular; a good spot for a casual lunch with a harbour view would be Florence on Korgsgatan Street, which overlooks the sea. It lies only a short walk left from the tender pier and dishes up hearty fare like Lasagna (SK 85) Pizza (from SK 75) and Fruit de Mer Spaghetti (SK 130).

For a more authentic Swedish experience, hang a right after Florence and wander inland up Hamnagoten (a pretty cobbled street lined with red-roofed houses painted in shades of ochre and cream).

This leads into Donnersplats, an attractive cobbled square where you'll find some typical Swedish cafés, including the Donnerska Huset café (toasted sandwiches SK 39; salads SK 86). One street inland, opposite a pretty little rose garden, is Rosas restaurant, which has a beamed medieval façade and a small garden with seating to the rear.

Push the boat out at the lovely Lindgardens restaurant (just off the main square), where a 'surf and turf' will set you back SK 285 and grilled tuna with mozzarella costs SK 255. Puddings are expensive but spectacular (SK 112 for rhubarb and strawberry millefeuille with ginger marscapone).

The Botanical Gardens to the northwest of Visby (walkable from the port).They're crammed with roses (which also climb up the walls of the city's medieval ruins) and simply lovely. At the south end of the gardens, you'll find the ruins of the Romanesque church of St Olof , which dates from around 1200 AD.

The Burmeisterska Hus (Burmeister House) which lies near the Donnersplats (main square) just inland from the harbour. Built in 1652 for local merchant Hans Burmeister, it's one of the best-preserved Baroque burgher's houses in Sweden and often hosts art exhibitions featuring the work of local and Swedish artists.

The ruined medieval churches of St. Per and St. Hans, which stand side by side at the south end of Donnersplats.

The Museum of Antiquities (Golands Fornsal), which also lies near Donnersplats (just along Strandgatan), contains displays of Viking and medieval artefacts including runic stones, arms and armour, furniture and art.

Visby Market Square (Stora Torget), which contains the ruins of 13th Century St Catherine's Church.. It also has a good selection of bars, cafés and restaurants if you've had enough of sightseeing.

Visby's limestone city walls, which date from the 13th Century, circle the old city and cover 3.5 km. They are studded with 44 towers , each around 60 foot high. The Powder Tower (Kruttornet) overlooks the sea, while the Maiden's Tower (Jungfrutornet) is at the north end and is so called because legend has it that the daughter of a Visby goldsmith was walled up alive in it.

St Mary's Cathedral (on St Hansgatan) dates from 1225 and is the only one of Visby's old churches which is still in use. It contains a spectacular walnut and ebony pulpit from Germany and a 13th Century red marble font.

Grab your bathers, pick up a cab and head off for a swim at one of Gotland's gorgeous beaches; recommended on the island's north coast ( not far from Visby) are Sjalso and Faro beaches.