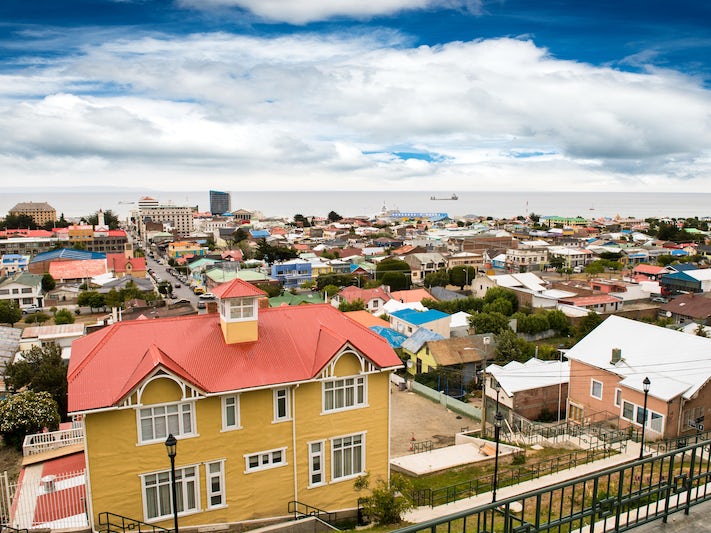 Find Things to Do in Punta Arenas on Viator

Popular Things to Do in Punta Arenas

Food and Drink in Punta Arenas

The only problem with La Tasca is deciding what to order. The Spanish restaurant, in a charming second-floor space overlooking Plaza Munoz Gamero, offers regional specialties such as Patagonian lamb, centolla or fresh king crab, and conger eel. But what about the grilled Basque beef loin, the paella, the squid in ink or the salmon ceviche? With its festive red and yellow tablecloths, attractive murals, and huge windows overlooking the square, La Tasca is a great place to eat, drink and unwind. A typical full lunch, including bread, bottled water and wine, costs roughly $20. Located at Plaza Munoz Gamero 771 in the Sociedad Espanola building.

Want trendy? The stylish Restaurant Puerto Viejo would easily feel at home in any urban restaurant district. All glass and wood and nautical in design, the aptly named “Old Port” restaurant features lamb and steak but specializes in seafood such as its signature abalone salad, eel's cheeks in mustard sauce, king crab, and Chilean sea bass, or corvine, in garlic butter. Lunch costs about $20. If you don't feel like a meal, it's worth stopping by for a drink and an appetizer. On the menu: local beers, a selection of pisco sours, and a wide array of Chilean wines. Best yet, Puerto Viejo, on Avenida O'Higgins 1166, is located just a few blocks from the port terminal.

Some travelers do a South America cruise just to see the penguins – and no wonder. They're enchanting, uninhibited and entertaining creatures. It's kind of like street theater; we watch them, they watch us. Locally, there are two reserves: Otway Bay, a remote colony of about 4,000 warm-water Magellanic penguins and Isla Magdalena, an island that's home to 120,000 seasonal penguins, one of the continent's largest sanctuaries. Be warned: The penguins stick closely to an October-March schedule, generally migrating in early March.

To get a good feel for Punta Arenas, spend some time in the city center. The centerpiece is the tree-lined Plaza Munoz Gamero, dominated by a bronze statue of Ferdinand Magellan, or Hernando de Magallanes, as the explorer is called in Chile. Magellan's ship was blown through the strait that bears his name by a series of gales in 1520. He was the first European to disembark on the famously windy shore. There are two museums worth visiting: Palacio Sara Braun, a national landmark located just across from the plaza, and, just one-half block away, Museo Regional de Magallanes. The Braun mansion, built over a four-year period in the 1890's, is a throwback to the city's Golden Age with its pressed Italian leather walls, hand painted ceilings, French chandeliers, bronzes, and gorgeous parquet floors. The regional museum, no slouch either, was the summer home of a prosperous family at the start of the 20th century. It also has some neat displays of Punta Arenas' past and a natural history exhibit. Unfortunately, neither museum has signs or brochures in English. The cost of admission at both places: 1,000 pesos. The Braun mansion accepts dollars but not euros.

We stumbled across the Cemeterio Municipal almost by accident – and what a great find. After visiting the Sara Braun mansion, we thought we'd pick up the thread and search for her mausoleum. The cemetery, nine blocks north of Plaza Munoz Gamero at Avenida Bulnes 949, looks like a stage set with its elaborately sculpted cypresses, crypts planted in marigolds and pansies, and ornate mausoleums. Punta Arenas, situated at the foot of the Andes, reflects a great mix of cultures – from English sheepherders to Portuguese sailors to Croatian and Spanish colonists. Nowhere is that history more apparent than in this sprawling cemetery, which has one section devoted solely to the English. Braun, a Russian who married a Portuguese wool baron, lies here in perpetuity as well – and the story surrounding her has become such a tourist draw that the Punta Arenas tourism bureau recently rebranded this “open museum full with symbols, art and human feeling” as the Sara Braun Cemetery.

You can't visit Chile and not enjoy the national cocktail, the pisco sour. Nowhere better to do that than at Taberna Club de la Union, a cozy and hugely popular cellar bar on the ground floor of the Sara Braun mansion. For the record, a pisco sour typically is a concoction of pisco brandy, lemon or lime juice, syrup or sugar, bitters and egg whites to create a froth. Some Chileans add a spicy green chile pepper for good measure.