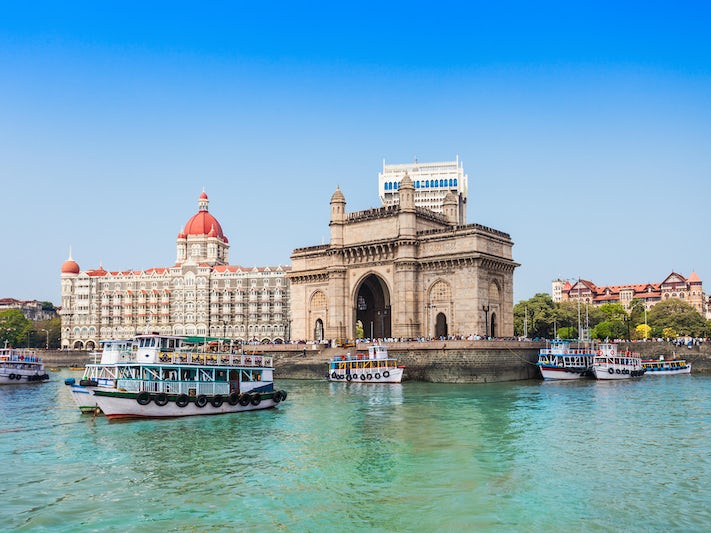 Find Things to Do in Mumbai (Bombay) on Viator

Popular Things to Do in Mumbai (Bombay)

Food and Drink in Mumbai (Bombay)

You'll find cafes, coffee shops, McDonald's (no beef) and quite a few Pizza Huts, but you've come to India, so this is the place to stop and have a really good curry or other local dish. It's also a delight for vegetarians; "veg" and "pure" veg options abound on menus. There are some lovely restaurants in the city, but they can be hard to spot.

Kyber at Fort is like stepping back in time, with its big wooden doors, oil lanterns and weathered wood. It's frequented by international celebrities, including Sir Paul McCartney, Goldie Hawn, Richard Gere and Demi Moore. There's a vast menu of soups, salads, kebabs and curries, plus seafood, chicken, lamb and plenty for vegetarians. (145 Mahatma Gandhi Road, Fort, Mumbai (Near Gateway of India); open daily from 12:30 to 3:30 p.m. and 7:30 to 11:30 p.m.)

Indigo is an uber-modern eatery in a leafy residential area behind the Taj Hotel that would not look out of place in London's West End. The modern, European lunch menu is simple: soups, salads, sandwiches and main courses. All are quite mouthwatering and pricey. A new upstairs balcony offers alfresco dining and serves as a relaxing spot for cocktails. Nearby is the casual Indigo Deli with lengthy eat-in and takeout menus. (4 Mandlik Road, Apollo Bandar, Mumbai; open daily from 12:00 to 3:00 p.m. and 7:00 to 11:45 p.m.)

Trishna is the place to see and be seen in Mumbai. Inside, the decor is nothing special, but the food is. Seafood is a specialty, with king crab, lobster, jumbo prawns and various types of seafood tandoori on the menu, but there are plenty of meat and vegetarian choices, too. Reservations are highly recommended. (7 Sai Baba Marg, Kala Ghoda, Fort, Mumbai; open daily from 11:30 a.m. to midnight)

Table has been a big hit since it opened in 2011. This sophisticated South Mumbai establishment serves up supper club atmosphere and French-American dishes that range from sliders to risottos and quesadillas. Sunday brunch, high tea, daily happy hours and a highly rated wine list add to its appeal for Mumbai elite and tourists alike. (ground floor of the Kalapesi Building, below Hotel Suba Palace, Apollo Bunder Marg, Mumbai; lunch from noon to 4 p.m., dinner from 7 p.m. to 1 a.m.)

Swati Snacks is about as close as a Westerner can get to authentic Indian dining without risking "Delhi belly." The decor is fast-food cafe, but don't be put off. Reservations aren't accepted, so just add your name when you arrive, and join the inevitable queue for a table. There are traditional curry specialties and snacks like pizza, falafel and patties. (248 Karai Estate, Opp. Bhatia Hospital, Javji Dadaji Marg, Tardeo; open daily from 11:30 a.m. to 11:00 p.m.)

The first thing everyone wants to see when they visit Mumbai is the Gateway of India, an ornate arch built to celebrate the visit of King George V and Queen Mary to what was then Bombay in December 1911. It opened in 1924 and used to be the first monument visitors arriving in Bombay saw. The last British troops to leave India passed through the Gateway on February 28, 1948.

Although the arch is a big attraction, it's dwarfed by the Taj Mahal hotel across the road. It opened in 1903 and is an attraction in its own right, as everyone wants a picture taken with the bearded doorkeepers in their white uniforms and turbans. More recently, the hotel gained notoriety as the site of the terrorist attacks on the city in November 2008. The Taj is a great place to take a break from the chaos outside. It has immaculate restroom facilities, great bars and restaurants, and upscale shopping.

Your sightseeing should include a drive along Marine Drive, Mumbai's seaside promenade, past Chowpatty Beach and to Malabar Hill, which is the Beverly Hills of Mumbai. Look out for the Parsi Tower of Silence, where people of the Parsi faith who die are laid out to be eaten by birds of prey and their bones left to disintegrate so they wash into the sea.

Mani Bhavan, known as the Gandhi Museum, is on Laburnam Road in South Mumbai and is a shrine to the man who won independence for India. It's packed with books and photos from his life, along with a glassed-off reproduction of the room in which he lived (during visits from 1917 to 1934). Especially don't miss the dioramas of his life's events; the exhibit is definitely not up to contemporary standards, yet it's haunting and illustrative.

The Jain Temple in Malabar, considered the prettiest temple in Mumbai, is worth a look. (Jainism is one of the many religions in Mumbai and is related to Hinduism.) Two stone elephants adorn the entrance; inside, there's an ornate domed ceiling painted with signs of the zodiac. The last stop while in Malabar should be the Hanging Gardens, which offer great views over the city.

Be sure to also visit Crawford Market, which is packed with stalls selling fruits and vegetables. Spare a glance or two at the building, completed in 1869, with its beautiful Victorian carvings. Also take a peek at Victoria Terminus, another Victorian masterpiece with a strong resemblance to St. Pancras station in London. These days, it's actually called Chhatrapati Shivaji Terminus, but luckily taxi drivers understand Victoria Terminus.

Try to time your visit around the lunch hour to watch the famous dabba-wallas stream out into the city to deliver some 200,000 cooked lunches prepared by housewives for their office-worker husbands. The meals are kept warm in identical dabbas (metal lunch containers). How the lunches end up in the right hands is quite a mystery.

Another must-see is the Dhobi Ghat, Mumbai's central laundry for more than 350 years. Some 4,500 people work there, hand-scrubbing laundry from private citizens, hotels, restaurants and even hospitals all across the city. Take a paid tour, or watch the action from the streets above the Ghat; afterward, wander the adjacent streets for free.

The Chhatrapati Shivaji Maharaj Vastu Sangrahalaya (formerly the Prince of Wales Museum), opened in 1923, is considered one of the 20 best museums in the world and houses a huge collection of artifacts, from weapons from the Mughal Empire to Indian paintings and Greek-influenced figures.

Elephanta Caves, designated a UNESCO World Heritage Site in 1987, form a temple dedicated to the Hindu god Lord Shiva and are believed to have been carved between the 9th and 13th centuries. The complex is full of huge sculpted images of Hindu deities carved in the hard rock, including a colossal 20-foot-high three-headed image of Lord Shiva, depicting his three facets -- creator, destroyer and protector. You reach the caves by motorboat from piers behind the Gateway of India. Boats leave roughly every 30 minutes; journey time is about one hour. You'll need to climb 120 steps to get to the entrance to the caves. It's not such an ordeal if you take your time and shop the souvenir stands that border the stairway. Or you can play Cleopatra and, for fee, climb aboard a litter and be carried to the top by two strong Indian men.

Dharavi Slum tour is a guided 2.5-hour walk through "India's largest slum." It's challenging and often shocking, but it's an unforgettable experience for visitors who climb to rooftops and meander through tiny, dark alleys to see the underground industries that range from plastic and metal recycling to pottery-making and leather tanning. Guides also take you through residential areas where more than a million people reside in tiny Spartan rooms with no plumbing. Visits to schools and the slum markets are included, too. No photos are allowed, and you'll have to wear close-toed shoes.

The enormous Chor Bazaar, also known as Thieves' Market, is one of the most exotic shopping experiences anywhere. Mutton Street shops specialize in antiques, wood carvings, stone sculpture jewelry, furniture and just about everything else under the sun. It's open throughout the year, with most of the shops closed on Friday when it turns into a big flea market. Although real Indian antiques are sold there, be aware that many are knockoffs made locally. As you leave, stroll one of the nearby streets that specializes in breaking down cars with hammers and chisels. It's fascinating junkyard entertainment.

Shopper's Stop is one of the biggest department stores in Mumbai and offers a wide variety of apparel, accessories and housewares. More fun is Fashion Street, in Colaba, which is lined with stalls selling export-surplus clothing. Fabindia stores around the city are a good source of traditional dress for men and women, as well as tablecloths, placemats, pillow covers and other home goods. And, just for fun, visit one of the many shops offering Bollywood-style gowns and wedding apparel glittering with gold and encrusted with jewels.