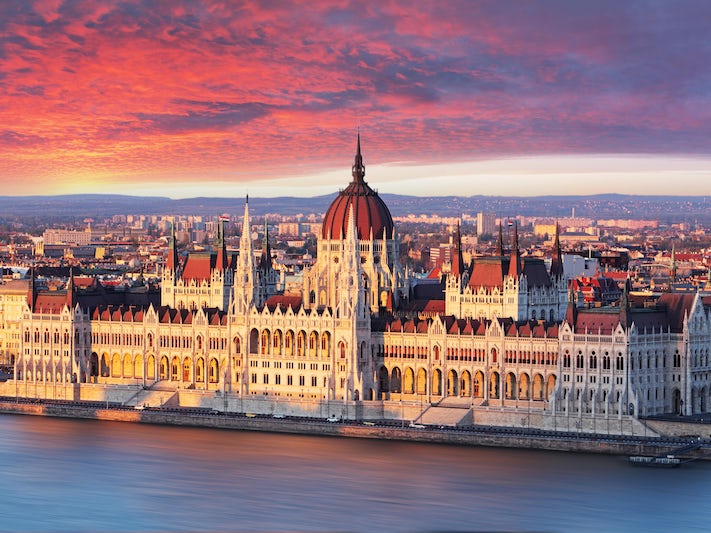 Find Things to Do in Budapest on Viator

Popular Things to Do in Budapest

Food and Drink in Budapest

Influenced by neighboring and former occupying nations such as Turkey, Austria and Serbia, Hungary has tasty national cuisine, much of it seasoned with paprika, which appears on restaurant tables beside the salt and pepper. There are many kinds of paprika, varying in color, aroma and, most importantly, taste -- ranging from sweet to extremely hot. Among the country's signature dishes are goulash, a thick beef soup cooked with onions, potatoes and carrots; fisherman's soup, a mixture of boiled fish, tomatoes, green peppers and paprika; chicken paprika; grilled freshwater fish; and fried or grilled goose liver.

Most meals begin with soup, including a surprisingly good sour cherry soup served in summer months. Always leave room for dessert, often pancakes served with a delicious chocolate rum sauce. Hungary's grape-growing tradition goes back hundreds of years, so don't miss the chance to try some robust red Bull's Blood wine or the lighter, sweeter white Tokaji. Credit cards are widely accepted in restaurants. As for tipping, it's customary to tip your waiter 10 percent, but be sure to check the bill first, as sometimes the tip is included. It's OK to tip in U.S. dollars or euros.

High Note Sky Bar: One of the hippest spots in town, this trendy bar atop the Aria Hotel has incredible city views along with delicious and innovative drinks and bites. The hotel is located next door to St. Stephen's Basillica, so you can see the church's spires from the rooftop perch. You'll find ample seating -- some open air and some in climate-controlled rooms, where roofs can be opened to let in fresh air. Time it right, and it's a great spot to catch the sun set. While you're visiting, spend some time touring the music-inspired hotel, which also features a ground-floor bar dedicated to Louis Armstrong and a gourmet restaurant. (Hercegprimas Utca 5; +36 20 438 8648; open daily from noon to midnight.)

Ruszwurm: Technically a cake shop, this quaint and atmospheric cafe opened in in Buda's Castle District in 1827 and is one of the oldest in the city. As it's so small, it can be hard to get a table, but the wait is really worthwhile, and it's a lovely place to stop off for a light(ish!) lunchtime snack. The cakes and pastries are sublime; the hardest part is deciding which one to have. (Szentharomsag Utca 7; +36 1 375 5284; open daily from 10 a.m. to 7:30 p.m.)

Gerbeaud: Long the centerpiece of Budapest's cafe society, Gerbeaud is more than a sweet shop -- it's a Hungarian cultural institution. Known for its coffee and torte cakes, the cafe has classic high ceilings with crystal chandeliers, polished wood and marble, and thick curtains. Little has changed since it opened 150 years ago. Situated on Pest's Vorosmarty Square, the neoclassical building also houses the Onyx, a microbrewery and gourmet restaurant. (Vorosmarty Ter 7-8; +36 1 429 9000; open daily from 9 a.m. to 9 p.m.)

Gundel: For elegant dining, Gundel lives up to its reputation. The award-winning restaurant, open under its current name since 1910, is located in a late 19th-century palace in City Park, just a two-minute walk from Heroes' Square. Gundel, with its innovative menu, is known -- and deservedly so -- for creating new spins on traditional classics. It can be a little formal, as in the evening men must wear jackets, but the Sunday lunch buffet is less so. (Gundel Karoly Utca 4; +36 1 889 8111; open from noon to 11 p.m. Monday through Thursday, noon to midnight Friday and Saturday, 7 p.m. to 11 p.m. Sunday; Sunday brunch is served from 11:30 a.m. to 3 p.m.)

Karpatia Etterem: A local favorite for special outings, Karpatia Etterem, with its medieval interiors, will remind visitors of Matthias Church. Situated in the courtyard of a former monastery, the restaurant specializes in traditional Hungarian cuisine, accompanied by traditional gypsy music. It also offers Mediterranean, Asian and Latin American fare. The restaurant is more formal and romantic, while the casual brasserie near the Pest side of Elizabeth Bridge offers lunch and snacks in addition to a dinner menu. (Ferenciek Ter 7-8; +36 1 317 3596; open 11 a.m. to 11 p.m. Monday through Friday, 5 p.m. to 11 p.m. Saturday and Sunday.)

Ruin Bars: Not simply one location, ruin bars collectively encompass a number of trendy bars found throughout Budapest. These bars stared in the early 2000s, when buyers purchased derelict buildings with a mind toward turning them into bars. To save money, proprietors filled them with mismatched, second-hand furniture and random pieces that serve as art. Over the years, they've become hip watering holes, where patrons gather among the clutter and sip drinks like beer and palinka, a grappa-like liqueur guaranteed to set fire to your stomach. During the day, ruin bars are relatively peaceful, with people lingering over newspapers while quietly chatting. At night, some heat up, with bright lights and DJs. Visit the first ruin bar, Szimpla Kert, or funky Csendes -- which features creepy vintage toys nailed to the walls -- or any of the dozens of ruin bars you can find throughout the Pest side of the city.

The Castle District: A maze of cobbled streets and medieval courtyards, the Castle District is Budapest's crowning achievement -- literally. It hangs grandly above the city on the Buda side, and the lovely Matthias Church that is its centerpiece is known locally as "the coronation church." Austria's Franz Josef was crowned king of Hungary there in 1867 to the strains of Franz Liszt's coronation mass, composed especially for the occasion. Today, as it has for centuries, the rampart next to the 700-year-old church offers incomparable views of the Danube and Pest across the river. There's also a tourism office next to the church. (Open daily from 10 a.m. to 6 p.m.)

The scene of battles and wars since the 13th century, the district also is home to the former Royal Palace, one of Hungary's most important national symbols. There are shops and restaurants in the complex in addition to a number of museums that include, notably, the Budapest History Museum and the House of Hungarian Wines. The wine museum houses more than 700 wines from the country's 22 growing regions. For a few forints, samples are available. (Szentharomsag Ter 6; + 36 1 900 9071; open daily, noon to 8 p.m.)

Andrassay Avenue: Almost 2 miles long, Andrassy Utca is the city's grandest boulevard, considered so special that the street was granted World Heritage status by UNESCO in 2002. There, you'll find the stunning State Opera House, opened in 1884 (guided tours at 3 p.m. and 4 p.m. daily); chic boutiques and grand villas with gardens; Franz Liszt Square with its open-air cafes; and, at the very end farthest from Danube, Heroes' Square. No visit to Budapest would be complete without a walk around the magnificent square, dominated by the 118-foot high Millenary Monument. The cenotaph is topped by the Archangel Gabriel, credited with converting the pagan Magyars to Christianity. At the base of the column are seven figures on horseback, representing the Magyar tribes.

Jewish Quarter: In the late 1930s, the Jewish Quarter was a thriving community with about 200,000 Jews. Most perished in the Holocaust. Today, the Great Synagogue, the world's second-largest after Temple Emanu-El in New York City, dominates the neighborhood. Built between 1854 and 1859 by a Viennese architect, the synagogue, with its onion-shaped domes, looks Moorish. The synagogue, closed Saturdays, seats 3,000 people. The complex also includes a Hall of Heroes, where the Monument of Hungarian-Jewish Martyrs was erected in 1991; a Jewish Museum; and a Holocaust memorial room.

Shoes on the Danube: It's not in the Jewish Quarter, but the memorial -- on the riverbank, just south of the parliament building -- is especially moving. The simple memorial, installed in 2005, features 60 pairs of cast-iron shoes, representing thousands of Jews who were shot on that spot by soldiers in World War II. Many fell or were pushed into the icy Danube and died.

Margaret Island: A 1.5-mile-long island in the middle of the Danube, Margaret Island is a green oasis in Budapest, with lush trees, lots of flowers and trails for biking, walking and running. It isn't open to motor traffic, except for buses. The island features restaurants and bars along with a small zoo. To get to Margaret Island, take the Margaret Bridge; coming from Pest, the island entrance is on your right. (It's on the left coming from the Buda side.)

Szechenyi Baths: Located in a sumptuous yellow building in City Park next to Heroes' Square, Szechenyi is the largest thermal bath complex in Budapest and one of the biggest in Europe. It's where friends come to meet, gossip and relax in healing waters that are fed by the 120 thermal springs that feed the Danube. There are indoor and outdoor pools of different temperatures, and it's not unusual to see bathers playing chess on floating game boards. Massages are also available. Prices begin at less than $20 for entry and locker rental. Individual changing rooms can also be rented, along with towels, robes and other items. It's worth bringing flip-flops if you have them, as they're not available. Tickets can be purchased online in advance, from authorized outlets in the city and at the baths. Note: You can pay by credit card at the cashier's desk at the entrance to the baths, but once inside, only local currency is accepted at the booths if you want to buy treatments or rent additional items. (Allatkerti 9-11; +36 1 363 3210; open daily 6 a.m. to 10 p.m.)

Hospital in the Rock: A lesser-known but fascinating attraction is the underground hospital hewn into caves beneath Castle Hill. The subterranean hospital was used during the World War II siege of Budapest and 1956 revolution. Wards and rooms contain original equipment and are brought to life by waxwork figures (some of them rather creepy). The entry fee includes a short introductory film and guided one-hour tour. It can get chilly in the tunnels, so bring a jacket. Alternatively, visitors can borrow nurses' capes at the entrance for free. (Lovas Utca 4/c; +36 70 707 0101; open daily from 10 a.m. to 8 p.m.)