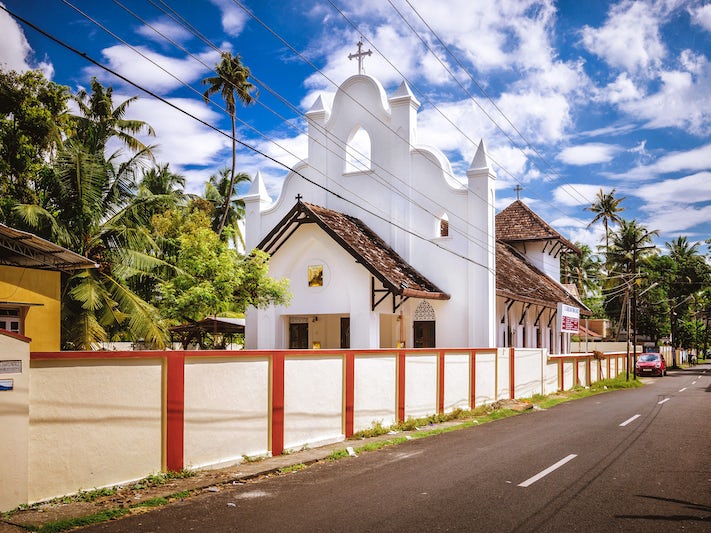 Find Things to Do in Kochi (Cochin) on Viator

Popular Things to Do in Kochi (Cochin)

Food and Drink in Kochi (Cochin)

Cafe Crafters: Above Crafters, a huge antiques shop in an ex-spice warehouse whose goods hail from all over India, this cafe serves moderate-priced Kerala food, like shrimp and fish curries, and also Western meals like fish and chips. A balcony overlooks the street, near the Dutch Palace. (6/40 Jew Town Road, Mattancherry; +91-484-2223345; open 10 a.m. to 6:30 p.m.)

Rice Boat: This gourmet restaurant specializing in Kerala seafood, like giant tiger shrimp, soft-shell crab, spiny lobster and fish, is worth a splurge. Designed to resemble a traditional rice boat, with big picture windows facing the Arabian Sea, it's in the Vivanta by Taj Malabar - Cochin hotel, near the cruise terminal. (Willingdon Island; 0484-6643000; open daily, 12:30 to 3 p.m. and 7:30 to 11 p.m.)

Dutch Palace (Mattancherry Palace): Vivid, well-preserved murals depicting Krishna, Shiva and other Hindu deities in scenes from the Ramayana epic and royal robes are in this 16th-century palace built by the Portuguese for the Maharajah of Kochi. The Dutch renovated it a century later. (Palace Road, Mattancherry; +91-484-2226085; open Saturday to Thursday, 10 a.m. to 5 p.m.)

Paradesi Synagogue: India's oldest synagogue, built in 1568, features over 1,000 hand-painted blue-and-white floor tiles from Guangzhou (Canton), China (each different), chandeliers from Belgium, colorful glass lamps, a rug from Ethiopia's last emperor and an 18th-century white clock tower. Paintings chronicling the history of the Jews in Kerala, who first arrived as traders almost 3,000 years ago, and their cordial treatment by the region's Hindu rulers are in a separate room. Only a handful of Jews remain, who take off their shoes before entering and wear different-colored clothing for holidays, Hindu-influenced customs. Surrounding streets are named Jew Town due to the long history; the Jewish-owned Sarah's Embroidery down the block has a Muslim shopkeeper. (Jew Town Road, Mattancherry; +91-1800-4254747; open Sunday to Thursday, 10 a.m. to noon and 3 to 5 p.m., closed Jewish holidays)

Chinese Fishing Nets: The iconic photograph of Kochi, these huge cantilvered nets on wooden poles, operated by a weight and pulley system, are in a style introduced by 15th-century Chinese traders. You can even buy seafood from fishermen behind the nets, and the restaurants on Tower Road will cook it for you. (Vasco da Gama Square on River Road, Fort Kochi is a good viewpoint from which to watch the fishermen.)

Backwater Cruises: A houseboat tour, typically in a thatched-roof wooden barge, past coconut palms, rice paddies, small villages and Chinese-style fishing nets along Kerala's lagoons, lakes and canals is a relaxing way to see local life. Ideally, it's a multiday journey where you sleep on your houseboat and eat Kerala food prepared by your chef, since houseboats leave from Alappuzha (Alleppey), a one-hour or more drive south of Kochi. But, full-day or even half-day boat and canoe village cruises from Kochi are available.

Cooking Classes: Learn to cook Kerala food, like seafood coconut milk curries with local spices, with Nimmy Paul, a cooking teacher who often works with cruise lines and has given demos at the Culinary Institute of America in Napa. (Variamparambil, near Kattiparambu St. Francis Assisi Church, Kannamali, nimmypaul@vsnl.net)

Kathakali Dance: Kerala's famous centuries-old dance dramas, where actors in elaborate and grotesque makeup, ornate headdresses and stylized gestures enact stories from Hindu epics, take place at night at various venues and hotels. See one if your cruise starts or ends in Kochi -- or if you return. (Kerala Kathakali Centre, KB Jacob Road, Fort Kochi; +91-484-2217552/2215827; makeup from 5 p.m., show from 6 to 7:30 p.m.)<

Kerala Folklore Museum: In a beautiful building converted from old Kerala temples and houses, over 4,000 artifacts, from all over Kerala, from masks, pottery, Stone Age objects to art, are displayed. There's also a theater with a striking 17th-century wood ceiling for cultural events. The state's top museum is worth a trip to the new city. (Folklore Junction, Thevara, Ernakulam; +91-484-2665452/+91-944-6076499; open 9 a.m. to 6 p.m.)

St. Francis Church: India's first church built by Europeans, this 16th-century Portuguese-style church is where Vasco da Gama, the Portuguese explorer who discovered India in 1498, was buried after he died in Kochi in 1524. His body was later shipped to Lisbon. Built as a Catholic church by Franciscans, it's now an Anglican church. Traditional Indian punkah ceiling fans are inside. (St. Francis Church Road, Fort Kochi; +91-484-2217505; open Monday to Saturday, 8:30 a.m. to 5 p.m.)