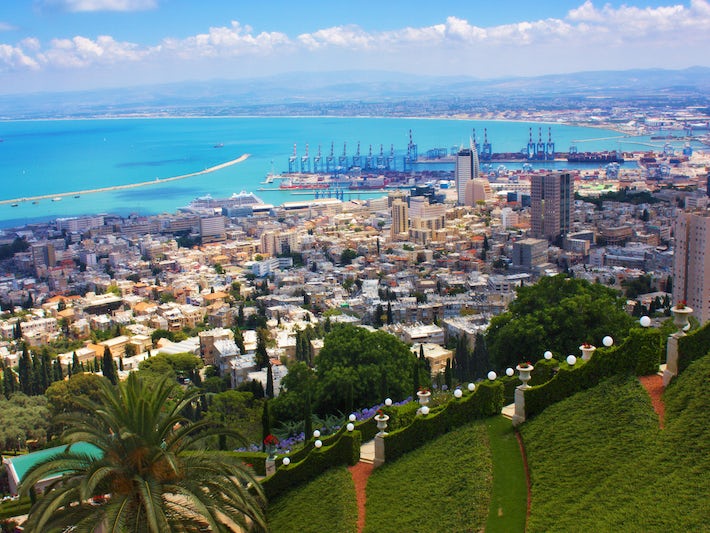 Find Things to Do in Haifa (Tel Aviv) on Viator

Popular Things to Do in Haifa (Tel Aviv)

Israeli lunches can be as lavish or as simple as you want, and Haifa is home to some excellent restaurants. What everybody should try, though, is falafel, the Israeli staple of chickpea patties. It's available in hole-in-the-wall places, special falafel fast-food joints or more upscale restaurants. Take a toasted pita, stuff it with salad and spicy salsas or pickles, cram some fried falafel balls in on top (the coriander and chili ones are best), and pour tahini sauce (sesame paste mixed with garlic and lemon juice) over the whole ensemble. It's cheap, delicious and unbelievably filling.

Haifa's various districts are known for different cuisines and restaurant types. Downtown, look for Arabic restaurants; the Bat Galim Promenade along the seafront has the best fish restaurants; chichi Carmel Centre on top of Mount Carmel is home to masses of coffee shops; and Wadi Nisnas is the place to go for the best falafels and a colorful ethnic food market.

Abu Yusuf (1 Ha-Meginim Street, off Paris Square near the port; 04 866 3723) specializes in typical Israeli and Arabic cuisine -- falafel, hummus and grills. It also has a massive salad bar.

Falafel HaZkenim (HaWadi 18; 04 851 4959) has the best falafel in Haifa, according to many. Located on a side street in the Arab section of the city, HaZkenim is a hole in the wall with a limited menu, but the falafel is delectable and filling.

The Sea of Galilee: Home to many Biblical landmarks -- from the Yardenit baptismal site, where Jesus was reputed to have been baptized, to the coastal area of this now-inland lake, where he is said to have preached his sermons to the Mount of Beatitudes (setting of the Sermon on the Mount) -- the region is also uncommonly scenic. Don't miss a trip to Golan Heights, site of a Syrian incursion but also offering dramatic vistas over the sea. You might also enjoy a visit to the artsy town of Safed, known for its galleries and ancient synagogues. It's a long day, as some cruise lines incorporate visits to Nazareth to visit other Biblical sites.

Baha'i Gardens: The gentle Baha'i faith believes in the unity of all the major faiths, tolerance, peace and justice. Its world headquarters in Haifa centers on the gold-domed Shrine of the Bab, an elaborate structure housing the remains of the Bab, the herald of the Baha'i prophet Baha'Allah. There, immaculate terraced gardens cascade down the cliff face, brilliant with banks of flowers, parades of cypress trees and manicured lawns that are beautifully illuminated at night. The gardens are open 9 a.m. to noon daily (inner gardens); 9 a.m. to 5 p.m. daily (outer gardens). Free tours are given in English daily at noon, except Wednesdays. To walk through the entire garden complex, you must have a guide.

Elijah's Cave and the Carmelite Monastery: Elijah, the 9th-century B.C. Hebrew prophet, is venerated by Jews, Christians, Muslims and Druze. So, not surprisingly, the cave on Mount Carmel where he lived and meditated is an important pilgrimage spot. There's an elaborate domed chapel inside the cave, today used for many religious events and festivals. (It's open Sunday through Thursday, 8 a.m. to 6 p.m., and Friday, 8 a.m. to 1 p.m.) Above the cave is the beautiful Stella Maris Carmelite Monastery, housing wonderful paintings and dazzling Italian marble. The current basilica dates to 1836, although the Carmelite order of monks dates to the 12th century (open 6:30 a.m. to 1:30 p.m. and 3 to 6 p.m.).

Haifa's Beaches: Haifa has eight beaches, each one individual. The Surfers' Beach in Bat Galim (close to the port) is unique in that it faces north and catches wind rolling down from Mount Carmel, providing challenging and exhilarating windsurfing conditions. The other seven have breakwaters to create more gentle swimming areas. There you'll find sand, beach cafes, pitches for beach volleyball and soccer, deck chairs and sun umbrellas. Dado Beach and Zamir Beach, right around the headland, heading west from the port, are two of the finest with boardwalks and plenty of restaurants, bars and restrooms. The quickest way to get there from the port is by taxi, but trains and buses do stop at the nearby Haifa Hof HaCarmel Railway and Bus Station.

Nazareth: Once a small village, Nazareth is a bustling town with many churches that commemorate the original home of the Holy Family and the ministry of Jesus. The most important church, the Basilica of the Annunciation, marks the spot where the Angel Gabriel visited the Virgin Mary. It's the largest church in the Middle East and is a highlight of every tour. Visits to Nazareth also include Capernaum, where Jesus performed the miracle of the loaves and fishes, and sites around the beautiful Sea of Galilee. For reasons of practicality -- these places are not especially close together -- it's best to take a guided tour.

Akko: Just 30 minutes from Haifa by train, Akko is famed for its incredible Crusader City, an 800-year-old system of underground caverns, halls and crypts where the Crusader knights hid from invaders. The city also has massive fortifications, a fishing harbor dating back 1,400 years and a bustling souq (Arab market).

Clandestine Immigration Museum: Visit the Clandestine Immigration Museum on Allenby Road for a different take on contemporary Israeli history. The museum deals with the thousands of Jewish refugees who tried to flee to Palestine to escape persecution by the Nazis in World War II, focusing particularly on the ships that brought them to the Promised Land (which, at the time, was under the British Mandate). Many refugees were denied admission and were kept in detention camps in Cyprus. Visitors can explore a couple of boats and a submarine and can peruse plenty of archive material. It's open 8:30 a.m. to 4 p.m. Sunday to Thursday and 8:30 a.m. to noon Friday.

Step Routes: The Haifa Tourist and Leisure Board has marked out four color-coded routes that get you around the city by hundreds of stone staircases that bypass the zig-zag roads on the mountainside (ideally starting at the top and working down). The routes take you past quieter suburbs and through narrow alleys to the Baha'i Gardens, the fashionable Carmel Centre on top of Mount Carmel and the German Colony and foodie area of Wadi Nisnas. Pick up a step route map first at the Haifa Tourist and Leisure Board at 48 Ben Gurion Avenue.

Antique Shops: Get off the Carmelit at Massada Avenue, and poke around the tiny antique stores, art galleries and knickknack shops. This is a quieter residential neighborhood that gives you a feel for how locals live and offers a pleasant couple of hours' browsing.

Ein Hod: Ein Hod is an artists' settlement on the western slopes of Mount Carmel that's surrounded by olive groves and is specifically dedicated to the pursuit of art, crafts and sculpture. You can visit the village, check out the galleries, watch the craftspeople in their workshops, eat in the cafes or set up your own easel in the fields and paint away. The best way to get there is by taxi; there are buses, but the nearest stop is 1 km from the village.