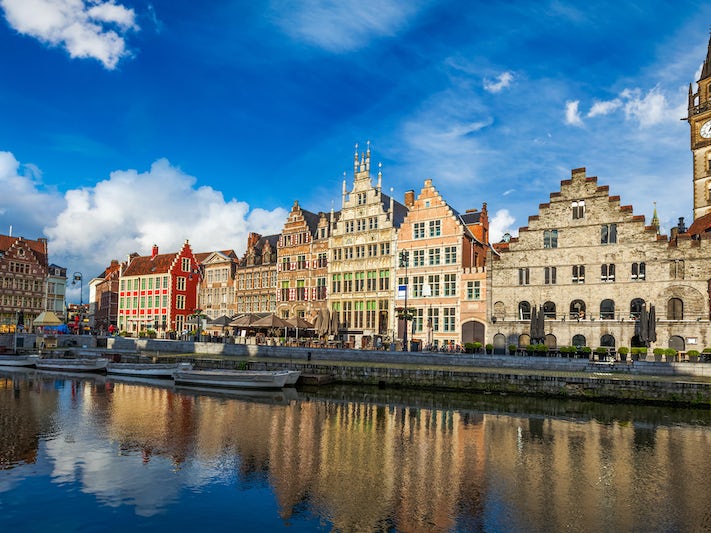 Find Things to Do in Ghent on Viator

Popular Things to Do in Ghent

Food and Drink in Ghent

Best for Local Eats: Tete-a-Tete (Jan Breydelstraat 32) has a terrace room overlooking the canal. The restaurant serves Belgian cuisine with main dishes, ranging from 17 to 26 euros.

Best for a Light Meal: For something light, Brooderie (Jan Breydelstraat 8), opposite the Design Museum, offers two tiny tea rooms, serving freshly made soup with bread and vegetable pies for about 8 euros. Or, try Souplounge, located at Zuivelbrugstraat 6 (by the bridge), which is part of a chain of eateries that serve light meals and snacks at moderate prices.

Best for International Cuisine: La Malcontenta (Haringsteeg 7), in the Patersol area, serves cuisine from Spain and the Canary Islands, featuring main courses that range from 14 to 21 euros. Paellas are a specialty. If Spanish food isn't your thing, Patersol is filled with restaurants, so choices abound.

Walking Tour of the City: The best way to see Ghent's highlights is via a self-guided walking tour. You can pick up walking tour maps in the tourist office (see Getting Around). The walk can take from two to four hours, depending on which sights are visited and whether or not you pause for lunch.

A series of three linked squares makes up the city's civic and religious center, anchored by Scheldt Gothic St. Nicolas' Church, the 14th century belfort, the flamboyant Gothic-Renaissance staduis (city hall), the Civic Theater and St. Baaf's (St. Bavo's) Cathedral. Start your tour with a birds-eye view of the city. Take the elevator or stairs to the top of the belfry, which is a World Heritage Site. (Admission is 3 euros.) The tower rises above the Lakenhalle (cloth hall), representing the industry that created Ghent's wealth.

While entry into the opposite St. Baaf's Cathedral is free, you'll need to pay a 3-euro admission fee to see "The Adoration of the Mystic Lamb," one of the world's earliest oil paintings, completed in 1432 by Flemish primitive artist Jan Van Eyck. The 20-paneled altarpiece represents the glorification of Christ's death. The free part of the cathedral exhibits other art treasures, such as a Rubens and lovely stained glass windows.

Follow the walking guide route past Sint-Jorishof -- reputed to be the oldest hotel in Europe -- to Romanesque and Gothic St. Jacob's Church, which dates from the 12th century, and on to Vrijdagmarkt (Friday Market). The large square is nicely rimmed by Flemish-style former guild halls, cafes and design shops; it was once the city's most important focal point because of its commercial connections. Statesman Jacob Van Artevelde's statue graces the center. His close links with the English king meant that Ghent and Flanders remained neutral and prosperous during the Hundred Years War. A produce and clothing market is located there on Fridays.

Exiting the square to the west, the street will take you past the boutiques of high-fashion Flemish designers and to the Zuivelbrug that crosses the Leie River to Patershol -- the city's preserved medieval quarter. The two impressive 17th century houses that lie straight ahead are embellished with depictions of the Six Works of Mercy and the Five Senses.

Patershol's lanes are utterly charming, so have a wander, study the restaurant menus, and take a look at the bed-and-breakfast inns. Kraanlei runs along the canalized river, past Alijn Hospice -- tiny attached cottages, set around a courtyard, that once served as a refuge for women. You can walk inside for a look without paying the entrance fee for the early 20th century lifestyle exhibits.

Down the street, the massive 12th century Gravensteen (Castle of the Counts) overwhelms everything around it. A giant spider web, an artifact from an art exhibition, adorns the facade. Appropriately, the inside is equally sinister, with examples of torture devices, a dungeon and guillotine. Nearby buildings, housing former fish and meat markets -- now exhibition halls for East Flanders produce -- face the canals.

Crossing the Lieve River, turn left on Jan Breydelstraat and pass a charming waterside park and the Design Museum with its displays of furnishings, from the Renaissance to Art Nouveau, for which Belgium is justly famous. Canal cruises leave from there (Korenlei and Graslei). In olden days (11th century), the basin was Ghent's principal commercial harbor.

Sint-Michielsbrug (a bridge) provides a splendid view of the city and the hulking, adjacent St. Michael's Church and Het Pand, a handsome former Dominican friary that now belongs to Ghent University.

Shopping: Head for the designer boutiques in Vrijdagmarkt. Het Oorcussen is the most notable of the shops, but head to Home Linen, Korenlei 3, for handmade Belgian linens. Pedestrian-only Veldtstraat, running south from Korenmarkt, is lined with the city's department stores -- C&A, FNAC and Inno.