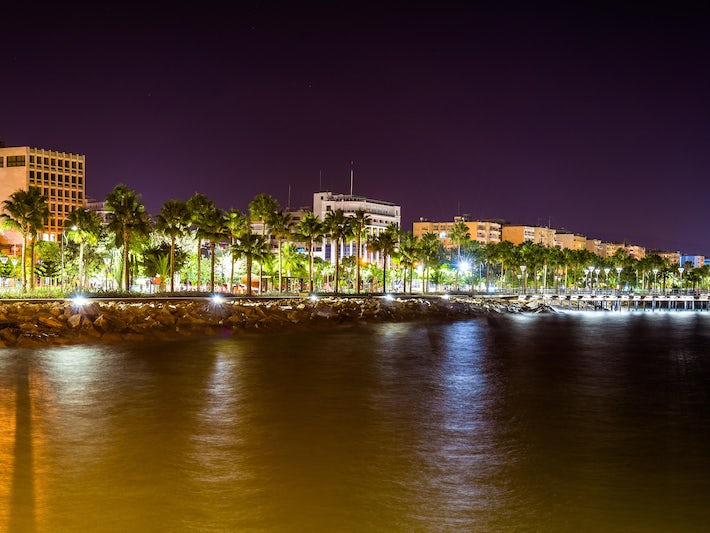 Find Things to Do in Limassol on Viator

Popular Things to Do in Limassol

Food and Drink in Limassol

Limassol is packed with excellent restaurants. It has every kind of fast food under the sun, from T.G.I. Friday's to Pizza Hut, as well as some expensive, gourmet restaurants that are done more justice at dinner than at lunch. But, you can find plenty of places to have terrific local lunches, too.

If you want the full Cypriot meze, allow all afternoon, and skip breakfast. You can get meze in any taverna. It's usually better as you venture farther from the tourist strip. Meze consists of lots of small dips, salads, sausages and pieces of seafood to start. That's followed by a heftier main course of meat or fish, vegetables and potatoes, rice or fries and then sweet baklava and other pastries or fruit. More and more things will keep appearing, so pace yourself! Some places specialise in fish, others in meat.

For a really good meze, go to Limanaki at the Amathus Hotel, located on the main hotel strip west of town on Amathus Avenue. It's an award-winning upmarket fish taverna right on the beach. Although the restaurant was created by the hotel, it feels authentic, and the quality is fantastic. Try the meze, or stick to the day's catch. Some dishes have classy twists, including stuffed calamari.

For something unusual, Ta Piatakia is a quirky little restaurant in the town center. The room is festooned with plates -- on the walls and hanging from the ceiling (the name means "little plates") -- and the food is exciting and highly imaginative Cypriot cuisine with a twist. There's bacon-wrapped feta, baked cherry tomatoes in a sweet and sour herb dressing and feta with duck. (Nicodemou Mylona 7.)

Lunch at I Orea Ellas makes for a great day trip; it's in the village of Vouni (also the location of an herb farm and the Cyprus Donkey Sanctuary, which you can visit to "adopt" a retired working donkey). The taverna's owner, Mrs. Phaedra, cooks authentic, regional Greek food with a Cypriot twist and makes restina wine on the premises. It's a good day out for families.

Kourion, some 19 kilometers west of Limassol, is the island's most important archaeological site. It features a beautiful amphitheater, which overlooks the coast, and extensive excavations of a Roman city-kingdom that dates to 200 B.C.

Closer to the town (15 minutes' drive from the port) is the 13th-century Kolossi Castle, a fortified tower that's one of the last reminders of the occupation of the island by the Knights Hospitaller. Although the castle is essentially an empty shell, you can see old coats of arms engraved on the walls and the remains of an ancient sugar mill on the grounds. Climb to the top and admire the view; the castle was strategically positioned to survey the surrounding landscape and warn of enemies approaching. It was originally known as a commandery, and it was from here that the Commanderia fortified wine originated -- you'll see it for sale all over the island.

In Limassol itself, you can walk around the chunky, medieval Limassol Castle at the pedestrianized old center. Today, it's surrounded by smart tavernas and hip bars and a very pleasant lunch spot. In 1191, Richard the Lionheart married Berengaria of Navarre in the original castle there, but today's fortress is a mere 420 years old. The prison cells in the basement were in use as recently as 1950. (Open 9 a.m. to 5 p.m., Tuesday through Saturday, and 10 a.m. to 1 p.m. Sunday)

The Troodos Mountains are the spine of forested hills that run, east to west, across the island's center. From the top, there are amazing views as far as the Turkish coast (on a clear day), right across the Turkish-occupied northern sector. Follow the walking trails in the forest, and try fresh, barbecued mountain trout at a village taverna. Visit Kykkos, a beautiful and incredibly wealthy monastery, housing incredible icons and gold mosaics. Do this circuit in a rental car or book a tour -- the ones in four-wheel-drive vehicles are best, as the tours head off road to visit impressive waterfalls and bump down the forest trails. Try Ascot Tours if you're booking independently: www.ascotrentacar.com.

Wine enthusiasts should visit Omodhos, the island's principal wine-growing village, located some 40 minutes from Limassol. The cobbled centre is pleasant to stroll around in for an hour or so, and there are some good tavernas for lunch, as well as wineries that offer tastings.

Heading west, spend the day in Paphos, less than an hour from Limassol on the new motorway. You can check out the mosaics and the Tombs of the Kings (impressive excavations), as well as the very attractive harbor, which is surrounded by cafes and tavernas and guarded by a medieval fortress. Farther afield, along the dirt tracks of the Akamas Peninsula, you can explore a wild and rugged area of protected countryside on the island's northwest tip. (It helps if you're in a four-wheel-drive vehicle.)

Cyprus is the island where Aphrodite allegedly rose from the foam, and Petra tou Romiou -- the spot where the miracle happened -- is on the old coast road from Limassol to Paphos. Although undercurrents mean the swimming isn't especially safe, it's a popular beach. A huge chunk of the chalky cliff broke off and sits in the water, creating a scenic stretch of coast. Most island tours make photo stops there.

If you have children in tow and it's unbearably hot, head for the Watermania Waterpark at Fasouri, a suburb of Limassol. It's the biggest waterpark on the island and has the biggest wave pool in Europe, with slides and rides for all ages.

Pick up a free booklet on walking trails from the tourist office, and plan a hike in the Troodos along one of the marked trails. The Caledonia Trail, for example, takes a couple of hours, downhill all the way, criss-crossing a river on stepping stones to the cascading Caledonia Falls, where you can swim in a mountain pool. There's a trout farm and restaurant (Psilo Dentron) at the bottom. From there, you can order a taxi back to your car at the top after a barbecue lunch.

For another easy and stunning walk, travel along the Avakas Gorge, north of Paphos, through a dramatic canyon. It's got a cliff-top taverna (The Last Castle) at the entrance, offering barbecue lunches and meze with breathtaking views across Akamas and the Paphos coast. An ordinary rental car (not a 4WD) will get you to the start point.

When the weather's not too hot, Nicosia -- the last divided capital in Europe (half Greek Cypriot, half Turkish Cypriot) -- is a fascinating day out and only an hour or so from Limassol by car. The center is encircled by massive ramparts, and the pedestrianized Laiki Yitonia district is fascinating, featuring narrow alleys, lined with craft workshops and tavernas under the shade of cooling vines. Visit the Archaeological Museum and St. John's Cathedral, or cross into the Turkish-occupied North at Lidra Street (take your passport) to look at the mosques, markets and 19th-century mansions. A good street map is essential.

Limassol is not known for its beautiful beaches, although it's a major seaside resort. All beaches in Cyprus are public, so you may feel free to visit one of the hotel beaches, all of which are along a strip in the Amathus area, west of the town center. Most of the beaches are narrow, though, with gritty sand. The municipal beach, at the eastern end of the strip (and clearly marked on the free Limassol maps given out by the tourist board), has cafes, water sports and public restrooms. The broad promenade there comes to life every evening with locals strolling, jogging and taking after-work dips.