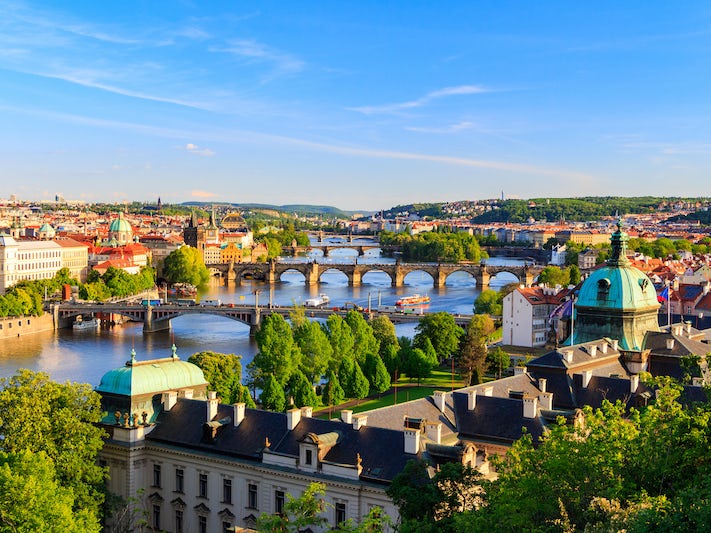 Popular Things to Do in Prague

Prague, the capital of the Czech Republic, is one of those incredible old European port cities that makes the bucket list of nearly every die-hard cruiser. It's a frequent stop on European river cruises and absolutely worth spending an extra day or two since there's no way to see everything in this large city in a single day. Explore Prague's history on a shore excursion to the Jewish Quarter, Prague Castle or its historic center, which is actually a UNESCO World Heritage Site. Visitors should also consider booking an excursion to any one of the city's incredible and varied museums, including the Cold War Museum and the Czech Museum of Music.

Summer is peak travel season in Prague, thanks to comfortably warm temperatures, but many cruisers also visit in winter for a chance to see the city's legendary Christmas markets. Czech is the official language, though English is becoming increasingly common in touristy areas. Official currency is the Czech crown.

Find Things to Do in Prague on Viator

Food and Drink in Prague

Most restaurants accept credit cards, but don't include the tip on it or your generosity will likely go to the owner. It's best to tip in cash, 10 to 15 percent of the check. It's perfectly fine to use U.S. dollars or euros.

Villa Richter - Piano Nobile: Villa Richter is situated on the eastern hillside of Prague Castle in the lower part of the oldest vineyard in Prague and Bohemia, founded by St. Wenceslas in the 10th century. The restaurant Piano Nobile offers both a seasonal menu and original Prague cuisine, as well as the best Czech, French and Italian wines. Due to its location, guests can also enjoy an amazing view of the city. Some walking is required to reach its entrance. (Stare zamecke schody 6/251, 118 00, Praha 1, Prazsky hrad; 420 702 205 108; open daily, 11 a.m. to 11 p.m.)

Mlynec: Situated on the river Vltava, Mlynec enables you to see the adjacent Charles Bridge from an unusual perspective. This Zatisi Group restaurant specializes in Czech cuisine; apart from its delicious menu, you can also "taste" a bit of the best contemporary Czech design represented by Rony Plesl's glass objects and original chandeliers. (Novotneho lavka 199/9, Prague 110 00; 420 277 000 777; open Monday to Sunday, noon to 3 p.m. and 5:30 p.m. to 11 p.m.)

A basic lunch can be had for about 50 to 70 crowns, not including drinks. Most restaurants accept credit cards, but don't include the tip on it, or it will likely go to the owner. It's best to tip in cash, 10 percent to 15 percent of the check. It's perfectly fine (and appreciated) to tip in U.S. dollars or euros.

For an elegant dining experience, the riverside Bellevue Restaurant is well known for its superb cuisine and views of the Charles Bridge and Prague Castle. Sundays, there's live jazz and a Champagne brunch. The restaurant, open noon to 3 p.m. and 5:30 p.m. to 11 p.m., is located in Old Town at Smetanovo Nab.18. Among many other selections, Bellevue features a "Best of Bohemia" multi-course meal, served with optional wines.

Old Town Square and its environs are filled with festive, outdoor cafes and restaurants. Many have menus with photographs that make it easy to order. For lovers of Art Nouveau, lunch in the Kavarna Obecni dum -- the restaurant in the Municipal House, the city's most prominent Nouveau building -- is worth a stop. Lunch is served in an elegant, beautifully appointed room with lofty ceilings, huge windows and period crystal chandeliers. It's open daily, at Namesti Republiky 5, from 7:30 a.m. to 11 p.m. for cafe fare.

Czechs love beer -- in fact, there are tours built around pub crawls. Prague has a number of notable brew pubs, including two in New Town: U Fleku, a European-style beer hall and micro-brewery at Kremencova 11, and Novomestsky Pivovar, a pub-style restaurant and micro-brewery at Vodickova 20. U Fleku, open daily from 9 a.m. to 11 p.m., has a house specialty that includes one-quarter of a duck, half a sausage and fillet of pork shoulder. Novomestsky Pivovar is known for its goulash, pork knuckle and roast goose. It opens at 10 a.m. on weekdays, 11:30 a.m. on Saturdays and at noon on Sundays.

Or, stop by for a drink at the old-time Golden Tiger pub on Husova Street, the Old Town venue long popular with the city's intelligentsia. It's open from 3 p.m. to 11 p.m.

Prague Castle: This hilltop fortress on the west side of the Vltava River has loomed over the city since the ninth century. The complex has been reconstructed four times, and still serves as the seat of the presidency. (His flag is flown when he is in the country.) The grounds have four courtyards, a royal palace, several museums and the Gothic St. Vitus Cathedral, started in 1344 and the location for many coronations of kings and queens. There is a changing of the guard each hour, as well as a formal ceremony at noon, all with much ado.

Charles Bridge: Locals will tell you that this walkway, which links Lesser Town (the castle side) with Old Town, is the focal point of the city. A walk down from Prague Castle to Wenceslas Square in New Town (passing over the bridge and through Old Town Square) will take just 30 minutes.

The bridge, with its commanding 31 statues of saints, has been Prague's lifeline for centuries, and gets heavy use every day. Armies, monarchs and everyday folks have all trooped across since it was completed in the early 1400's. Named for famed Bohemian emperor Charles IV, Charles Bridge has two towers worth climbing, even if only for the photo opportunities. (See Old Town Hall below for an easier climb.)

Old Town: Anchored by Old Town Square, this section of Prague is known for its medieval and Renaissance buildings. Every hour on the hour, crowds gather in front of the Astronomical Clock on Old Town Square. Installed in 1410, it chimes daily on the hour between 9 a.m. and 9 p.m. in an entrancing manner: Two cuckoo clock windows open, and statues of the 12 Apostles parade past, while the Grim Reaper rings his bell. Anyone not on an organized tour should visit the Tourism Office a few feet to the left of the clock for maps, tickets, and information on the city's many offerings.

Town Hall: One of the best views of Prague is from the top of Town Hall. Right alongside the clock you can climb the tower or take the elevator, and walk in a circle around the top to get sweeping panoramic views of the city in all directions.

Jewish Quarter: Also known as Josefov (Joseph's City), the neighborhood dates back to the 13th century, though Jews settled here as early as the 10th century. The section represents one of the most well-preserved complexes of Jewish historical monuments in Europe, and a ticket to the Jewish Museum will give you entry to most of the buildings. The original ghetto, once walled in, has six synagogues (including the world famous Old-New Synagogue), a town hall and the second-oldest Jewish cemetery in Europe. The graveyard is no longer visible from the outside because it has been incorporated into the museum, the medieval wall cordoning off this section of the city is long gone, and chic galleries and boutiques now line the once-narrow alleys. Most of the original Jewish quarter was demolished after 1893 to make way for a redevelopment project, but the newer neo-Renaissance buildings are testimony to Prague's Jewish culture.

Wenceslas Square: Once lined with small theatre companies, the long rectangular gathering place has become flashy and commercial with high-end chains in the last decade. (The lovelier historic part of the city is around Old Town Square). That said, a peek at Wenceslas Square is a must because it was the scene of the Velvet Revolution of 1989, which led to the end of Communist rule.

Charles Bridge Museum is at street level on Krizovnicke Square, next to St. Francis' church. You can see the foundations of the original Judith Bridge and exhibits on the various areas of construction and medieval daily life. If you buy a ticket to a boat sightseeing tour with Prague Venice, you also get a free entry to the Charles Bridge Museum. (Open daily, 10 a.m. to 6 p.m.)

Two of the most popular museums for tourists are the National Gallery and the Jewish Museum. The National Gallery -- a huge post-Renaissance structure situated at one end of Wenceslas Square -- has many sections, each dedicated to a different period (open Tuesday through Sunday, 10 a.m. to 6 p.m.). The Jewish Museum, just north of Old Town Square, has collections of artifacts that were brought to Prague from synagogues demolished during the Nazi era, and incorporates the Jewish cemetery. Plan to spend several hours here because the complex includes multiple buildings, among them the Spanish, Maisel and Old New Synagogues. (Open Sunday through Friday, closed Jewish holidays; 9 a.m. to 4:30 p.m. in winter; 9 a.m. to 6 p.m. in summer.)

The Kampa Museum of Modern Art, located in the historic Sova Mill on the river not far from Charles Bridge, has Central European art and provides views of Kampa Park. (Open daily, 10 a.m. to 6 p.m.)

Literary buffs may want to seek out the Franz Kafka Museum, also near Charles Bridge. (Open daily, 10 a.m. to 6 p.m.)

Music and Theater: Prague thrives on classical music, and concerts are easy to come by, either by ordering tickets online before a trip, or purchasing them from the tourist bureau next to the Astronomical Clock at Old Town Square, or at hotels. St. Nicholas Church, the Municipal Hall and the Klementinium -- all located within a few blocks from Old Town Square -- are among the most popular venues.

The Prague Castle Ensemble performs a daily program at Lobkowicz Castle, with selections from Bach, Mozart, Vivaldi, Beethoven and Dvorak, among others. Combo tickets for the concert, a tour of the castle and lunch are available. Lobkowicz is the country's only private castle, with unique appeal to music fans. Once part of the National Museum, it has original musical scores composed and annotated by Beethoven and Hayden as well as many instruments.

At the State Opera you can view performances with English subtitles.

For jazz devotees, a popular evening cruise called Jazzboat boards at 8 p.m. and leaves at 8:30 p.m. from Gate 2, Cechuv Bridge, for a sail that includes dinner.

Christmas Markets: Prague is the center for Christmas Markets in the Czech Republic. In late fall, residents and tourists begin to celebrate the season at Old Town Square (where a large Christmas tree is lit the last Saturday of November), Wenceslas Square, Republic Square, Peace Square and the Holesovice Exhibition Grounds. There's a glittering atmosphere, along with many holiday gastronomic specialties. You'll find plenty of outdoor stalls selling Christmas decorations and ornaments, candles, candy, gingerbread and small gifts. (Note: Many have heaters to keep customers warm.) Nativity scenes and creches are set up in almost all places where the markets are held, as well as in all Catholic churches (without the baby Jesus until 25 December). There are also special Christmas exhibitions of carved creches and decorations in Jindrisska Tower or next to Bethlehem Chapel.