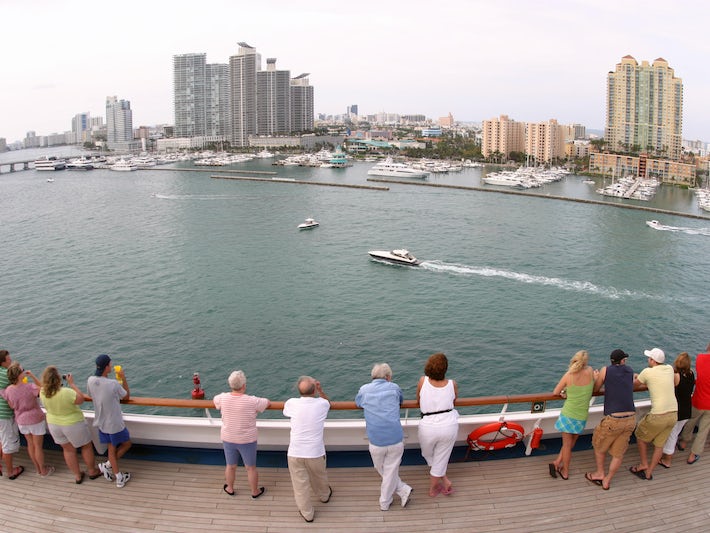 Popular Things to Do in Miami

The City of Miami, in Southern Florida, is everything you've seen in the movies and much, much more. Home to just under half a million people, this lively cruise homeport is sunny and bright and full of life and culture. You can book excursions to check out the stunning Art Deco architecture along Collins Avenue in South Beach, get a taste for Cuban culture in Little Havana or visit some truly amazing museums and galleries. If none of that appeals (or you've already seen and done it all), there's always the beach, which is surprisingly beautiful for a largely urban area -- try a scenic boat ride on the bay or splurge on some fun water sports excursions. Cruisers spending an extra night or two in town can live it up at any number of dazzling high-end clubs, bars and restaurants.

Miami is hot and humid nearly year-round, with a brief respite during the early winter months. Currency is the U.S. dollar. English is spoken everywhere, but thanks to a large Cuban and Latin American population, Spanish is prevalent as well.

Find Things to Do in Miami on Viator

Food and Drink in Miami

For a great dining experience that's chic-with-a-view, ask for a table on the outdoor patio at La Marea at The Tides (1220 Ocean Avenue).

Also consider Versailles (3555 SW 8th St., Miami) right in the heart of Little Havana. Authentic, but ask for the English menu if you don't want to navigate the Spanish one. Try picadillo or ropa vieja at reasonable prices.

Best Beach for a Half-Day Visit: Miami's South Beach, about a 20-minute cab ride from the port.

Best Beach for the Dedicated Beach Bum: The beach at Bill Baggs Cape Florida State Recreation Area (1200 S. Crandon Boulevard), on Key Biscayne where you can find everything from kayak rentals to food stalls.

Explore Miami history via the neighborhoods of Coral Gables and Coconut Grove (renting a car is advised). Coral Gables was developed in the 1920s and is best known as home to the Biltmore Hotel, noted for its resemblance to Seville's Giralda Tower); its Miracle Mile (Douglas Road/37th Avenue to LeJeune Road/42nd Avenue) has a mixture of fashionable boutiques and eateries. Bring a swimsuit and head to the Venetian Pool (2701 De Soto Blvd), a fantasy-themed public pool created out of a rock quarry.

Coconut Grove is Miami's oldest section with construction beginning in the 1870s. It's also a place of fashionable boutiques and restaurants. Worth a detour: Vizcaya Museum and Gardens (3251 S. Miami Avenue), an early 20th-century Renaissance style -- and quite grandiose -- estate built for a Chicago industrialist who wanted to recreate a 16th-century Italian estate.

Little Havana is the famous 3 1/2-square-mile site where many Cubans fled to after escaping their country. "Calle Ocho" or 8th Street is the main drag and central point (particularly between 11th and 17th Avenues) and it's best as a walking-around destination. Diversions include watching cigars being rolled at the El Credito Cigar Factory (1106 Southwest 8th Street) and visiting the Cuban Museum of the Americas (1300 SW 12th Avenue).

Serenity-seekers should head to the Fairchild Tropical Botanic Garden (10901 Old Cutler Road) where a mix of man-made lakes winds around one of the world's largest palm tree collections -- not to mention verdant examples of flora and fauna.