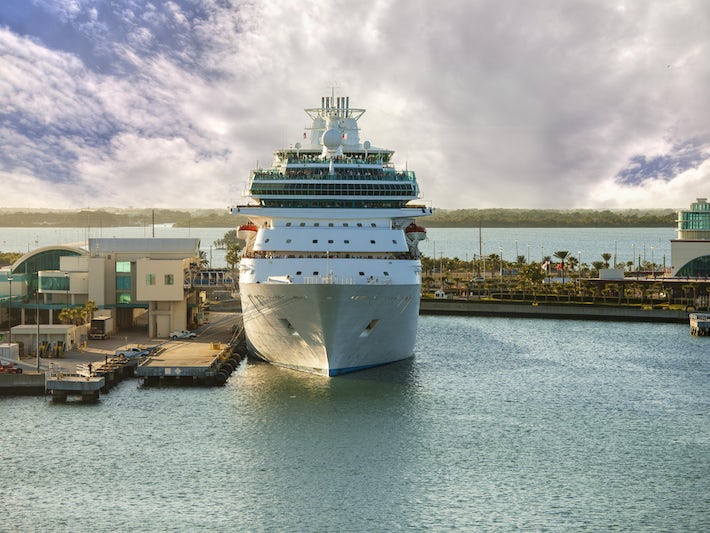 Popular Things to Do in Port Canaveral (Orlando)

If your cruise sets sail from Port Canaveral near Orlando, Florida, you'll be just one hour from Walt Disney World, SeaWorld and Universal Studios -- but there's much more to see and do than the parks. Cruisers can take shore excursions out to the Kennedy Space Center and nearby beaches where dolphins, manatees and turtles swim the waters. Hosted excursions are a good idea; bundling entrance fees and transportation can be cost-effective. Be sure to check if a rocket launch is scheduled during your stay.

Despite the heat, the busiest times for tourism in Orlando is summer -- but also over the winter holidays since the area is home to so many kid-friendly attractions. Weather during the winter months is the most ideal. English is the official language in Orlando, and the U.S. dollar is the currency.

Find Things to Do in Port Canaveral (Orlando) on Viator

Along A1A, near the port, are a number of typical chain restaurants for a quick lunch or snack. But, what people look for when dining in the Port Canaveral area is fresh seafood.

At Cocoa Beach: Coconuts on the Beach (2 Minutemen Causeway, Cocoa Beach; 321-784-1422) is famous for its parties, award-winning clam chowder and fresh Florida seafood caught by the local fishing fleet. Coconuts offers shuttle service from the port to Coconuts at the Beach, and daytrip packages, which include beach access and food, are available. Or, try Atlantic Ocean Grill on the pier (401 Meade Avenue, Cocoa Beach; 321-783-7549) and Oh Shucks Raw Bar (321-783-7549) -- ocean seafood and terrific views are house specialties.

For Shrimp Lovers: Dixie Crossroads Seafood Restaurant (1475 Garden Street, Titusville; 321-268-5000) is famous for its shrimp and has been serving all types of seafood since 1983.

Orlando has some 5,300 restaurants, ranging from chain restaurants to fine-dining establishments. Here are some choices, including fast food for a quick bite and table-service restaurants for when you want a more leisurely, relaxed meal:

Lunching at the parks: At Walt Disney World's Magic Kingdom, Pinocchio's Village Haus in the Fantasyland section of the park, is convenient to such attractions as It's A Small World, Cinderella's Carousel and Dumbo and offers burgers, fries, sandwiches and such. Prices are less than $15 per person. For table service, Tony's Town Square Restaurant serves Italian fare -- the chicken parmesan is delicious. It's open for lunch between 11:30 a.m. and 2:45 p.m. and is also open for dinner. Prices range from $15 to $29.99.

At Epcot, a good spot for a quick lunch is the Lotus Blossom Cafe (11 a.m. to 9:30 p.m.), in the China pavilion; try the egg rolls and beef rice bowl. We also love the Nine Dragons Restaurant (noon to 9 p.m.) for Chinese gourmet fare, including peppery shrimp with spinach noodles, vegetarian stir-fry and strawberry red bean ice cream.

In Downtown Disney's Marketplace, options include the Rainforest Cafe and Fulton's Crab House, located in a replica of a 1900's riverboat. Quicker and less expensive choices include Earl of Sandwich, an outlet of the national chain, and McDonald's, next to the LEGO Center. Other places in the Westside area include Bongo's Cuban Cafe, co-owned by singer Gloria Estefan, offering authentic Cuban cuisine; Wolfgang Puck Cafe, with an outdoor dining area and indoor seating; and Planet Hollywood, with movie memorabilia.

Lunching in downtown Orlando: If you are visiting the Orange County Regional History Center, Lake Eola or other attractions in downtown Orlando, try Tijuana Flats, which features Tex-Mex specialties like fresh salads, quesadillas and tacos. Entrees are less than $10.

Any drink that includes orange juice (mimosas and screwdrivers are popular choices) is a sure winner, as Central Florida has numerous orange groves for an abundance of fresh fruit and juice. Or, perhaps, try a beverage that's a bit more exotic like a "Burnt Orange" (brulee orange muddled with agave nectar, Don Julio Tequila, Anejo Tequila, Grand Marnier, orange juice and flaming orange). It's one of the signature cocktails ($13) at Todd English's bluezoo, a trendy restaurant and bar at the Walt Disney World Swan & Dolphin Resort.

With 72 miles of Atlantic shore, the Port Canaveral area boasts some of the state's most spectacular beaches. From Port Canaveral, south to Sebastian Inlet State Park, are more than 35 miles of public beaches. Just about any eastward turn off of State Road A1A will provide access to the beach, but beach parks offer restrooms, showers and picnic pavilions. Jetty Park, at the east end of Port Canaveral, has year-round lifeguards, beach wheelchairs, a snack bar, a bait-and-tackle shop and a 1,000-foot-long fishing pier. Several side streets in Cocoa Beach have metered parking and dune crossovers to the beach.

Best for Seclusion: Canaveral National Seashore stretches for 23 miles and is completely undeveloped. There are even great views of the space shuttle launch pads.

Orlando Theme Parks! If your ship is in port for at least 8 to 10 hours (or if you're overnighting), one of the major appeals of Port Canaveral's location is its proximity to Orlando. See below for must-visit attractions in Orlando.

Near Port Canaveral, you'll find Merritt Island and the Canaveral National Seashore and Merritt Island National Wildlife Refuge. The NASA-owned refuge is home to more endangered species -- such as the Western Indian manatee, Southern bald eagle and Atlantic loggerhead turtle -- than any other refuge in the United States. Visitors can take advantage of a seven-mile auto tour route along Black Point Drive, four hiking trails ranging from 1/4 mile to 5 miles in length, a manatee observation deck and boating and canoeing.

Also on Merritt Island is the Kennedy Space Center (open daily from 9 a.m. to 5:30 p.m.). There are more than enough attractions to fill a full day, but the highlights can be done in half a day if time is short. The maximum access pass allows admission for two consecutive days and also includes admission to the U.S. Astronaut Hall of Fame; its realistic astronaut training simulators allow guests to feel the pressure of four times the force of gravity, take a virtual moonwalk and ride a rover across Mars.

Astronaut Encounter, the center's meet-and-greet program, is held several times daily. The program consists of Q&A sessions, mission briefings and personal stories of space travel, as told by those who have flown in space.

About a half-mile hike south is the Ron Jon Surf Shop (Cocoa Beach at the intersection of Highway 520 and A1A); it's a fantastic destination for more than just surf gear -- check out bathing suits, casual wear, sunglasses, sandals, flip-flops and even home accessories. Open 24 hours, the store is massive -- spread out over a half-million feet on two floors.

The American Police Hall of Fame & Museum (6350 Horizon Drive, Titusville; 321-264-0911) is just west of the gates to the Kennedy Space Center and across from the Astronaut Hall of Fame. Daily, from 10 a.m. to 6 p.m., you can sit in an electric chair or check out crime scenes and exhibits of infamous crimes throughout history. Children can take a peek at the Robocop and police uniform dress-up area, visit a badge-making station and sit on a real police motorcycle.

Established in the 1800's in the center of the famed Indian River citrus region, historic Cocoa Village offers a taste of old Florida. Many of the buildings, including the 1924 Cocoa Village Playhouse, are listed in the National Register of Historic Places; the 1885 S. F. Travis Hardware Store is actually the oldest business on the Atlantic Coast -- from Jacksonville to Key West -- and is still operated by the original family. A variety of boutiques and shops lines the streets of the five-block district. Note: Cocoa Village is not located in Cocoa Beach.

First-timers to Orlando, who have the opportunity to visit only one park, should go to Magic Kingdom at Walt Disney World. The park that started it all back in 1971, Magic Kingdom is the flagship of the 30,000-acre Walt Disney World property. It is divided into seven sections with attractions for all ages: Main Street U.S.A., Adventureland, Frontierland, Liberty Square, Mickey's Toontown Fair, Fantasyland and Tomorrowland. For more information on Magic Kingdom, visit FamilyVacationCritic.com/magic-kingdom-family-vacation/dfv/.

If you've got more time on your hands there are lots more parks to check out including Epcot, which offers visitors a trip around the world and a glimpse of the future. Disney's Hollywood Studios, a working studio and theme park rolled into one, is the place for movie buffs. At Disney's Animal Kingdom visitors can go on an "African safari" to see real lions, giraffes, zebras, elephants and other exotic animals roaming free in a savannah.

Universal Orlando is the place where films and television shows such as "Spider-Man," "Shrek," "The Incredible Hulk" and "The Simpsons" come to life in rides and attractions. Universal Orlando has two parks, Universal Studios and Islands of Adventure.

Even though Orlando is not on the coast, there is water, water, everywhere -- in a variety of aquatic parks. Visitors can swim with dolphins or stingrays, snorkel to see tropical fish and feed exotic birds in an aviary at Discovery Cove.

Other water parks with slides, lazy rivers, wave pools, kid's water fun areas and rides include Blizzard Beach (themed like a ski resort, where the snow has melted and left pools, and including such attractions as a "ski-lift") and Typhoon Lagoon (where the theme is what has remained after a storm has blown over), both on Disney property; and Universal Orlando's Wet 'N Wild, where The Storm thrill ride invites the daring to drop from a chute into a spinning bowl and where other attractions include multipassenger tube rides.

The Charles Hosmer Morse Museum of American Art in Winter Park is a short drive from downtown Orlando. It features a large collection of Louis Comfort Tiffany glass. The collection includes stained-glass windows, the famous Tiffany lamps, vases, jewelry and other objects. A highlight is the Tiffany Chapel, in Byzantine style, which includes stained-glass windows, a baptismal font, altar, tabernacle, and a glass mosaic behind the altar.

Gatorland is a 110-acre park where you can see alligators and crocodiles galore, plus birds and other animals. Shows include alligator-wrestling and reptilian spectacles. You can see the park's collection of giant white alligators -- yes, white! -- and pet a baby alligator. (Relax, they tape its mouth.) If it's hot, there is a Splash Water Park to cool off.

At the Richard Petty Driving Experience at the Walt Disney World Speedway, visitors don flame-retardant suits and helmets and board a racecar with a 600-horsepower engine to spin around the track at white-knuckle speeds. There are several options -- including the Ride-Along, which involves riding shotgun in a two-seat NASCAR-style stock car that's driven by a professional racecar driver for a three-lap Qualifying Run at high speeds. Another option, the Rookie Experience, puts visitors in the driver's seat for eight laps around the track.

Florida EcoSafaris at Forever Florida is a 4,700-acre ranch, with zip-lining over the canopy of cypresses and other trees of a natural forest at heights of up to 55 feet (about the equivalent of a five-story building).

History buffs may wish to check out the Orange County Regional History Center in downtown Orlando. The museum is housed in a historic courthouse, dating from 1927, and has three floors of permanent exhibits chronicling the region's history. It also hosts visiting exhibitions.

Adventure seekers take note: Hot-air balloon rides usually begin at dawn, and flights take visitors over the Magic Kingdom or other areas, depending on the prevailing winds -- ours took us over fragrant orange groves and swamps, and our pilot took our basket down so low to the swamp we actually heard the gators growl! Among the companies that offer hot-air ballooning are Bob's Balloon Flights and Orlando Balloon Rides.