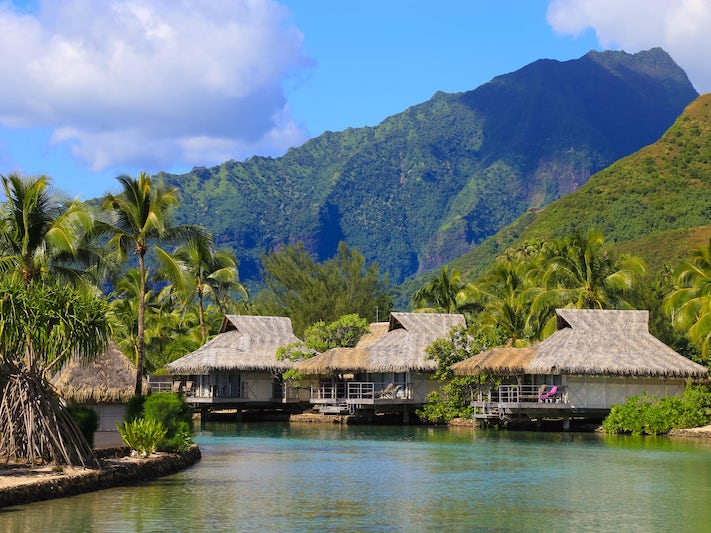 Popular Things to Do in Moorea

The stunning natural beauty of Moorea, a small island located in French Polynesia, makes it a top destination for cruise travelers and even other Tahitians looking for unspoiled rest and relaxation. The island is covered in mountains, verdant forests and breathtaking lagoons perfect for climbing, hiking, swimming, snorkeling and diving excursions. This remote island doesn't have public transportation and private transfers are pricy, so shore excursions are often a good option for getting around. If you're not looking to exert yourself, book a beach break and simply enjoy the otherworldly scenery.

Peak travel season in Moorea is from May through October, since the island is typically less rainy during this time; temperatures are fairly consistent year-round. Moorea has two official languages -- French and Tahitian -- and though some locals might know a bit of English, it's not terribly common. Currency is the French Polynesian franc.

Find Things to Do in Moorea on Viator

Food and Drink in Moorea

As in most of French Polynesia, fresh fish is excellent on Moorea. If you are a seafood eater, don't miss out. A Tahitian specialty is poisson cru, tuna marinated in lime juice and coconut milk. End any meal on a sweet note; Polynesian desserts generally include fresh fruit or a dish with vanilla or coconut or both.

Moz Cafe (689-40-56-38-12) in the township of Maharepa (to the east of Cook's Bay) serves burgers, salads, sandwiches, sashimi and the crowd-pleasing French toast in air-conditioned comfort. No credit cards, so bring francs. It closes at 3pm.

Lilikoi Garden Cafe (689-87-29-61-41) is basically a food truck set up in a lovely garden, owned by Laurence Anzai, a French woman who settled in Moorea with her family some 14 years ago. The garden cafe, located 200 metres from the Hilton Resort just to the east of Opunohu Bay, is open for lunch only, closing at 2.30pm. French tuna, curries, fish sandwiches and salad -- with vegan and vegetarian specialties -- are on the menu. She also owns the Lilikoi Deli in Maharepa and runs six-hour food tours of Moorea island that offer tastings of exotic foods, a cooking class and lunch. The tours leave at 8.30 a.m from the deli.

Te Honu Iti (689-40-56-19-84) is sometimes called Chez Roger due to the owner who's been cooking there for a couple of decades. Situated right on Cook's Bay with great views of the jagged mountains, the restaurant doesn't look much from the road, but the food and location make up for it. Fresh fish, mahi-mahi and prawn ravioli, tuna carpaccio and lobster are favorites, while diners rave about the apple pie and the bananas flambe. Ring to check as the restaurant may be closed on Wednesdays. It's located at PK9 counterclockwise, meaning it is 9 km (5.5 miles) from the west from the airport at Temare, from where all distances begin.

Best for half-day visit: The beach at the Sofitel Moorea la Ora Beach Hotel Resort has a great view across to Tahiti and is a good place to while away the afternoon. The resort is located at PK 1 counter-clockwise on the coastal road, or just 1 km from the airport to the west.

Best for families and activities: Ta'ahiamanu Beach, which may also be known as Opunohu Bay, is about 300 metres long and popular with local families and picnickers. There are catamarans for hire and kids playing soccer on the beach. It's about one mile (1.6 km) west of the Hilton Resort, at PK 27 counter-clockwise on the coastal road.

Le Petit Village: This is the island's cluster of tourist shops and artsy boutiques. Situated at the north-west corner of the island, you'll find everything from Tahitian vanilla beans and black pearls to beach clothing, especially pareos. (Located at PK 27, counter-clockwise, no phone).

Belvedere Lookout: For an on-land vista of Moorea, the place to be is the Belvedere up on the island's high, but easily accessible, hill. This vantage point offers stunning views of Cook's Bay, Opunohu Bay and Mount Rotui. Pair the breathtaking view with a short hike off Belvedere Road to view three ancient marae sites -- the trail is well marked -- and that's a great way to spend a port day. Several different hikes as well as guided tours of vanilla and coffee plantations are offered by students at Opunohu Agricultural College at Belvedere. Most ship tours of the island will visit Belvedere Lookout, and it's well worth seeing. If travelling independently, the best time to visit is early in the day before the rain and mist set in. Take a turn off the coastal road at PK 18 counter-clockwise and head inland a few kilometres. The lookout is open all hours.

Tiki Village Theatre : If you're new to Polynesian culture or have time to attend an evening Polynesian dance spectacular, this attraction will satisfy your curiosity and immerse you in island culture. Craftspeople live and work here, carving wood, making flower garlands, and dyeing pareos. There's also a model pearl farm. (PK 30 counter-clockwise; 689-40-55-02-50; open Tuesday to Saturday, 11am to 3pm, with dances on Tuesday and Friday nights from 6pm).

Motu Picnic: Take a motorboat trip to a secluded motu (island) for a barbecue lunch to enjoy salads, barbecued chicken, fish and fruits and a possible swim with stingrays. Moorea's best beaches are those at the private resorts on the surrounding offshore islands. If your ship doesn't offer this excursion, try water-based tour operator Moorea Mahana Tours. (689-56-20-44).