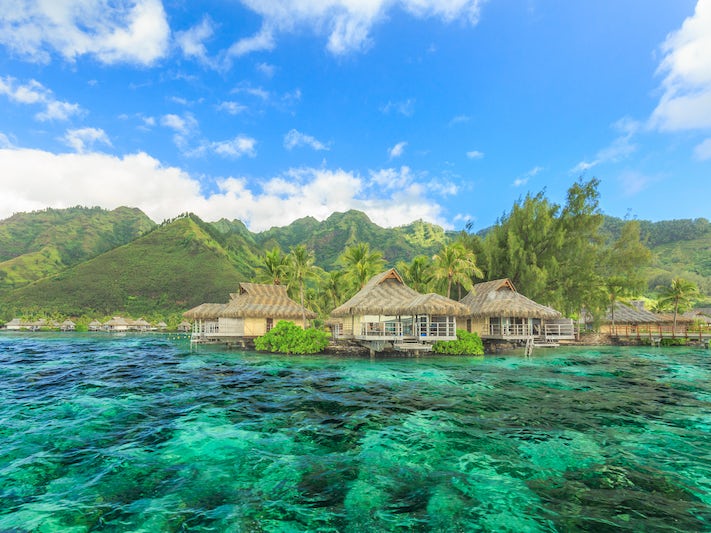 Popular Things to Do in Tahiti (Papeete)

Tahiti is the largest and most populated island of the Polynesian islands, but it's still considered a rather exotic and luxurious cruise destination. Tahiti Nui is the liveliest area of the island -- there are excellent beaches for water sports, lots of shops and plenty of restaurants. Cruisers who want to escape that hustle and bustle can take an excursion out to Tahiti Iti to lounge on its uncrowded beaches, see the local villages and perhaps visit its archaeological sites where there are petroglyphs, ancient temples and caves.

Peak travel season in Tahiti is from May through October, since the island is typically less rainy during this time. Temperatures are fairly consistent year-round. Tahiti has two official languages -- French and Tahitian -- though locals working in tourist areas might also know some English. Currency is the French Polynesian franc.

Find Things to Do in Tahiti (Papeete) on Viator

Food and Drink in Tahiti (Papeete)

Tahitian cuisine is a delightful fusion of the French and Polynesian cultures. Restaurants in Papeete and beyond feature market-fresh fish, exotic Polynesian fruits and French breads and pastries. Perch, mahi mahi and tuna are often eaten raw, even at breakfast. You'll find poisson cru -- raw tuna marinated in lime juice and coconut milk -- on most resort buffets. French-Polynesian desserts are infused with island-grown vanilla and artfully styled with fresh papaya, pineapple, mango and coconut shavings.

Look for stands selling French pastries, bunches of mini-bananas, sandwiches and rice plates (with chicken or fish) in the marche (market). The prices can't be beaten, and it's a genuine local experience. If you are in town in the evening, don't miss the roulottes, or food carts/caravans, which set up on the waterfront street-fair style; hot, fresh crepes are a must.

Notable Papeete restaurants include Le Retro, a Parisian-style sidewalk cafe on the waterfront in the Vaima Centre, with good seafood and people-watching (40-42-86-83) Le Perchoir by Les Reves de Lucie also in the Vaima Centre is a favourite for coffee and French pastries (89-54-58-88) . For a romantic dinner splurge or a lunch with amazing views, try the InterContinental resort's Le Lotus Restaurant in an open-air, thatch-roofed dining room built over the lagoon at the resort in Faa'a, a few kilometres to the west of Papeete (40-86-51-10).

Be sure to order an ice-cold Hinano beer at your first opportunity. This bitter, golden lager is made right on the island in the Punaruu Valley.

Nearest to Papeete: At the beach at the InterContinental Tahiti in Faa'a, near the airport, you can rent kayaks, jet skis and snorkeling gear from water sports operators or take a guided tour. When you get hungry you can find a snack or cocktail at one of the resort's upscale restaurants and bars.

Beach as Destination: La Plage Vaiava, locally known as 'PK 18 beach' because of its location on the west coast road, is one of the island's largest white sand beaches (most are black sand or rocky). Located near Mahana Park (which is between the townships of Punaauia and Paea), this beach is popular for swimming or snorkeling with the colorful tropical fish in the coral reef. You can rent water sports gear here. The small parking lot gets crowded by the afternoon, so arrive early -- especially on Sundays.

Marche de Papeete: For local color, nothing beats the Marche de Papeete, Tahiti's main marketplace (located a block behind the waterfront). You can buy everything from flowers to fruit and fish, to crafts and gifts as well as snacks. (Corner of Rue Colette and Rue de 22 Septembre, Papeete; 40-43-67-15; open daily, Mondays 5 a.m. to 6 p.m., Tuesday to Saturday 4 a.m. to 6 p.m., Sundays 3 a.m. to 9 a.m.)

Museum of Tahiti and Her Islands: The Musee de Tahiti et des Iles (Museum of Tahiti and Her Islands) near Le Meridien Tahiti, is located on an area that was once a sacred religious site, known as a marae located in Punaauia, an area to the west of Papeete and considered part of the city's suburbs. The museum has displays about Polynesian history and exhibits of artefacts. The entrance fee is around 600 CFP (USD\$5.50) for permanent exhibits only, and a couple of hundred francs more if you also want to see the temporary exhibits. (PK 15, anti-clockwise, Punaauia; 40-54-84-35; open Tuesday to Sunday, 9 a.m. to 5 p.m.)

Cathedral of Notre Dame de Papeete: See beautiful stained glass and Polynesian symbols of culture in this Catholic cathedral, in the heart of the city, which was consecrated in 1875 and restored in 2005. (Avenue du Marechal Foch at Rue Jeanne d'Arc, Papeete.)

Tahiti Iti; The smaller section of the island is connected to the main island by an isthmus at the town of Taravao. It is lush, mountainous and verdant and a good option for a day's driving trip,. (Taravao is located at PK 54 clockwise.)

Temple Protestant de Paofai: A 10-minute walk from Papeete's Notre Dame Cathedral, the Protestant Church of Paofai, built in 1873, offers a different architectural style and is painted a light shade of pink. Women wear beautiful hats to Sunday morning services where the harmonised singing is beautiful to hear. (Boulevard Pomare, across the street from Jardins de Paofai, Papeete.)

Cascades de Faarumai: A short walk through a lush forest of bamboo, mape (Tahitian chestnut) trees and ferns leads to the first of three waterfalls in the Faarumai Valley near Papeno'o on Tahiti's north-east coast. Stand at the base of the 80-metre Vaimahuta waterfall to feel the warm mist on your face. The site is also known as The Three Waterfalls. (Between Papeno'o at PK 18 and Tiarei at PK 25 clockwise.)

The Wrecks: In Faa'a near the airport you can dive 'The Wrecks' and see colorful fish swim alongside a long-sunk 16-foot Cessna airplane and two boats. Just south near Paea are two more dive site wrecks: an airplane and an old schooner. (PK 5, Faa'a and PK 22, Paea anti-clockwise.)

Island of Moorea: If your ship isn't calling at Moorea, then pop over on the ferry to take a look. It's only a 30-minute ride away from Tahiti and a world apart. Snorkeling in the encircling lagoon makes for a delightful day trip. The Papeete ferry terminal is adjacent to the cruise terminal downtown. (Boulevard Pomare at Avenue du Chef Vairaatoa, Papeete.)

Olivier Breaud International Golf Course: This course is set in the Atimaono complex, once a sugarcane plantation with a rum factory attached. It welcomes players for the annual Tahiti International Open on the PGA circuit. (PK 35, Papara, anti-clockwise.)