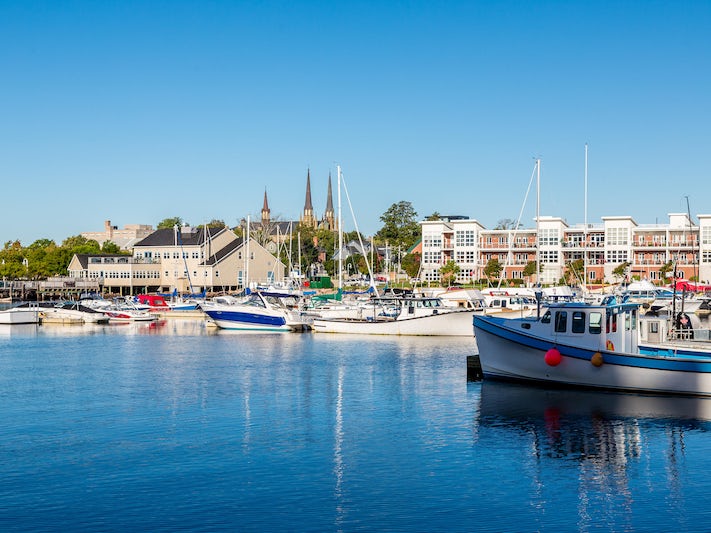 Find Things to Do in Charlottetown (Prince Edward Island) on Viator

Popular Things to Do in Charlottetown (Prince Edward Island)

Because of its proximity to the ocean, Prince Edward Island is a great place to find fresh seafood dishes. Clams, mussels and lobster are popular; you'll never go wrong with local beer or ice cream, either, and you'll find both in spades. The island has a clear Scottish influence, as well, so you can enjoy everything from classic fish 'n' chips to delicious shortbread.

Olde Dublin Pub: Located above the Claddagh Oyster House, you'll find this Irish pub, which offers everything from fish and chips to pasta, burgers and quesadillas, as well as seafood items at reasonable prices. (131 Sydney Street; 902-892-6992; open Monday to Saturday from 11 a.m.)

The Gahan House Pub and Brewery: This upscale brewpub is located in a historic townhouse that serves fish and chips in brown bags. While you're there, sample some of their handcrafted ales, or take a brewery tour. (126 Sydney Street; 902-626-2337; open from 11:30 a.m.)

Fishbones Oyster Bar: This establishment features a raw bar with an array of island oysters and specialty sauces. (136 Richmond Street; 902-628-6569; open from 11 a.m.)

Lucy Maud Dining Room: This restaurant overlooks the entrance to the harbor. It's operated by students from the Culinary Institute of Canada under the guidance of world-class chef instructors. Try the PEI Mussel Linguine. (4 Sydney Street; 902-894-6868; open Tuesday to Friday, 11:30 a.m. to 1 p.m. between October 15 and May 14)

Dalvay by the Sea: Inside PEI National Park is a National Historic Site called Dalvay By The Sea. The elegant Victorian home was built by a Scottish-American oil tycoon, and now the property is run as a boutique hotel and restaurant. They use fresh local ingredients in such menu items as Island blue mussels and lobster croissant. (16 Cottage Crescent, Dalvay; 888-366-2955; open for afternoon tea; advance reservations required)

COWS Creamery: If you'd rather have a sweet treat than a full meal, head to COWS creamery, where you can try some delicious ice cream or cow chips (chocolate-covered potato chips) from a company that got its start on Prince Edward Island. (150 Queen Street; 902-892-6969; call for hours) You can also tour the company's headquarters to see how the ice cream is made and follow it up with some samples. (397 Capital Drive; 902-370-3155; tours daily, every half hour starting at 10 a.m., June through September)

In "Anne of Green Gables," Anne accidentally gives a friend some wine instead of the intended raspberry cordial. As such, the drink is kind of a big deal on the island. It's really just raspberry soda, but it's tasty, and you can find it at several stores in downtown Charlottetown, as well as in Avonlea Village and at Green Gables.

If you're seeking an adult beverage instead, try a Gahan ale. You can find it throughout the island or at The Gahan House, where brewery tours are also offered (126 Sydney Street; 902-626-2337).

It's said that no matter where you are on the island, you're never more than 15 minutes away from a beach. The island has beaches for every purpose, from supervised swimming beaches for families to deserted coastlines for solitary walks or clam digging.

Most Popular Beach: Cavendish beach, part of Prince Edward Island National Park, is staffed by lifeguards and located about 35 minutes from downtown Charlottetown. It's probably the region's busiest beach since the waters of the Northumberland Strait are the warmest sea waters north of the Carolinas. It's also a great place to view the red sandstone cliffs for which PEI is famous. (Toss in the surrounding green grass and blue water, and it's easy to see why it's said the island comprises rubies, emeralds and sapphires.) During the second weekend in July, you can enjoy big names at the Cavendish Music Festival. Past performers include Keith Urban, Taylor Swift, Blake Shelton and Lady Antebellum, among others.

Most Interesting Beach: Basin Head Provincial Park is known for its "singing sands." Nobody's really sure why the phenomenon occurs, but when you walk on the sand, it makes a noise akin to singing. This beach, staffed with lifeguards, can be found about an hour and 15 minutes outside of Charlottetown.

Most Family-Friendly Beach: The campground at Red Point Provincial Park, about an hour and 15 minutes' drive from Charlottetown, offers playground facilities, children's activities and lifeguard supervision.

Founders' Hall: Located in front of the cruise terminal building, it's where visitors can learn about the story of Canada. A multidimensional video and media presentation describes the Charlottetown Conference of 1864 and how it led to the Birthplace of Confederation.

Beaconsfield Historic House: Situated in a cove with a commanding view of Charlottetown harbor, Beaconsfield Historic House was built in 1877 for a wealthy shipbuilder. This grand 25-room house is an enduring symbol of Victorian elegance, but it was also one of the first homes on the island to have running water, gas lights and central heating. It features eight fireplaces, imported chandeliers, plaster moldings and stained glass. (2 Kent Street; 902-368-6603; hours vary seasonally)

Confederation Centre of the Arts: The place where you can catch a performance of "Anne of Green Gables -- The Musical." The curtain was raised in 1964, making it Canada's longest running musical. (Victoria Row and Queen Street; 800-565-0278; 130 Queen Street)

Avonlea Village: Located in the Cavendish area, about 35 minutes outside of Charlottetown, the interactive village (named after Anne of Green Gables' hometown) offers visitors the chance to step back in time to 1908 and relive some pages of Lucy Maud Montgomery's classic novel. Costumed actors guide visitors around miniature houses while kids and adults can dress up in period costumes, enjoy a hay wagon ride, watch puppet shows and taste freshly made sweets from the chocolate factory. (8779, Route #6 Cavendish; 902-963-3050; open 10 a.m. to 5 p.m. daily, June 20 to September 13)

PEI National Park: Miles of sand dunes, beaches, sandstone cliffs and walking trails make up the park, which is also the home of the Green Gables house. Green Gables is the farm that inspired the setting of "Anne of Green Gables." The park is located in Cavendish, about a 35-minute drive from Charlottetown.

Cycle Part of the Confederation Trail: The island's conversion of old railroad tracks to pathways for biking has resulted in close to 300 kilometers of trails through the rural heartland. The best limited-time excursion is at St. Peter's Bay. Drive 25 minutes from Charlottetown, and rent bikes from St. Peter's Bay Craft and Giftware (15465 Northside Road, St. Peters Bay; 902-367-7900).

Golf: The island has more than 30 courses, all within a 45-minute drive of Charlottetown. One of the most well-known is the Links at Crowbush Cove, which was recognized by Golf Digest. It's just a 25-minute drive from Charlottetown. (710 Lakeside Road (Route 350), Lakeside; 800-235-8909)

Driving Tour: Prince Edward Island is eminently suitable for driving tours. The tourism office has them mapped out, and you can mix and match (based on proximity) trips to evocatively named regions, such as "North Cape Coastal Drive," "Green Gables Shore," "Red Sands Shore," "Charlottetown," and "Points East Coastal Drive" -- all taking you through different sections of Prince Edward Island.

The Dunes Studio Gallery: This gallery, about 20 minutes outside of Charlottetown by car, features breathtaking works by local artists and crafters. You'll find unique furniture, clothing, sculptures, glass items, jewelry, woodwork and more -- all for sale. Take your time browsing the collection, which includes an outdoor sculpture garden, before grabbing a bite to eat at the onsite cafe. (3622 Brackley Point Road, Brackley Beach; 902-672-2586; open daily, May to October, from 9 a.m.; call 902-672-1883 for cafe information)