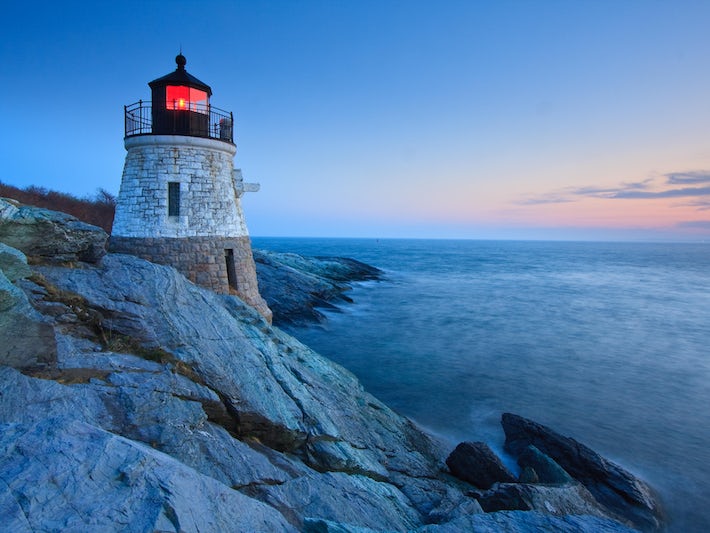 Find Things to Do in Newport on Viator

Popular Things to Do in Newport

Food and Drink in Newport

While touring the mansions, sandwiches and salads in delightful surroundings are offered at the Carriage House and patio at The Elms (11 a.m. to 4 p.m., late May to mid-October) and the Chinese Tea House at The Breakers (open 11 a.m. to 5 p.m. daily, mid-May to late October).

The Newport Mansions: Eleven fabulous Newport mansions are operated by The Preservation Society of Newport County, ranging in age from the 1748 Hunter House, which exhibits Newport-designed colonial furniture, to The Elms, a 1901 French-style chateau with a 10-acre park and beautiful sunken garden.

The Breakers: If you have time for only one property, this 70-room Italian Renaissance-style villa, built by the famous architect Richard Morris Hunt for Cornelius Vanderbilt II, is the most popular. Other popular homes are Marble House, built in 1892 by Hunt for William and Alva Vanderbilt and featuring a dazzling Chinese tea house facing the sea; The Elms, built for a Philadelphia coal merchant; and Rosecliff, a 1901 Stanford White house that was modeled after the Grand Trianon at Versailles and served as the setting for the films Amistad, True Lies and the Great Gatsby. The Elms offers a fascinating specialized tour of servant life that takes you where few visitors go -- up the back stairs to the quarters where the servants slept. Photos and memorabilia bring to life the differences between the upstairs-downstairs lives in the mansion. If you're not taking a ship tour, book house tours online to avoid lines onsite. Other than specialized tours requiring reservations for specific starting times, tickets are for general admission at any time and can be printed at home. Tickets are available from one to five properties; the more you book, the lower the average admission fee. It is a good idea to allow about 30 minutes' walking time between any two mansions. (Mansions open at 10 a.m., The Breakers at 9 a.m., and last tours are at 5 p.m.)

Doris Duke's Rough Point: The best mansion to visit for outstanding and original artwork and furnishings is Doris Duke's Rough Point located near the far end of Bellevue Avenue. The only heir of tobacco billionaire James B. Duke, Doris made her 1930 debut in this house, which was originally built by Frederick Vanderbilt and acquired in 1922 by James Duke. Until her death in 1993, Doris Duke collected paintings by Gainsborough, Van Dyck and Renoir, mid-18th century Louis VI furniture, Belgian tapestries, and Chinese porcelain from before the Ming Dynasty through the 19th century. The house's landscaping is by Frederick Law Olmsted of Central Park fame. (680 Bellevue Avenue; 401-847-8344; guided tours from 10 a.m., last tour at 3:45 p.m. Tuesday to Saturday, mid-May to early November; 10 a.m. to 2 p.m. Thursday to Saturday, mid-April to mid-May)

Whitehorne House: Doris Duke also founded the Newport Restoration Foundation to save and preserve nearly 100 Newport properties dating from the 18th and early 19th centuries, and she was an avid collector of 18th-century Newport and Rhode Island furniture. Her own priceless furniture collection is on display at Whitehorne House, a Federal-style mansion with a splendid formal garden. (416 Thames Street; 401-847-2448; guided tours 10:30 a.m. and 3 p.m. Thursday to Monday; self-guided tours 11 a.m. to 3 p.m. Thursday to Monday)

The Cliff Walk: The famous 3.5-mile Cliff Walk is a must-see, even if you only sample a short stretch. From Thames Street, follow Memorial Boulevard to the beginning (a 15- to 20-minute walk), and turn right along a gentle footpath that hugs the cliffs above the Atlantic Ocean breakers. On good surf days, you'll see surfers off nearby Easton's Beach (First Beach). This path passes in front of the mansions, though some are partially obscured by lines of bushes or fences. The damage to one section of the walk caused by Hurricane Sandy should be completely repaired by 2014.

National Museum of American Illustration: Newport's newest museum features works from the period known as the Golden Age of American illustration, from the 1880s to the 1940s, by Norman Rockwell, Maxfield Parrish, N.C. Wyeth and other major artists. Many of the illustrations chronicle life during this era. The museum is housed in Vernon Court, an 1898 Gilded Age mansion with grounds designed by legendary landscape architect Frederick Law Olmsted. (492 Bellevue Avenue; 401-851-8949; open 11 a.m. to 5 p.m. Thursday to Sunday, Memorial Day to Labor Day; rest of the year, 11 a.m. to 5 p.m. Friday)

The International Tennis Hall of Fame & Museum: Tennis fans should not miss this museum housed in McKim, Meade and White's 1880 National Historic Landmark shingle-style original Newport Casino. It traces the history of the game of tennis (lawn tennis and court tennis) from its beginnings through films, memorabilia and photographs. The hall of fame is home to all the greats and features interactive exhibits where you can learn about your favorite players. The beautiful site has 13 grass courts where the first lawn tournament was played in 1881, the forerunner of today's U.S. Open. Visitors can rent court time and see what it's like to play there. (194 Bellevue Avenue; 401-849-3990; open 9:30 a.m. to 5 p.m. daily)

The Museum of Yachting: With Newport's heavy focus on yachting, a museum dedicated to the sport is right on target. Ensconced on the top floor of a handsomely restored space inside the 1831 Aquidneck Mill on the campus of International Yacht Restoration School, the museum offers extraordinary harbor views and continually changing exhibits of sailing ships, art and historical artifacts. Visitors can walk around the school to see students at work, learning the art of building and restoring boats. (449 Thames Street; 401-842-0669; open noon to 5 p.m. Tuesday to Saturday)

Fort Adams State Park: While visiting Fort Adams State Park, you can tour the largest coastal fortifications in the U.S., garrisoned from 1824 to 1950. From the bastions, there are great views and the opportunity to explore the tunnels and casements to see where the soldiers lived. Visits are free, but an admissions fee is charged for guided tours. A beach and picnic area adjoins. The Harbor Shuttle makes stops at Fort Adams. (401-841-0707; open 10 a.m. to 4 p.m. daily, mid-May to October)

The Redwood Library & Athenaeum: Anyone who loves books will want to look into this lovely library. Founded in 1747 and opened in 1750, it's the oldest lending library in America and the oldest library building in continuous use in the country. Its classical design was a bold conception for its time. Architect Peter Harrison was inspired by a drawing of a Roman Doric temple with portico and wings. The library holds many valuable books and early portraits. (50 Bellevue Avenue; 401-847-0292; open 9:30 a.m. to 5:30 p.m. Monday to Saturday, noon to 5 p.m. Sunday)