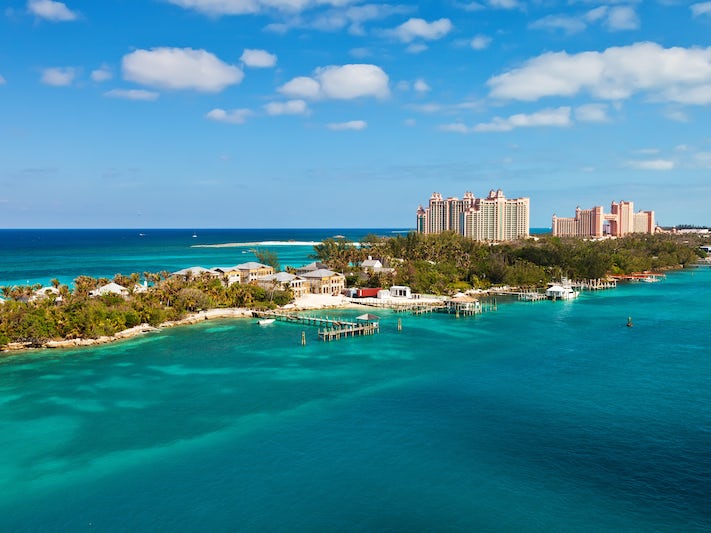 Popular Things to Do in Nassau

Perhaps no port is more synonymous with cruising than Nassau, an island in the Bahamas. Stretching about 80 square miles, Bahamas' capital city of Nassau welcomes more than 1,000 cruise ships per year, located just 180 miles off the Florida coast. Day visitors have the chance to explore popular shore excursions like the waterpark and aquarium at Atlantis Resort or swimming with dolphins. Wine enthusiasts might not expect to find one of the world's largest wine cellars in Nassau; more than 250,000 bottles are housed at the Graycliff Hotel & Restaurant, including vintages that are centuries old.

Summer months in the Bahamas are hot and humid, while the winter months (November through March) mark drier, more palatable temperatures (in the 70s Fahrenheit). English is spoken throughout the island, and the Bahamian dollar is equitable to the U.S. dollar so the two are used interchangeably. Don't hesitate to spend a few of either at the conch shacks throughout the island -- this local seafood specialty is a delicious treat any way it's prepared, especially with a cold beer.

Find Things to Do in Nassau on Viator

Food and Drink in Nassau

Cafe Matisse is our favorite spot on the island for a relaxing, languid lunch. Despite being named for a French artist, the food is Italian, and it's fresh and beautifully prepared. If it's a nice day, ask to sit out back in the serene courtyard. It's a five-minute walk from the cruise terminal. (Just ask for the police station; it's right next door.) The per-person cost for three courses, including wine, will run about $32. Reservations are recommended, but walk-ins are welcome. This is perhaps the island's most popular restaurant for locals, so it gets busy. (Bank Lane; open noon to 11 p.m. Tuesday to Saturday)

Graycliff is an eccentric, glorious, 20-room hotel with a gourmet restaurant that claims a 250,000-bottle wine cellar, a humidor and an onsite cigar-rolling facility. (Don't miss it -- it's fascinating, and you can buy the stogies at the onsite boutique.) It offers a wine luncheon, featuring continental cuisine with Bahamian influences, Monday through Friday from 11:30 a.m. to 2:30 p.m. Saturday lunch is for hotel guests only. Reservations are a must. (Call 1-800-476-0446 in the U.S./Canada or 1-242-302-9150 from other places.) The per-person cost for three courses, including wine, will run about $75. Graycliff is located across from Government House on W. Hill Street; it's within walking distance from the port.

You can find Oswald Greenslade, once Bacardi Bartender of the Year, at the Poop Deck in SandyPort (near Cable Beach). Author of the book One More Cocktail (available for purchase at the Poop Deck), Greenslade is also the mixologist behind our favorite Bahamian concoctions. Splish Splash is a heavenly drink made from Bacardi Select, Nassau Royal Liqueur, pineapple juice, bananas, cream and sugarcane syrup, but his colleagues insist he is best known for his Bahama Mama. If your ship offers an evening call, try happy hour from 5 p.m. until 7 p.m. (closed Mondays) -- complete with complimentary treats. Your best chance of catching Greenslade (and maybe even an autographed copy of his book) is on Friday nights.

With 52 free and natural beaches around Nassau, you don't have to pay to sunbathe in Atlantis. Junkanoo Beach is the closest to the cruise terminal.

Best for Active Types: Visit Paradise Island, where you can find all manner of water-sports rentals and eateries. Some say the most beautiful spot there is Cabbage Beach, on the north shore. Another good choice, closer to downtown, is Cable Beach, with all the usual beach amenities and dazzling resorts along baby-powder-soft sand. For great snorkeling, try Love Beach near Gambier Village, about 12 miles west of downtown Nassau, but be advised: Love Beach is the only officially designated nude beach on the island.

Best for Peace and Quiet: South Ocean Beach, close to Adelaide Village, is where it's at if you want an option that's a bit less-visited. Caves Beach in Rock Point (close to the airport turnoff on Blake Road) is another good out-of-the-way choice. The name is derived from the bat caves located directly across the street.

Though not quite as varied or option-plentiful as major duty-free destinations like St. Thomas and St. Maarten, shopping is a mainstay on Nassau. The Straw Market is a Nassau tradition, and you'll find all sorts of souvenirs on sale, from thatched purses to hair-braiding. The market officially reopened in its original location in December 2011. (It was destroyed by a fire in 2001 and relocated until a new $12 million facility could be built.) You'll find the rebuilt market, which houses more than 450 vendors, on Bay Street.

Duty-free shopping, centered on Bay Street, features the usual suspects, such as Diamonds International, Colombian Emeralds and Bacardi. Other retailers familiar to cruise travelers include Del Sol (for merchandise that changes color in the sun), Gucci, Harley Davidson and Tortuga.

Head over to the man-made island of Arawak Cay, a beach dusted with pastel-colored shacks, incredibly fresh conch from vendors cracking the mollusks right before your eyes, fried fish and grits, lime-marinated conch and plenty of coconut milk laced with gin. The strip known as Fish Fry is popular, especially with the locals, and it gets very crowded, especially on weekend evenings from 5 p.m. until midnight. It's located on the harbor, across from Fort Charlotte.

If you'd rather just spend the day as a guest at the showy, 34-acre Atlantis Resort on Paradise Island, consider purchasing a hard-to-come-by day pass, which gets you access to most of the must-see sights at the resort, such as the Dig, the marine habitats and their beach. What you won't get is the fun stuff around the pools and waterslides. You'll see a kiosk selling the passes by the cruise terminal -- or you can try to purchase one at the resort.

One of many scenic spots with a history on the island is the balcony of 18th century Balcony House, which also happens to be Nassau's oldest wooden structure. Step inside this island landmark to see the mahogany staircase, said to have been salvaged from a shipwreck in the mid-1800s. (Trinity Place at Market Street; open 9:30 a.m. to 4:30 p.m. Monday through Wednesday and Friday, 9:30 a.m. to 1 p.m. Thursdays)

For dolphin encounters of the bottlenose kind and seven stunning beaches, head for Blue Lagoon Island (aka Salt Cay). If it looks a bit familiar, you saw it in the film Splash. (The beach scenes were filmed there.) There are plenty of water sports to try and hammocks in which to idle, but for all things dolphin, make sure you plan ahead. You'll find plenty of amenities, such as showers and changing rooms, too. Catch the ferry from the cruise terminal.

One of the most popular cultural stops on the island is the 18th-century Fort Charlotte. It's fun to roam the dungeons and underground passageways and see the waterless moat -- but some say the amazing views of the harbor from the ramparts is the real attraction. Two other forts worth checking out are Fort Fincastle (overlooking the town from Bennet's Hill) and Fort Montagu (E. Bay Street), but Fort Charlotte is the largest. (Chippingham Road; open Monday through Saturday, with tours available from 8 a.m. to 4 p.m.; admission is free)

If you're in port on a Saturday, you might get to see the changing of the guard at the Government House (every other week) from 10 a.m. to noon on Duke Street, accompanied by the music of the Royal Bahamas Police Force Band. The official residence of the governor-general of the Bahamas since 1801, this bubblegum-pink mansion is an excellent example of Bahamian-British and American Colonial architecture.

Kids love the Pirates of Nassau, an interactive museum filled with pirate stuff. They can walk through a 75-foot, three-masted pirate ship, too. (Marlborough Street; open 9 a.m. to 6 p.m. Monday to Saturday and 9 a.m. to noon Sunday; tours are scheduled every half-hour)

We dare you to take a royal climb up the 66 steps of the Queen's Staircase, which was carved out of calcareous -- a coral-based sandstone -- at the end of the 18th century. The stupendous view is the prize for such athleticism. (Elizabeth Avenue)

Hop aboard the Seaworld Explorer for a 90-minute submarine tour. Think underwater observatory as you descend five feet below the water to observe the "sea gardens" through large glass windows. It's open daily and offers a tour at 11:30 a.m.; they add an additional tour at 1:30 p.m. from December through June. You must make reservations. (Bay and Elizabeth streets)

For an easygoing pool/beach day, the British Colonial Hilton offers a day pass for $40 that includes beach chairs, use of nonmotorized water toys, towels and a $30 credit for food and beverages. (So you wind up paying $10 for the beach.) The hotel is an easy stroll from the ship.

The Cloisters -- right in front of the Ocean Club -- is a 14th-century structure, built in France by Augustinian monks and reassembled in Nassau, stone by stone. Huntington Hartford, the A&P grocery heir, purchased the cloisters from the estate of William Randolph Hearst in San Simeon, California. This is one of only four cloisters to have been removed from France. It's located on Paradise Island.

Under the heading of Mardi Gras fun, check out the museum dedicated to the flashy Junkanoo Festival (a middle-of-the-night event the days after Christmas and New Year's Day) at the Junkanoo Expo. It's a chance to see the humongous costumes and floats. Check them out daily from 9 a.m. to 5 p.m. at Prince George Wharf.

The conch vendors are just part of the scene at Potter's Cay, a Bahamian marketplace beneath Paradise Island Bridge. There, you'll find plenty of vendors selling goods to both locals and tourists.

If you're curious about Bahamian food, culture and history, check out Tru Bahamian Food Tours. The company offers a three-hour walking tour around the main streets of Nassau and includes seven tasting stops, along with informative talks on local culture, history, architecture and more. Even if you're not all that into the learning part of the tour, the yummy conch fritters, jerk chicken, salted caramel dark chocolates and rum cake make it worthwhile.