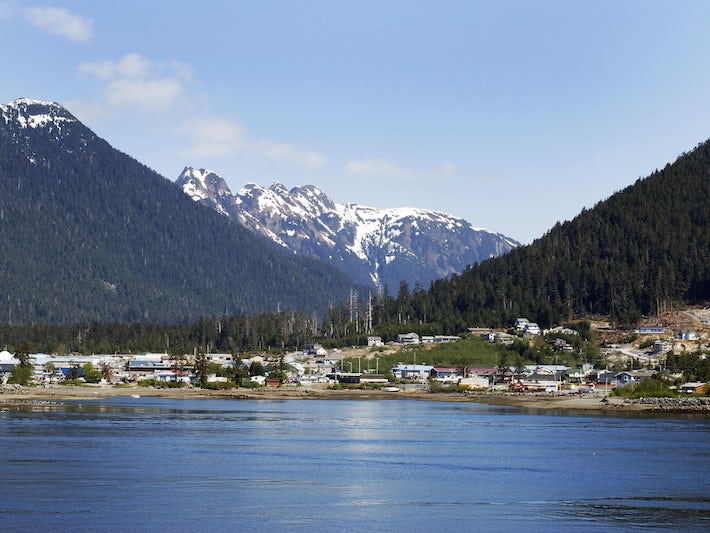 Popular Things to Do in Sitka

Having once been a part of the Russian empire, the small town of Sitka, in Alaska, has a fascinating history that also includes a rich indigenous culture. Sitka, which used to be the capital of Alaska, can only be reached via air or boat, making cruises an ideal way to visit. To learn more about the town's unique history, cruisers should book a shore excursion to Sitka National Historical Park to see the totem poles. Nature-lovers might try a visit to Tongass National Forest and/or stop at the Fortress of the Bear or Sitka Raptor Center to see some of the native wildlife.

The most popular time to visit Sitka is summer, when most cruises run and when the weather is more temperate. Rain is common year-round. While English is the official language in Sitka, many locals speak the native language of Tlingit. The U.S. dollar is the official currency.

Find Things to Do in Sitka on Viator

Food and Drink in Sitka

For such a small town, Sitka offers some interesting eateries. Seafood is a staple of this thriving fishing community, with Dungeness crab, halibut and salmon served up as fresh as can be.

Consider that Sitka doesn't rely solely on tourism, so the evidence of year-round residents in any of the restaurants is a great barometer of consistent food quality and service. You know when a spot is popular with the locals by the number of pickups parked out front at lunchtime. The food truck trend has also hit town, a boon to time-constrained visitors trying to see all that Sitka has to offer.

If you're a craft beer aficionado, be on the lookout for brews by local Baranof Island Brewing Company. (It's also possible to visit the brewery, located 1.5 miles from downtown.)

Beak: This new restaurant quickly became a favorite with Sitkans by featuring local seafood, meats and beers. The lunch menu includes salmon chowder, rockfish tacos, reindeer sausage, salmon burgers, kale salad and salmon mac and cheese. While prices might seem high at first glance, they include the gratuity, so factor that in. In nice weather, you can dine on the back porch. (2 Lincoln Street, in the back of the Cable House building shared with a radio station; 907-966-2326; Monday through Saturday, 11 a.m. to 9 p.m.; Sunday, 10 a.m. to 2 p.m.)

Ludvig's Chowder Cart: For a quick and tasty lunch, do as the locals do and pop into the Sitka Sound Science Center gift shop for chowder and baguette sandwiches with fillings like prosciutto or salmon salad. It's the only way for cruisers to sample one of Sitka's top restaurants, Ludvig's Bistro, which is unfortunately open only for dinner. (Inside the Sitka Sound Science Center gift shop, 834 Lincoln Street; 907-966-3663; May through mid-September, open Monday through Friday, 10:30 a.m. to 2:30 p.m.)

Backdoor Cafe: Another local favorite, this cozy downtown coffeehouse in back of a bookstore is filled with local artwork and serves custom-roasted espresso, homemade soup, bagel sandwiches and pastries. (104 Barracks Street, behind Old Harbor Books on Lincoln; 907-747-8856; open Monday through Friday, 6:30 a.m. to 5 p.m., Saturday from 6:30 a.m. to 2 p.m. and Sunday from 7:30 a.m. to 2 p.m.)

Bayview Restaurant and Pub: Stop in at Bayview Restaurant and Pub for burgers, locally caught fish and craft beers from independent breweries in Alaska and the Pacific Northwest, including the local Baranof Island Brewing Company. For something different, try a brew flavored with spruce tips. Got little ones in tow? There's a kids' menu (macaroni and cheese, chicken tenders, grilled cheese), plus coloring books and board games to keep them occupied. Brunch is served Sundays until 3 p.m. (407 Lincoln Street; 907-737-5400; open Monday through Saturday, 11 a.m. to late and Sundays, 9 a.m. to late)

Harrigan Centennial Hall: Most likely, this will be your point of entry to Sitka, whether by tender or shuttle. Pick up maps and information at the tourism office desk; visit the Sitka History Museum, with artifacts and exhibits about the Tlingits and the Russians, as well as Sitka's lumber and fishing industry; and catch a performance by the New Archangel Dancers, who often greet arriving cruisers with lively, authentic Russian folk dances. (330 Harbor Drive; 907-747-4090; open when ships are in port)

Castle Hill: With its commanding view of Sitka Sound, this 60-foot-high promontory, also known as the Baranof Castle State Historic Site, was an early stronghold of the native Kiksadi clan and later the site of a two-story log mansion referred to as Baranof Castle, after Russian governor Alexander Baranof. There's nothing left of the original structure, which burned in 1898. It's also the site where Alaska was officially transferred from Russia to the United States on October 18, 1867. The location is perfect for snapping pictures of the town and surrounds. (Accessible from Lincoln Street.)

St. Michael's Orthodox Cathedral: The onion-domed church is impossible to miss since it sits smack in the middle of Lincoln Street. Built in the mid-1800s, it was destroyed by a fire in 1966. As the building burned, residents formed a human chain to rescue the precious Russian Orthodox icons and religious objects stored there and managed to save about 90 percent. Today, you can tour the church, rebuilt to its 1848 specifications, and see those rescued treasures of Russian art. (240 Lincoln St.; 907-747-8120; opening hours vary, depending on when ships are in port)

The Russian Bishop's House: A National Historic Landmark operated by the National Park Service, this impressive structure across Lincoln Street from Centennial Hall was built in 1842. It's one of the oldest examples of Russian architecture in the U.S., and Sitka's oldest intact building -- now restored to the 1850s historic period when it functioned as a school, as well as the Orthodox Bishop's residence. Inside, you'll find a museum on the ground floor, with exhibits on the building's history, the bishops who lived here, the Russian-American Company and the fur trade. Upstairs (accessible only on a tour) is the recreated bishop's residence, ornate chapel and lending library. (501 Lincoln Street; 907-747-0110; open daily, 9 a.m. to 5 p.m. during the cruise season; tours every half-hour)

Sitka National Historical Park: Known locally as Totem Park, this scenic 107-acre site preserves and interprets the location of a Tlingit fort and the battle fought between the Russians and the Tlingits in 1804. A free, self-guided trail leads through a lovely temperate rainforest of Sitka spruce and hemlock trees, past numerous carved and painted totem poles to the site where the Tlingit fort once stood.

Tip: If it's salmon spawning season, keep an eye out for a footbridge over Indian River, where you can spot thousands of fish making their way upstream.

Don't miss the visitor center, which houses a small but impressive collection of Tlingit cultural objects and Totem Hall, displaying original totem poles and house posts from a collection that was gifted by Tlingit and Haida villages to be displayed at the 1904 Louisiana Purchase Exposition, in St. Louis. The center is also home to a studio where you can watch native artists at work on traditional crafts. (106 Metlakatla Street; 907-747-0110; May through September, open daily, 8 a.m. to 5 p.m.)

Sheldon Jackson Museum: Another National Historic Landmark, this octagonal structure was the first concrete building in Alaska when it was completed in 1897. It houses a wonderful collection of nearly 5,500 artifacts from all of Alaska's major native cultural groups, including masks, clothing, boats and hunting tools -- most of it gathered between 1888 and 1898 by missionary educator Rev. Sheldon Jackson. (104 College Drive, just off Lincoln Street; 907-747-8981; early May to late September, open daily from 9 a.m. to 4:30 p.m.; late September to early May, open Tuesday through Saturday, 10 a.m. to 4 p.m.)

Alaska Raptor Center: Experience bald eagles and other birds of prey up-close at this world-class wild bird hospital and sanctuary. You're likely to see eagles, owls, hawks and ravens; some are on the road to recovery and others are permanent residents, due to injuries that wouldn't let them survive in the wild. See bald eagles getting their wings back in the state-of-the-art flight-training center, and catch an educational show. (1000 Raptor Way, off Sawmill Creek Road; 907-747-8662; open daily May to September, 8 a.m. to 4 p.m.)

Fortress of the Bear: Want to see Alaskan bears up close? Fortress of the Bear was founded to create a humane home and natural setting for orphaned brown and black bear cubs. Their huge enclosures are repurposed water tanks at the town's former pulp mill. The grown bears sadly can't be returned to nature, according to local law, so you'll see some impressively large inhabitants.

Climb atop a covered platform to get a bird's-eye view of the bears as they loll on logs, splash through water features and hunt for live salmon. This refuge also provides an educational experience for visitors, as naturalists provide commentary during the visit. To visit the fortress and the raptor center, you'll need transportation. (4639 Sawmill Creek Road; 907-747-3550; May 1 through Sept. 30, open daily, 9 a.m. to 5 p.m., last admission 4:30 p.m.)

Sitka Sound Science Center: Kids will love all the aquatic touch tanks housed in this small education and research facility. They contain sea urchins, anemones, huge foot-wide starfish and more. There's also an orca (killer whale) skeleton and several aquariums with Alaskan sea life. Outside is a salmon hatchery and, in a separate building, a gift shop with lots of books, T-shirts and other fun items. (834 Lincoln Street; (907) 747-8878; during cruise season open Monday through Saturday, 9 a.m. to 4 p.m.)

Naa Kahidi Dance Show: Watch a traditional dance performance at the Tlingit Clan House. The performance begins with a resonating box drum as visitors gather around a burning cedar fire pit. For 30 minutes, native Tlingit dancers of all ages perform to a number of traditional songs. (200 Katlian Street; 907-747-7137; check online calendar for show times, which are often around midday)

Harris Aircraft Services: This local company operates a floatplane business that takes visitors on flightseeing tours over the scenic backcountry and glacier ice fields of Baranof Island. There are standard 20-, 40- and 60-minute tours. (400 Airport Road; 877-966-3050)

Hiking Trails: A 10-minute walk from downtown, Sitka brings you to the fringe of true wilderness, with access to numerous marked hiking trails. The Gavan Hill Trail offers a moderate to strenuous hike with boardwalks, an elevation gain of 2,000-plus feet and, after about 3 miles, an excellent view of the Sitka Sound. (For those looking for a briefer walk, the first quarter-mile of this trail, which starts from the Baranof Street trailhead, is ADA-accessible.) The Indian River trail -- 4.1 miles each way -- makes an easy, gradual climb to a waterfall. You can pick up hiking trail maps and information at the office of the Sitka Ranger District of the U.S. Forest Service. (2108 Halibut Point Road; 907-747-6671)