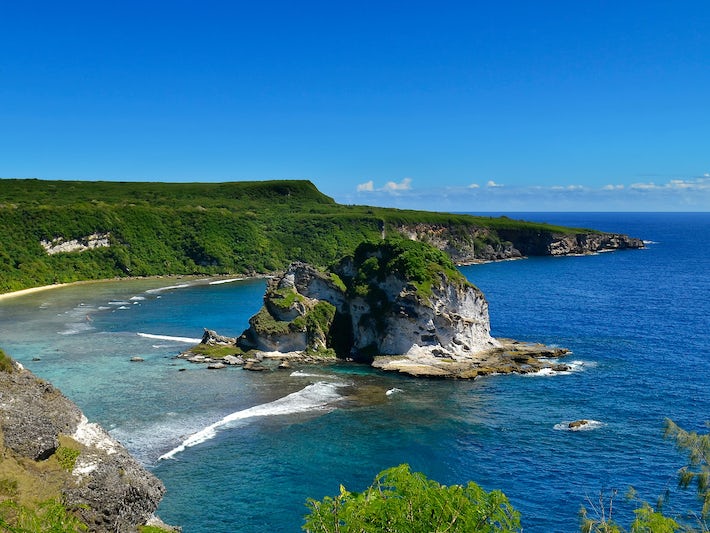 Find Things to Do in Saipan on Viator

Popular Things to Do in Saipan

Food and Drink in Saipan

Garapan is easy on the palate, no matter your preference. For an island specialty, ask for the chicken kelaguen, barbecued chicken breast tha's chopped and served with freshly grated coconut, onion leaves and hot peppers.

In the tourist district, you'll find Chinese, Korean, Thai and Japanese restaurants. One of them, Ubu Restaurant, offers free wireless Internet access. The top hotels, namely Hyatt Regency and Pacific Islands Club, tend to house the better restaurants. The Hyatt, for example, specializes in Italian, Japanese and Chinese cuisine. More interested in a fix that reminds you of home? Then look no further than the golden arches. Yes -- they're here.

For an exceptional depiction of the historic Battle for Saipan, visit the American Memorial Park Visitor Center and World War II Exhibit Hall. The facility, operated by the National Park Service, opened in 2005 after more than six years in development. In the Exhibit Hall, you'll see footage of U.S. Marines crawling up the invasion beaches, amid exploding ordnance and open gunfire. You'll hear the drone of planes running strafing missions. In one of the most desperate scenes of the battle, thousands of Japanese soldiers and civilians committed suicide, rather than surrendering to U.S. forces. In a stunning recording, a Japanese woman describes how she fled from the Marines and was preparing to jump to her death when she was captured by American troops. The 10,000-square-foot building, representing a Chamorro boat house, is open Tuesday through Sunday from 10 a.m. to 5 p.m. On the grounds, there's also a 1,200-seat amphitheater, a wetland and mangrove forest, Micro Beach, and the Marianas Memorial, honoring the indigenous people who lost their lives in the campaign.

No stop in Saipan would be complete without having a look at the chief landmarks of the horrific battle: the invasion beaches; Suicide and Banzai cliffs, where Japanese families and soldiers jumped to their deaths; and the Last Command Post, a cave where the Japanese readied themselves for their last push against American forces. There are also a number of peace memorials, World War II bunkers and a Japanese jail where pilot Amelia Earhart is rumored to have been held. Ask your rental car agency for a map of the landmarks, or look out for signs at the sites themselves.

Saipan's beaches are famously known in the region, and Micro Beach, a favorite of tourists and locals alike, is right in town and easily accessible. Amenities include a play park and water sport facilities along this stretch of pristine white sand (which shows up in a lot of Japanese TV commercials). Other popular beaches include Lau Lau, a good swimming spot, and palm-lined Obyan, which looks across to Tinian Island. Another terrific option: Blue Grotto, an ocean cave permeated by diffused sunlight.

One of Saipan's most popular tourist attractions is a submarine ride in Tanapag Lagoon. The sub has been specially designed with large viewing ports for full access to the area's tropical fish and wartime wrecks.

Active types should check out the diving and snorkeling opportunities. Several fabulous diving sites lay just off of Saipan, with attractions such as WWII wrecks, beautiful reefs, wall and cavern dives and a variety of marine animals -- among them, eagle rays, eels, octopi, butterfly fish and sharks. Visit www.mymarianas.com to get the specifics on diving outfitters.

Saipan boasts five golf courses, known for their impressive scenery and remarkable challenges. Several were designed by PGA players, and all are open to cruise ship passengers.

For some real local flavor, try your hand in one of the island's many poker houses. Poker machines are big business in the Northern Mariana Islands, and the electronic gaming devices -- which are legal -- can be found in virtually every village. They're open 24/7.