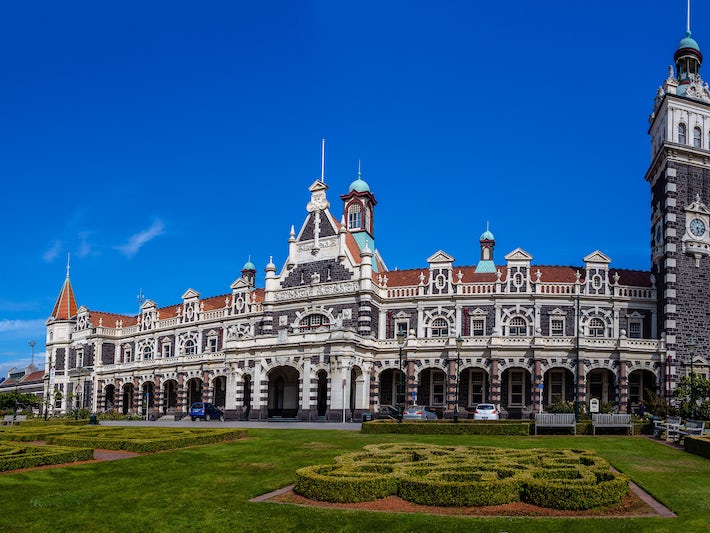 Find Things to Do in Dunedin on Viator

Popular Things to Do in Dunedin

Food and Drink in Dunedin

An excellent range of restaurants, cafes, and breweries are within walking distance of The Octagon. Additionally, the Warehouse District is Dunedin's historic industrial area with many establishments housed in the repurposed buildings. Many restaurants offer menus that feature locally sourced ingredients, fresh seafood and vegetarian options.

Plato: Located in a converted Seaman's Mission near the docks of the freight yard, Plato has an emphasis on South Island fish and seafood, local produce and organically grown herbs. Menu items include homemade fish and chips, white fish pie and crispy squid. Plus, Plato brews its own boutique beer onsite at Birch St Brewery.

Velvet Burger: Craving a burger? Choose from a menu that includes 14 varieties of gourmet burgers including vegetarian options. Try Velvet Burger's signature Beet Drop Burger, a New Zealand grass-fed beef and beetroot patty. Those with less of an appetite will appreciate the option of the smaller mini burgers, which are a fraction of the price. Don't forget to order a side of fried pickles or native kumara chips (aka sweet potato fries).

The Portsider: Located in a Port Chalmers' Victorian-era Heritage building, this upscale pub is the perfect place to perch at the end of your day before heading back onboard the ship. The Portsider has a selection of New Zealand craft beers on tap and its menu is not your regular pub fare. The bread is made inhouse and the fish and chips are served with homemade tartare sauce and hand-cut fries.

Speight's Brewery: Speight's has been brewing in Dunedin on the same site it has occupied since 1876. The guided tours through Speight's historic working brewery offer a mix of Dunedin history and technical brewing information. The best part of the tour is the 30-minute unlimited sampling session of Speight's beers. Stay for lunch at the Speight's Ale House or buy some beer gear at their onsite shop.

Emerson's Brewery: Take a behind-the-scenes tour of this local craft brewery and taproom and learn every step of the brewing process, from the malt room, to the fermentation, bottling, and most importantly, tasting. Emerson's Taproom has more than a dozen beers on tap, including their flagship dark beer, London Porter. The lunch menu is extensive including sharing platters and options for kids.

OCHO (aka Otago Chocolate Company): Take a tour of OCHO's Vogel Street factory and learn about its chocolate-making process. OCHO use ethically grown cacao beans from the Pacific and roast, grind, temper and wrap the chocolate bars by hand. All of OCHO's handcrafted chocolate bars are nut-free and most of its chocolate is vegan except for a few items such as the Sea Salted Chunks of Caramel.

Otago Farmers Market: If your cruise ship is in Dunedin on a Saturday, this is where you will find the locals. Located adjacent to Dunedin Railway Station, more than 60 local artisan stalls and food vendors sell takeaways that include falafel, crepes, smoothies, coffee, craft beer and more. It's also a great spot to pick up a souvenir such as bean-to-bar chocolate, beeswax products and handmade jewelry.

Dunedin Railway Station: The Dunedin Railway Station is one of the most photographed historic buildings of Dunedin. Built in 1906, it was New Zealand's busiest railway station at the time, handling up to 100 trains per day. It resembles a gingerbread house with a mix of architectural styles that include Victorian, Flemish Renaissance, Edwardian and Gothic. The exterior of the building is an eclectic combination of dark basalt, white limestone and pink granite. Inside, the railway station is also a work of art, with thousands of mosaic tiles adorning the main lobby area.

Dunedin Botanic Garden: Established in 1863, this is New Zealand's oldest public garden. During the early 1900s, it increased in size and today occupies more than 29 ha in North Dunedin. Check out the aviary, statues dotted around the garden along with more than 6,800 plant species in distinctive gardens including the Rhododendron Dell (which has more than 2,000 rhododendrons), the glasshouse and herb garden where visitors are welcome to pick small snippets to savour the smells.

First Church of Otago: Built in 1873, in Gothic architecture, this was Dunedin's earliest church. It is built from stone and features a 56m-long spire and colourful stained glass. Unfortunately, there is no public access to the belfry. Check out Moray Hall, which is now the Heritage and Visitors' Centre and exhibits photos, postcards, articles, ship passenger lists and details explaining the strong Scottish connection with the original Minister, the Rev. Thomas Burns.

Otago Museum: The Otago Museum was founded in 1868 and is one of Dunedin's most visited attractions. Over the years, it has undergone many changes and today has a collection of more than 2 million natural science specimens and human history artifacts. Learn about New Zealand's maritime history, fur seals, and the region's Gold Rush as well as the people that have left their mark on Dunedin.

Olveston Historic Home: Built in 1906, the elegant 35-room estate and gardens are a remarkable example of the era's architecture and how privileged families lived during that time. The brick and plaster mansion feature grand fireplaces, colourful stained-glass windows and an art collection that includes more than 200 paintings and artifacts from the original owner's travels throughout Asia.

Taiaroa Head: Located at the end of the Otago Peninsula, Taiaroa Head is home to breeding fur seals, sea lions, a royal albatross colony, blue penguins and a yellow-eyed penguin reserve. In this case, it is best to book a wildlife tour through the cruise lines, as it is more than an hour's drive to Taiaroa Head. Make sure you take a photo of the Taiaroa Head Lighthouse.

Larnach Castle & Gardens: Although it's not officially a castle, this sprawling 3,716 sq. m Gothic Revival mansion was built by a prominent politician in 1874. It has been completely restored and sits atop the Otago Peninsula with panoramic views of Dunedin and Otago Harbour.

Baldwin Street: Baldwin Street, located in northeast Dunedin, is recognised by Guinness World Records as the steepest street in the world. Back when the original city's surveyor was planning the city, he failed to take into consideration that the topography of Dunedin was much hillier than Edinburgh. One quirky result was Baldwin Street.

Port Chalmers Maritime Museum: This maritime museum provides a glimpse into the region's nautical past as a port for shipping, commercial fishing and exploration. Located just outside the cruise terminal building at the bottom of George Street, the museum is housed in the former Port Chalmers Post Office, an 1876 Heritage Building. Visitors can peruse collections that include photographs, books and historical objects.