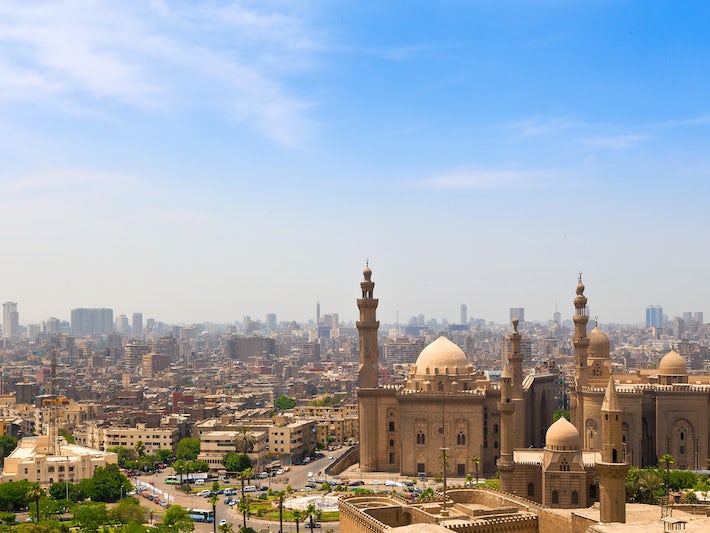 Find Things to Do in Cairo (Port Said) on Viator

Popular Things to Do in Cairo (Port Said)

Egyptian cuisine depends heavily on fresh ingredients -- herbs, spices, garlic, lemon, vegetables -- and its two staples are fava beans and aish, the national bread that's a mixture of plain and whole meal flour and looks like a darker, round version of pita bread. You can sample the cuisine in one of Cairo's many restaurants, although the better ones are in Garden City, Zemalek Island and other affluent areas of town. If you're worried about your stomach, stick to indoor places that draw large crowds instead of eating from stands or stalls.

Egypt is a country that lives on tips; you'll find yourself making small baksheesh payments to everyone from the man who hands you a flashlight at the pyramids to the woman who guards the public toilets. In restaurants, you'll want to tip between 10 and 15 percent.

The Garden Promenade Cafe at the Cairo Marriott on Zemalek Island is a favorite of wealthy Cairenes and tourists alike -- and it's no wonder. It's one of Cairo's few secluded outdoor spaces -- an oasis, housed in a 19th-century palace on the Nile. Menu options include freshly made pasta, pizzas, salads and traditional dishes, such as kebabs and kofta or ground meat. There's also a bakery inside the hotel that serves 14 types of bread, 28 French pastries and Movenpick, a terrific Swiss ice cream. It's pricey, though.

Also on Zemalek Island, Sequoia is a sprawling lounge that will make you feel like you're among Cairo's fabulous. Sit in comfy chairs under the tentlike tarp, enjoying the breezes off the river while you eat sushi or smoke a shisha (water pipe). As befits a Muslim city, Cairo doesn't have a ton of places to drink alcohol, but this is one of them. Reservations are recommended, and there's a minimum charge. It's on Abu El Feda Street at the northern end of the island.

Once the home of wealthy pashas, leafy Garden City is now the home to the American and British embassies, as well as top Western hotels -- which is why the neighborhood is surrounded by Egyptian security forces. Tell them that you're going to Taboula, a warm restaurant with Middle Eastern decor and Lebanese meze favorites, such as hummus, grape leaves, grilled cheese and baba ganoush. The restaurant, open noon to 1 a.m., is tucked away at 1 Latin American Street.

For fantastic seafood and Middle Eastern salads, the moderately priced Americana Fish Market is as good as it gets. Diners choose from a large selection of freshly caught fish. Then choices are weighed, cooked to order and served with salads and aish, produced right out of the kiln. On top of that, the restaurant is located on the upper deck of a permanently moored boat on the Nile. The restaurant, open daily from 12:30 p.m. to 2 a.m., is located at 26 Sharia al Nil in Giza.

Also in Giza, Khan El Khalili in the gorgeous Mena House Oberoi Hotel can't be beat for its breathtaking views of the Pyramids. It's open 24 hours and has a fantastic breakfast buffet. If you're in Giza around dinnertime, check out the hotel's popular Indian restaurant, The Moghul Room.

Cairo has a well-established cafe culture; as you ride through the city, you'll see countless storefronts where men sit outside, having cups and smoking a shishas filled with flavored tobacco. One of the most famous, the El Fishawy, is in the bazaar. Note that few women smoke shisha in public; if you'd like to indulge, you're best buying a pipe at your hotel or at an expat-heavy restaurant, such as Taboula.

The Pyramids of Giza took 100,000 men 20 years to build, and they continue to fascinate observers 45 centuries later. For some visitors, their first looks at the storybook icons are sometimes disappointing because of the crowds, the tour buses and the vendors. And the three main pyramids are by no means in the middle of nowhere, as so many photos suggest. A string of hotels and apartment buildings lie just across the boulevard -- part of suburban Giza, which lies 11 miles south of Cairo. Still, there is something wholly mystical about the Great Pyramid of Khufu, the first and largest pyramid built at Giza -- and the sole surviving member of the Seven Wonders of the Ancient World. Visitors can climb into the mausoleum through a corridor that descends into an unfinished chamber. Take the time to walk around this limestone edifice, and it's still possible to summon its ancient power and grandeur.

An unexpected bonus at the site is the Solar Boat Museum, which houses the Lebanese cedar boat intended to deliver King Khufu to the afterlife. It is one of five boats that were buried next to the pyramid and is thought to be the oldest boat in existence. Remarkably, the boat was assembled from 1,224 pieces, completed in 1980, and everything is original except for its ropes. A wooden version of a papyrus reed boat, it is displayed in fine fashion -- suspended over upper and lower galleries that give visitors full visual access.

Nearby, the eroding Sphinx, enclosed by fencing to protect it, stands sentry over the Giza plateau. A symbol of Egypt for thousands of years, the Sphinx has the body of a lion and the head of a king or god. Because of the changing desert terrain, the monument has been buried repeatedly, most recently in 1905.

No visit to Cairo would be complete without a visit to the Egyptian Museum of Antiquities, which contains more than 120,000 artifacts -- most of them recovered from the nation's tombs and temples. Among the crowd-pleasers: King Tut's death mask, made of solid gold and jewels; life-size statues of the pharaoh that guarded his burial chamber; furniture -- including his throne -- that filled the tomb; and Tut's wig box and wardrobe. Amazingly, Tut's umbrella, gloves and underwear are also on display.

Another fantastic corner of the museum is the dimly lit Royal Mummy Room, which houses 11 of Egypt's most illustrious pharaohs and queens -- the most famous being Ramses II, the great pharaoh who built the temples of Abydos and Abu Simbel and added to the temples of Karnak and Luxor. A couple of the mummies are wrapped in garlands of flowers. Others are so well-preserved that it's possible to see wounds, curly hair and pierced ears. It's well worth the extra admission fee. The museum, which is not air-conditioned, is literally teeming with treasures -- which is also its downside. This incomparable repository outgrew its space years ago, and its successor -- the Great Egyptian Museum, on a site near the Giza Pyramids -- is years from completion.

The Citadel, located on a spur of limestone above Cairo, is rightly one of Egypt's main attractions. Built in 1176 by the Kurdish general Salah ad Din to protect against attacks by the Crusaders, the fortress is home to several museums and monuments, including the Mohammed Ali Mosque, built in Ottoman Baroque style in the mid-1800's. The "Alabaster Mosque," as it is called, can be seen from every part of Cairo and offers magnificent views across the city. (You can even see the Pyramids of Giza if it's not too smoggy.) Modeled after the great mosques of Istanbul, it is distinguished by its dome and two slender minarets. Outside the mosque is an ablution fountain, where the faithful wash before prayer. The interior is modest -- the floors covered with prayer rugs and ceiling accented with, of all things, a French chandelier.

In Giza, you're there; the camels are there. Why not take a camel ride? There's a camel concession at the Pyramids of Giza that's on the up and up -- look for the vendors on the plateau behind all three pyramids. The ride -- you'll be surprised at how bumpy it is -- takes about 20 minutes, and the operator prefers to be paid in U.S. currency: $4 plus a $1 tip.

The Sphinx (impersonated by actor Anthony Hopkins) narrates this 50-minute sound and light show -- produced at varying times in English, French, German, Spanish, Italian, Russian, Japanese and Arabic -- at the Pyramids. The storyline depicts the building of the ancient monuments, and though it is somewhat cheesy, it's a fine way to experience them at night.

A Nile dinner cruise is another way to experience nighttime Cairo. Some offer dinner buffets, while others throw in floor shows with belly-dancers and singers. The Pharaohs Cruising Restaurants and Nile Maxim, run by the Marriott, are two reputable operators.

Cairo's main public gathering place, Tahrir Square, has become a tourist attraction in its own right, as visitors flock to see the site where the Egyptian revolution unfolded in January 2011. Situated within walking distance of the Egyptian Museum, the square has mostly reverted to its main role as a traffic circle, although regular protests are still often held on Fridays after Muslim prayer services. If you're planning to visit, check with your hotel or the State Department first to see if any alerts or warnings have been issued.

If you have the chance to visit one neighborhood in Egypt, make it Coptic Cairo. One of the oldest areas in the city, Coptic Cairo was one of the first Christian strongholds, and the faithful believe that the Holy Family lived there during their flight into Egypt. Sights include the Hanging Church (built in a location that has housed a church since the third century), the Babylon Fortress which was part of Cairo's original structure, and the Coptic Museum, which holds an incredible collection of early Christian artifacts.

In a rural area 45 minutes away from the Pyramids is Saqqara, one of the largest burial grounds in Egypt. It's best known for the Step Pyramid, the oldest of the nation's 97 pyramids. Discovered in 1821, the tomb was designed by the architect Imhotep for King Zoser in the 27th century B.C. Prior to the pyramid's construction, pharaohs were buried beneath rectangular mud-brick tombs.