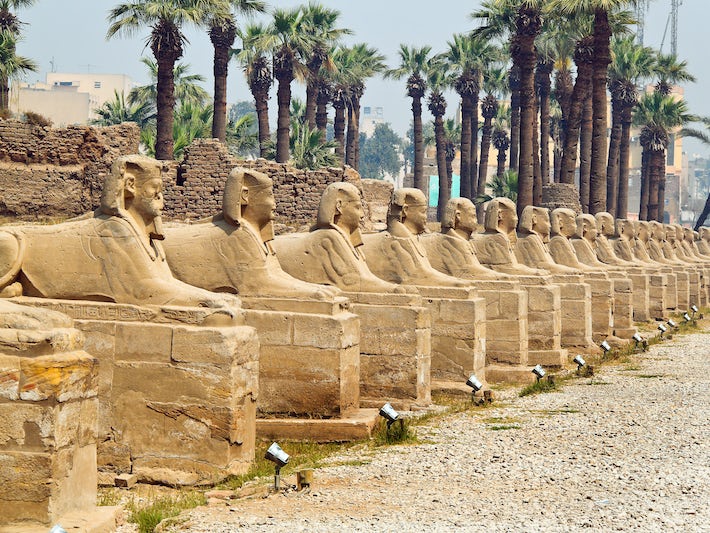 Find Things to Do in Safaga on Viator

Popular Things to Do in Safaga

Food and Drink in Safaga

The grandeur of Luxor Temple (open daily, 6 a.m. to 9 p.m.) will amaze you, particularly since the well-preserved temple of ancient Thebes doesn't leave much to the imagination, in terms of how it looked at its height. Located in what, today, is the center of the city, the temple was constructed in the 14th century B.C., and several pharaohs -- including King Tut -- added their own touches. Ramses II added a statue of himself and two huge obelisks, one of which was traded to France in the late 1800's and now stands in the Place de Concorde in Paris. (It was traded for a French clock, which never worked.) Alexander the Great and various Roman leaders also left their mark. A mosque was added to the interior courtyard in the 13th century.

Karnak Temple (open daily, 6 a.m. to 5:30 p.m.) is a magnificent temple complex with several sanctuaries. Also housed there are obelisks, built and enlarged over a period of 1,500 years and dedicated to the Theban gods and great pharaohs. You enter on an avenue of ram-headed sphinxes that will likely have your jaw dropping before you even see the Great Court with its 134 huge columns. A nighttime light and sound show is popular with visitors who overnight in Luxor.

The Valley of the Kings (open daily, 6 a.m. to 4 p.m.) is located on the west bank of the Nile River (across from Luxor on the east bank) and is an isolated, mountainous area where the great pharaohs were laid to rest in tombs dug into barren cliffs. It's about a 15-minute walk to reach the tombs -- often very hot in the desert climate. But, most tours include tickets to trolleys that take you closer to the site. (Be aware, though, that walking is still involved, and some of the tombs have steep steps on sloping pathways as entrances.) Your entrance ticket allows you a chance to visit the chambers of three underground tombs; you have to purchase a separate ticket (for about $1) if you want to see the tomb of King Tutankhamun (King Tut), but be aware that, of all the tombs, this one is the least attractive, with few of the exquisite paintings you'll find in other tombs. There are more than 62 tombs that have been excavated, but only about eight -- which vary -- are open to visitors at any one time. The tombs date back some 3,500 years and are tributes to the ancient Egyptian belief in the afterlife. They contain colorful hieroglyphic texts and images of the kings. They once also contained gold, jewelry and other things thought to be useful in the afterlife -- including everyday household items -- but these have all been moved to museums, as anyone who has seen the traveling King Tut exhibit can attest.

Editor's Note: It's estimated that only one-third of Egyptian antiquities have been discovered. Who knows what the rest of the desert sands are hiding.

Safaga is famous for windsurfing, with the nearly constant warm winds attracting surfers, especially in spring and fall. A popular place to surf is Tobia Island, a white sand island less than two miles from shore. There are a number of windsurfing vendors in town, including Tornado Surf at the Holiday Inn Safaga Palace. Beginner courses are available. Rental of windsurfing equipment is $80 for five hours, and courses start at about $189 for a six-hour lesson.

There are several dive operators in town, offering dive excursions to reefs that include the sheer walls of Abu Kafan; Panorama, which boasts huge coral formations; and Middle Reef, with hard coral gardens, rated some of the best in the Red Sea. Creatures often seen include barracudas, tuna, manta rays, reef sharks and sea turtles. The dive operation at the Lotus Bay Beach Resort and Gardens is called Barakuda Diving Center and has six boats, all with spacious diving platforms. They leave at 8:30 a.m. daily and return by 5 p.m. Night dives are also regularly offered. A full-day excursion with two dives is priced at about $59. Divers who are prepared for a poignant experience may want to visit the wreck of the Salam Express, an Egyptian passenger ferry that sank on its way back from Mecca in 1991 (a major disaster in which some 300 passengers perished).

Thirty-six miles to the north is Hurghada, a town offering similar diving and windsurfing attractions, but with a much more developed resort atmosphere. (Shore excursions are offered there, including day trips to fancy resorts.) Hurghada also serves as a launching point for desert safaris by Jeep or camel.