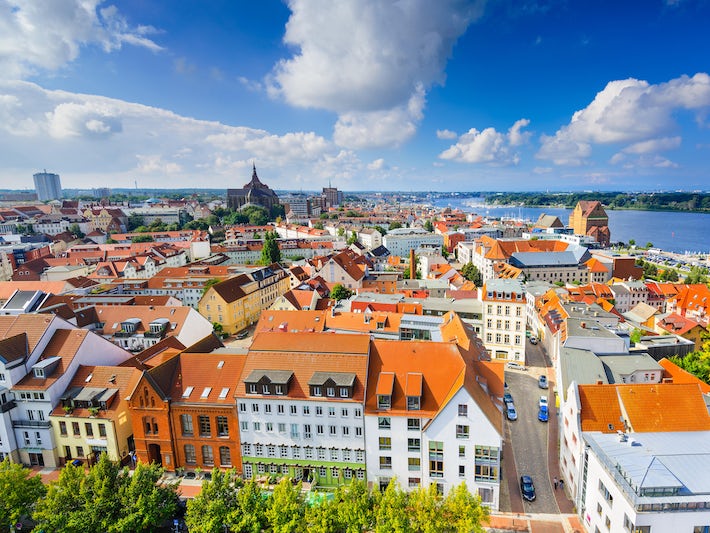 Find Things to Do in Rostock (Warnemunde) on Viator

Popular Things to Do in Rostock (Warnemunde)

Food and Drink in Rostock (Warnemunde)

Old fishing boats line the left bank of the Warnow, selling fischbroetchen - fried fish sandwiches -- the local specialty. During the Hanseatic era, herring was an important trading commodity, and herring still rules as a favored nosh, typically fried and served on a roll. With some 2,000 kilometers of Baltic Sea coastline and more than 2,000 lakes, the fish couldn't be fresher. Try it fried, smoked, pickled or baked in Bierteig, a beer-based pastry. Bratwurst, breads and fruity jams round out a seaside picnic.

Kettenkasten: Located on the riverbank, this place has a beer garden and live music and serves fried fish, herrings and pork ribs. (Am Strom 71; open from 11 a.m.)

CuBar: This is an old pilothouse serving Cuban specialties. It's a popular choice among crewmembers. (Am Strom 124; open all day)

Zur Kogge: In Rostock, Zur Kogge is a wonderful, old pub by the waterfront. It is absolutely festooned with maritime memorabilia and serves local specialties. Try the lightly fried plaice with herb sauce. (Strandstrasse; open from 11:30 a.m.)

St. Mary's Church: The astronomical clock in Rostock's St. Mary's Church dates to 1472, is amazingly elaborate and still works. It is able to predict the phases of the moon with absolute accuracy and is the oldest remaining piece of its kind.

Monastery of the Holy Cross: This abbey in Rostock serves as the city's Cultural History Museum and houses wonderful medieval art. After visiting the museum, explore the solid city ramparts, or admire the architecture in University Square.

Harbor: Tours operate along the Warnow in Warnemunde and cost about 14 euros for 30 minutes. They're more of a photo opportunity than an in-depth exploration but are a pleasant enough way to admire old houses and fishing smacks lining the river.

Walking: Wander along the Warnow river, have a beer in a pub garden, eat a fried fish sandwich, admire the old-fashioned lighthouse and dramatic lines of the Teepott exhibition center Then, stroll along the seafront to watch kite surfers, and you've enjoyed a good taste of Warnemunde.

Warnemunde Beach: Pack a kite for the cruise, and fly it on this seemingly endless stretch of sand, backed by dunes with large rollers and perpetual gales blowing in from the North Sea. (Kites are only allowed in certain beach areas; look for other kite-flyers or make your way to beach block 1.)

Strandkorbs: These cute wicker beach chairs -- a 19th century invention -- have comfortable cushions, pull-down shades, pop-up footrests and storage to keep your gear from blowing away. The beach is absolutely riddled with them, and you can book them for the day.

Bunker 302: Take a trip back to the days of the Cold War with a visit to an atomic radio bunker at Eichenthal -- a 20-minute drive from Rostock. The bunker, which contains all of its original monitoring equipment, was completed in 1986 but became redundant with changing political relations and is now open to the public. It's dark, chilling and spooky -- but fascinating if you're into military history. Tours take about an hour.

Former Stasi Detention Center: 34b Hermannstrasse, Rostock is a grim reminder of the dark days of the German Democratic Republic (East Germany). You can see the tiny cells where political activists were detained and learn about the hated security service from a permanent exhibition.

Schwerin Castle: Perched on an island outside the eponymous state capital, this site is 90 minutes from Rostock. With gleaming, golden roofs and delicate turrets, it's like something from a fairy tale. In the neighboring State Museum, there's an incredible collection of works from Dutch and Flemish masters. They're all there -- Rubens, Rembrandt, Fabritius and Hals, as well as more contemporary works by Duerer and Picasso. Most cruise lines offer Schwerin as a half-day tour, leaving the rest of the day free to putter around Warnemunde.