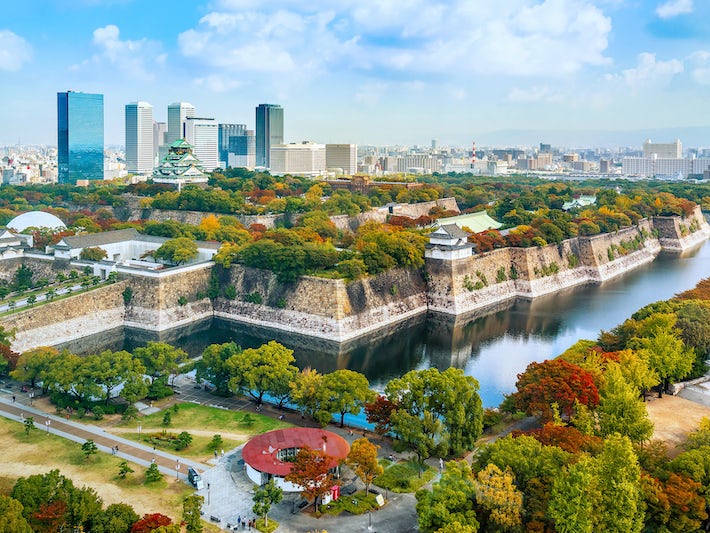 Find Things to Do in Osaka on Viator

Popular Things to Do in Osaka

Food and Drink in Osaka

With its unofficial motto of "cheap but delicious," Osaka is a great place to score a foodie's fix. Restaurants crowd the streets and many have picture menus, often posted outside, to help you order. Among many other dishes, Osaka is associated with shabu shabu, a savory hot pot similar to sukiyaki; kitsune-udon, noodles in a slightly sweet broth seasoned with fried bean curd and chopped chives; yakitori, traditional Japanese chicken or beef kebobs; and, of course, sushi, sashimi and tempura dishes. Many of the shopping arcades and underground malls have food courts as well as restaurants. There are also countless restaurants within walking distance of Tempozan Pier.

The city's best-known attraction is Osaka Castle, originally completed in 1583 and later destroyed. Today's reconstructed fortress, built in the 1930s, has a collection of exhibits related to the castle and Toyotomi Hideyoshi, who first built the castle as the permanent residence of the ruler of Japan. On the eighth floor is an observation deck offering great views of the city. The extensive grounds, with 5,750 Japanese plum and cherry trees, are also worth a look. A trolley circles around Osaka Castle Park from 9 a.m. to 5 p.m. It costs 200 yen (roughly $2).

he oldest Buddhist temple in Japan, Shitennoji, was founded in 593; today the complex, none of it original, continues to operate as an active place of worship. Based on the philosophy of Wa, or harmony in all things, the temple has formed its own sect of Buddhism with the goals of pursuing good works in the areas of education and social welfare. Beloved by the local people, Shitennoji is a model of classic temple design with its five-story pagoda; kondo, or main hall; and kodo, an assembly hall. It also has two teahouses.

To fully appreciate Osaka's zest, explore it on foot. In addition to America-Mura and Shinsaibashi, other areas worth visiting are Tenjimbashi-Suji, the longest shopping street in Japan, and the lively Dotonbori district, noted for its nightclubs, restaurants, shops and a new promenade along Dotombori Canal. Take a cab or the subway to your destination and then wander as long as your feet will let you.

To view the bright lights of Osaka at night, take a river cruise. The Naniwa Tanken Cruise and Osaka River Cruise pass under 48 bridges during a one-and-a-half hour tour in Dotonbori, the city's liveliest nightlife district. Cruises depart from Minato-Machi River Place.

The nine-acre Universal Studios Japan, like its two sister parks in the U.S., offers a variety of shows, rides, restaurants and attractions. Missing home? Check out the Land of Oz, Water World and Jurassic Park. A one-day pass costs 5,000 yen (about $50).

Ferris wheel ride, anyone? This town loves Ferris wheels. Check out the rides at Tempozan Pier and on top of Umeda Mall.

Ride a bullet train to Kyoto, a popular side trip because of its 2,000 ancient shrines and temples. Remarkably, Kyoto hosts a total of 17 World Heritage sites. Kyoto is a two-hour drive from Osaka, or a 30-minute ride on the bullet train, called shinkansen. The train travels at over 186 miles per hour.