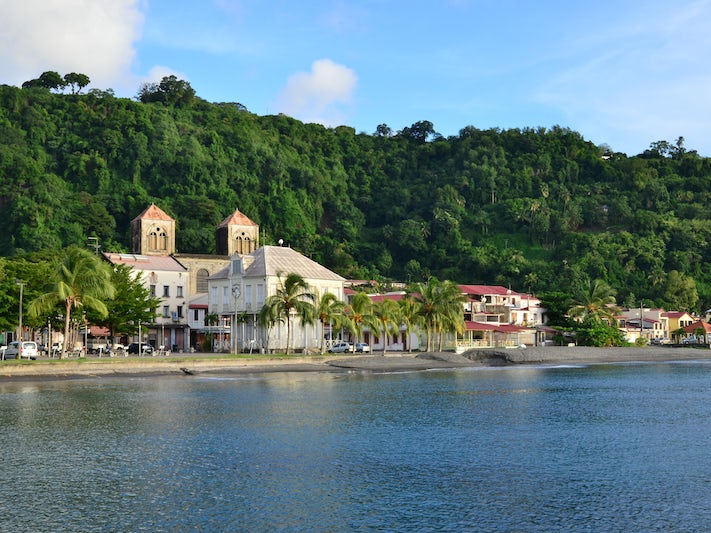 Popular Things to Do in Martinique

Martinique is a French territory in the sunny Caribbean. It's a veritable paradise for nature-loving cruisers; the island is covered in lush rainforest and gorgeous and varied beaches. Martinique is surprisingly large, so booking a shore excursion can help expedite visits to the island's main sights. For instance, hiking Mont Pelee is an all-day excursion, or one could easily spend most of the day simply laying in the sun or playing in the water at the beach in Pointe du Bout. Other cruisers might be interested in excursions that stop at the La Pagerie museum to learn more about the island's history, followed by a leisurely French-style lunch.

Martinique's weather is consistently hot all year long, but the winter months are drier and less humid, making it the most popular time to visit. The official currency is the euro, and cruisers should not expect American dollars to be acceptable as they are in many other Caribbean destinations. Locals speak French.

Find Things to Do in Martinique on Viator

Food and Drink in Martinique

Traditional food on Martinique is split between Creole and French. Menus feature lots of Caribbean dishes that incorporate chicken, seafood and fresh fruits and vegetables, and you'll also find French-inspired cuisine, including foie gras and boudin noir (blood sausage). If you try one local dish while you're in town, make sure it's accra (cod fritters).

Le Vieux Foyal is a charming restaurant-cum-jazz club that sits inside a century-old Creole house in downtown Fort-de-France, serving up equal parts ambiance and tasty French-Creole cuisine that is certainly worth a try.

At the back of the open-air market in Fort-de-France, you'll find Chez Carole, a tiny stand where a local woman named Carole makes some of the best accras on the island. You can also choose from a variety of other Creole dishes here.

For a low-key lunch right on the beach, check out Le Petibonum. This colorful bar-restaurant, which specializes in Creole dishes like Colombo (curried meat) and grilled local crawfish, is the perfect atmosphere for enjoying a drink made with local rum (ti punch is the traditional go-to) or a bottle of chilled French rose. You can also lounge on the beach, rent water sports equipment and try fly boarding. Be sure to say hello to owner and chef Guy Ferdinand, a beloved local character affectionately known as "Chef Hot Pants."

If you're keen to sample a local tipple, ti punch Martinique is famous for rhum agricole, which is made from pure sugar cane (not molasses, the typical) and has earned an AOD designation from France, a la Champagne and Cognac. Locals sip it as ti punch, served room temperature and accented with simple syrup and a squeeze of lime.

Best for a Half-Day Visit: Take the ferry from the waterfront (20 minutes each way) to visit local-friendly beaches like Anse Mitan and Anse-a-l'Ane, and soak up the St. Tropez-style ambience. The atmosphere -- replete with plentiful cafes, shops and the walkable plaza of charming Village Creole -- recalls the South of France.

Best Black-Sand Beach: Enjoy volcanically produced black sand at the beaches of La Raisinier in Le Carbet, a 40-minute ride or drive from Fort-de-France. Look around and you'll see Mont Pelee towering above in the distance. The beach is long and winding, bumping up against the coastal road, which can be busy at times. There are virtually no amenities.

Take home rum or banana jam for the foodie in your life, or snag clothing, bags and housewares made from brightly colored madras fabric for authentic local gifts.

For artisan gifts, Village de la Poterie has been in operation since 1783, making it the oldest continuously operating factory in France. Today the historic factory still makes clay bricks, and multiple artisans practice crafts from soapmaking to pottery in small Creole cottages throughout the property. Make an afternoon of shopping, along with lunch at waterside or snacks at the onsite patisserie. (Trois-Islets, open weekdays, 7:30 a.m. to 4 p.m., Saturdays, 8 a.m. to 11 a.m.; 596 68 52 45)

Best for a Half-Day Visit: Anse-Mitan and Anse-a-l'Ane in Pointe du Bout offer a relaxed atmosphere, and in town you'll find lots of cafes and shops if you tire of sand and sun.

Best for Naturists: Les Salines in Sainte-Anne, on the island's southern tip (rental car or taxi ride required), is great for people-watching. Nearby Pointe Marin is also gorgeous and attracts lots of locals.

Best Black-Sand Beach: Enjoy volcanically produced black sand at the beaches of La Raisinier in Le Carbet, a 40-minute ride or drive from Fort-de-France. Look around and you'll see Mt. Pelee towering above in the distance. The beach is long and winding, bumping up against the coastal road, which can be busy at times. There are virtually no amenities.

Fort Saint Louis: Martinique's capital city is marked by the hilltop Fort Saint Louis, which was established in 1638 and has undergone multiple expansions since then. It's been back in service as a French naval base since 2001 so public access is limited, but you can do a guided tour of some of the older sections, learning its history and enjoying gorgeous bay views from atop the outer walls. You'll need to purchase tickets from the kiosk in La Savane park.

Downtown Fort-de-France: The capital city is highlighted by the 12-acre La Savane park, adjacent to the downtown shopping area. Don't miss the statue of Napoleon's Empress Josephine, which was vandalized in 1991, leaving her eerily headless with one hand chopped off and red paint streaks representing blood around her neck. The culprits were never found, and local officials decided to leave the statue without a head. (Rue de la Liberte)

Cathedrale Saint-Louis: At Place Monseigneur Romero, you'll find Cathedrale Saint-Louis (at Rue Schoelcher), also designed by Henri Picq and erected in 1895 on the site of six previous churches destroyed by fire or natural disasters. The plaza has an outpost of France's Galeries Lafayette department store, and smaller boutiques selling everything from household items to French and local fashion extend down neighboring streets including Rue Victor-Hugo, Rue de la Republique and Place Monsignor Romero. The big duty-free department store is Roger Albert (Rue Victor-Hugo 7-9), which carries all manner of French merchandise from jewelry to cosmetics.

Saint-Pierre: Located on Martinique's northwest coast, the island's original settlement was founded in 1635 and remained a flourishing city until nearby volcano Mont Pelee erupted in 1902, killing all 30,000 residents (save for the jail's only prisoner, who was the disaster's lone survivor). The town was rebuilt but never again served as the central city. In addition to the charming waterfront (lots of cafes), you'll find black-sand beaches and the stone remnants of the town's main theater and jail. To get more perspective on the eruption, check out the small Musee Volcanologique (Volcano Museum). (Rue Victor-Hugo)

Habitation Clement: Part art gallery, part museum and part tasting room, this plantation house and distillery in Le Francois offers history alongside well-curated works of contemporary art from France and the Caribbean. The still-working distillery has been producing rhum agricole for more than 125 years, and you can taste and purchase the bounty in the lively tasting room. (Le Francois; +596-596-54-7551; open daily, 9 a.m. to 6:30 p.m.)

Hit the Galleria: The Galleria is the island's largest mall. It's fun for its foreign feel; you'll see outposts of French boutiques along with an outpost of Galerie Lafeyette. The massive Hyper U supermarket is stocked with both European and local foodstuffs, and is a great place to buy French wines. (Acajou, Le Lamentin 97232; +596-596-50-6663; open Monday to Saturday, 9 a.m. to 8 p.m.)

Balata Gardens: Set in the highlands just north of Fort-de-France, this private botanical enclave features striking bromeliads, heliconia and other tropical plants, along with 300 types of palm trees. Even those not into gardens will enjoy the canopy walk, along a swinging plank walkway strung amid giant mahogany trees. (Route de Balata, 97234 Fort-de-France; +596-596-64-4873; open daily, 9 a.m. to 6 p.m.)

Hire a Private Boat: Venture from Fort-de-France to the marina in Trois-Ilets via the ferry at the Pointe Simon cruise terminal. The ride will take about 20 minutes, and once there, you'll find a number of private boat owners who will take you out swimming, snorkeling or sightseeing, for a fee. One of the top snorkel spots is the bat cave near Anse DuFour, accessible only by boat.