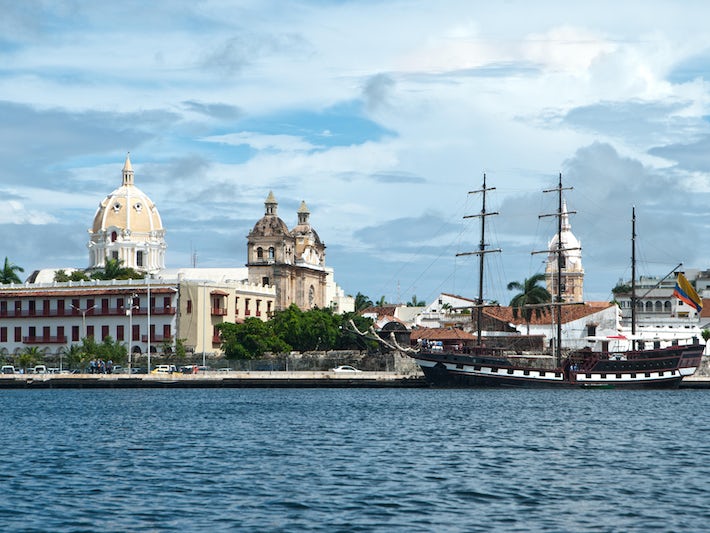 Popular Things to Do in Cartagena (Colombia)

Cartagena, Colombia, is an old and culturally rich city with much for cruisers to see and do. The city is large, so if you're short on time, consider booking a shore excursion to see some of its more significant sights. History buffs will enjoy exploring Cartagena's complicated past at the old forts and churches, as well as at some of its museums like Museo del Oro Zenu and the ChocoMuseo. There's even an old monastery. Water-lovers can partake in excellent diving and snorkeling, and more adventurous types can venture out further on an excursion to take a volcanic mud bath.

Cartagena is hot year-round, with very little variance beyond changes in humidity. Most people visit during the winter and spring months, when temps are just a bit cooler. Spanish is the official language, though some locals who work in the tourism industry might speak English as well. Currency is the Colombian peso, but many if not all businesses will also accept U.S. dollars.

Find Things to Do in Cartagena (Colombia) on Viator

Food and Drink in Cartagena (Colombia)

All things are possible in Cartagena, from expensive dining at a five-star restaurant to a tasty, freshly cooked snack from an Old Town street vendor. On our day there, the bold Australian with whom we'd shared a taxi spent $2 on a plateful of butifarras -- small barbecue-flavored meatballs. The equally adventurous will find that the street vendors of old Cartagena offer many other local delicacies, including bunuelos (cheese balls) and arepas de huevo (fried dough balls with eggs inside).

For a sit-down lunch, Old Town offers many outstanding restaurants (open from 11 a.m. until 3 p.m.) serving everything from Spanish and Italian to French and Creole specialties at reasonable prices. Your best bet is simply to stroll around, eye a few menus, and see what looks good.

Fogon Costeno: Enjoy a selection of tapas (a perfectly substantial lunch in the midday heat), washed down with well-chilled local beer, at a table overlooking the lively street. The decor is quite appealing with warm ochre-painted walls, fresh white tablecloths and a vast array of local art displayed on the walls. (Calle de la Iglesia 35-38)

Parrilla Argentina Quebracho: The focus there is on Argentine specialties. Try the roast suckling pig if you dare, or play it safe with a nice steak. (Calle de Baloco 2-69)

Carmen: For a bit of splurge, check out Carmen, which specializes in upscale cuisine that features lots of fish and seafood. It's got a ridiculously trendy atmosphere, offering both indoor and outdoor dining areas. (Calle de Cuartel 36-77; open for lunch from noon to 3 p.m. daily)

El Boliche Cebicheria: If you're craving ceviche, this is the place to be. Served in a fashionable atmosphere on a side street in the colonial San Diego neighborhood, the food's gorgeous preparation is as astounding as its taste. (Calle Cochera del Hobo 38-17)

Aguardiente, a type of sugarcane liquor, is Colombia's most well-known drink, and it usually comes in shot form. For a more Caribbean experience, try a drink made with Colombian rum, or -- if it's an unbearably hot day -- go with a bottle of Club Colombia beer. Natural coconut water is also popular for nonalcoholic refreshment. Look for vendors selling whole coconuts, which will be cut open for you with a knife so you can drink from them with straws.

Most Convenient Beach: Closest to port, you'll find La Boquilla, which lies about 5 miles north of Cartagena and is easily reached by taxi. A 10-minute cab ride beyond Boquilla is Manzanillo Beach. Both are well maintained each night by large tractors pulling sand rakes.

Prettiest Beach: White-sanded Playa Blanca lies about 14 miles south of Old Town and is generally reachable by bus or boat. Tickets for both are sold in Cartagena's main market, Mercado Bazurto, but departures are early (around 9:30 a.m.), so it's impractical for cruisers to get there unless it's by taxi or on a ship's tour.

Best Snorkeling Beach: There are also fine beaches and good snorkeling in the Rosario Islands, 27 of which lie in a chain about 19 miles south of Cartagena. Most cruise ships will run beach tours there; cruisers can also find local water taxis or organized private tours to take them to the islands. It's worth considering if you want a scenic boat ride and a hassle-free day.

Plaza de Bolivar: If this is your first visit and time is at a premium, it's the heart of the Old Town -- the prettiest part of old colonial Cartagena -- that you'll want to see. Go through the second gate and head left toward Plaza de Bolivar. You'll hear the tinkling fountains in this lovely little park before you get there, and you'll know you're in the right place when a gigantic bronze statue of South America's liberator, Simon de Bolivar, rises above the treetops.

Getsemani: Between Old Town's first main gate and its second, you'll find yourself in an outer area called Getsemani, which circles the Old Town and is home to lively, low-cost cafes, shops and bars.

Museo del Oro y Arqueologia: At one corner of the square is the Museo del Oro y Arqueologia or gold museum (free admission) and a jewelry store heavily promoted by sellers who rove outside trying to usher in customers. If shopping's your thing, this is a good place to bargain for rubies, emeralds and gold. Also worth seeing is Cartagena's 16th-century cathedral, which lies nearby and was once bombarded by Sir Francis Drake.

El Centro and San Diego: A simple stroll through the narrow streets of the two Old Town districts of El Centro and San Diego is a pleasure in itself. Cartagena is full of colonial churches, monasteries and palaces, and even its ordinary houses are a delight, with wrought iron balconies crammed with pots of vivid geraniums and cascading with rich red and purple bougainvillea.

Las Murallas: If it's not too hot, a stroll around Las Murallas, Old Town's dense walls, will reveal striking sea views. If you prefer some shade, enjoy the tranquil dappled courtyard of the 17th-century Convento de San Pedro Claver, which lies in the street of the same name. Its small museum charges a nominal fee to enter. Next door, the Iglesia de San Pedro Claver has a fine Italian marble altar.

Palacio de la Inquisicion: If history, atmosphere and the darker side of human nature are of interest to you, head to Cartagena's most remarkable attraction, the Palacio de la Inquisicion (Plaza de Bolivar, free admission). This wonderfully spooky museum will certainly cast a chill over the sunniest Caribbean afternoon. Just inside the door lurks a figure swathed in black, topped off with a pointed executioner's hood. The main exhibition room contains pillories, a rack and a variety of rusting torture implements so bizarre that their use almost defies the imagination. Outside, a sunny, tree-lined courtyard contains a gallows and a chopping block, and other small exhibits show the type of paraphernalia involved in witchcraft. If you see one thing during your stay in Cartagena, make sure this is it, but be sure to allow yourself about an hour to go through it all.

Castillo de San Felipe de Barajas: The entire Old Town is one giant fortress with still more fortifications outside its gates. The most notable exterior fortress is the Castillo de San Felipe de Barajas, which was first called for in 1533. Construction started in 1639, and it took 150 years to complete. When it was finished, the fortress proved completely impregnable, to the chagrin of various marauding hordes. You'll have fun roving the battlements and exploring the warren of underground tunnels, which were designed to amplify the faintest footfall so that enemies could not creep through. Tip: This is not the place to wear steel-tipped stilettos.

Seaside Area: To the south of the walled Old Town is an L-shaped peninsula broken into three districts -- Castillo Grande, El Laguito and Bocagrande -- that make up the "seaside resort" of Cartagena. Filled with high-quality hotels, bars, shops and restaurants, this area is a magnet for vacationing Colombians and international tourists. Scuba enthusiasts can get equipment and tours at a number of dive shops in Bocagrande; book in advance to be sure you'll have plenty of time to explore the underwater attractions. If you don't mind looking like a tourist, take a horse-drawn carriage ride. They run along the waterfront from Bocagrande to Old Town.