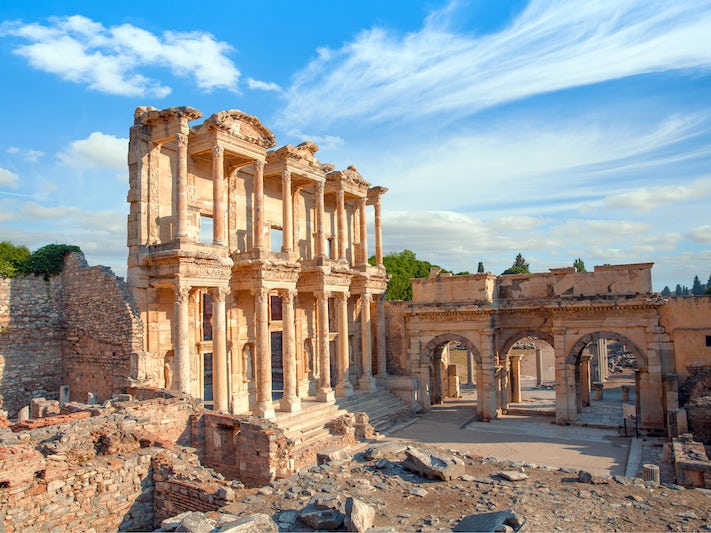 Find Things to Do in Izmir on Viator

Popular Things to Do in Izmir

Food and Drink in Izmir

If you're heading off on an excursion, as most cruise travelers will be, a lunch or snack will be part of the experience. If not, there are lots of appealing options, particularly seafood restaurants, lining Birinci Kordon, the main waterfront boulevard. Look for one that's busy, and be seated. The Kibris Sehitleri Caddesi traffic-free shopping street in Alsancak is another good place to find restaurants, and the food court on Konak Pier is another place for lunch or a snack.

For a traditional experience, visit a lokanta, a simple type of restaurant where customers select from cooked dishes on display. Meals are cheap and helpings are invariably large. Kebapci serve lamb kebabs while a pideci serves the Turkish equivalent of pizza, usually topped with minced lamb. If you prefer to stand for a full meal, you're covered. During summer months there are numerous street vendors selling mussels, an Izmiri specialty.

Mutton, lamb, beef, chicken and fish dishes are featured on menus, but pork is not served in a Muslim restaurant. Meze, a selection of dishes on small plates, is a great way to sample the local cuisine if you're not sure what to order and a fun way to share a meal with a few people. It's particularly popular at lunchtime and will include dishes such as the chickpea dip hummus, stuffed vine leaves, sardines, cheese, salad, vegetables and pickles. Make sure you leave room for lokma, Izmir's celebrated sweet pastry.

Sisim, down by Pasaport (the ferry pier) and just north of Cumhuriyet Meydani, is great for people watching and gazing out at a teeming harbor. It's also very affordable. You can grab a meal of fish and meat pie plus a drink for around $15. (Ataturk Caddesi 174A)

Farther along the waterfront is one of the most popular establishments with both locals and tourists alike. Run by the same family for 30 years, Deniz serves up locally caught seafood specialities like bream and red mullet, cooked to perfection. (Ataturk Caddesi 188B)

Ephesus is the best-preserved ancient city in the Eastern Mediterranean and is a magical place that enthralls even those who normally find rubbernecking around ruins a bore. The Virgin Mary is believed to have visited here between 37 and 45 A.D., and the fabulous Temple of Artemis, which Alexander the Great visited during its construction in 334 B.C., was one of the seven wonders of the ancient world. Located about an hour's drive from Izmir, Ephesus at one time was the most important commercial center in the region. The city was built on the river Cayster, a strategic trade route to Anatolia. The ruins range from a theater and library to private terrace houses with magnificent mosaics and frescoes. Prepare carefully for a trip to Ephesus -- the site gets very crowded and extremely hot in the summer months, so take plenty of water, sunscreen and head covers. (Plenty of enterprising stallholders near the entrance sell drinks and inexpensive hats.) Also, make sure you have some change because you must pay to use the public toilets. Restaurants are located near the site, and full-day cruise tours will include lunch. If you're not visiting Ephesus via a shore excursion, your taxi can drop you at one end and, by prior arrangement, pick you up at the other. (Open daily 8 a.m. to 7 p.m. in summer and until 5 p.m. in winter.)

Often included in tours to Ephesus and definitely not to be missed is a visit to the House of the Virgin Mary, located atop Nightingale Mountain (Bulbul). It's a humble, one-story brick house that, according to myth, is where the virgin spent her last years. Discovered in 1880 by a German nun with a vision, the house has been visited by countless folks on pilgrimages, including two popes.

For the diehard shopper, head straight to the Kemeralti Bazaar just east of the Konak clock tower (where the clock hasn't stopped ticking since the tower was built in 1901) for some hard-core haggling. You'll find a predominance of designer attire -- be prepared to endure a cacophony of "Guess, Boss, Levis, very cheap" -- but also leather goods, antiques, produce, household goods, spices and more. The bazaar is one of the largest in Turkey, and getting lost in the labyrinth of narrow streets is all part of the fun!

Just beyond the bazaar is Hisar Mosque, the largest and oldest in Izmir. Built in the 16th century and restored in the 19th century, it contains fine examples of Ottoman decorative art and is open to visitors except during times of prayer.

Culture vultures won't want to miss the Archaeology Museum south of Konak Square in Bahri Baba Park. It contains an extensive collection of artifacts found in nearby ancient cities such as Miletus and Ephesus and the Agora in Izmir. Of particular interest are Roman mosaics, classical statues of Poseidon and Artemis and the head from a huge statue of the emperor Domitian. (Halil Rifat Pasa Caddesi 4; open Tuesday to Sunday 9 a.m. to noon and 1 p.m. to 5 p.m.)

Try an excursion to ancient Pergamum (alternatively called Pergamon) and Asclepion. Pergamum was a Greek city, well known as a major intellectual center, which boasted one of the most impressive libraries in antiquity. The site contains the remains of a 10,000-seat theater, a marketplace, palaces, temples and a Roman bath complex. Nearby Asclepion, always included in any excursion to Pergamum, was once a huge sanctuary devoted to the god of healing, a massive spa of sorts from olden times. Pergamum and Asclepion are reachable from Izmir but not Kusadasi.

Though Izmir probably contains bountiful ruins, most are yet to be found -- with the major exception being the Agora. When in use, the marketplace was the largest in Asia Minor and one of the most impressive found in the Greek/Roman empires. Now, little remains but the foundation built in the 1st century B.C. and the western colonnade, a row of 14 massive Corinthian columns that give a dramatic impression of size. There are numerous pieces of statues and columns strewn about the open-air museum. Major excavation works, part of an ongoing reconstruction project, continue to reveal new treasures. (Open daily 8:30 a.m. to noon and 1 p.m. to 5 p.m.)

After the Archaeology Museum, the city's other leading historical showcase is the neighboring Ethnography Museum in Bahri Baba Park. Housed in an old Ottoman hospital, the exhibits provide an engaging slice of social history with reconstructions of a pharmacy, bridal chamber, felt-making workshop and 19th-century living room, along with displays of carpets and weapons. (Halil Rifat Pasa Caddesi 3; open Tuesday to Sunday 9 a.m. to noon and 1 p.m. to 5 p.m.)

Anyone interested in the emergence of Turkey as an independent nation should visit the Ataturk Museum. This special-interest museum is housed in a building originally owned by a Greek merchant who was forced to flee during the Greco-Turkish War of 1919 to 1922. Four years later, the authorities gave the house to Mustafa Kemal Ataturk, the founder of the Turkish Republic and its first president. His private quarters are furnished in the style of the period and contain some of his personal possessions. (Ataturk Avenue 24; open Tuesday to Sunday 9 a.m. to 5 p.m.)