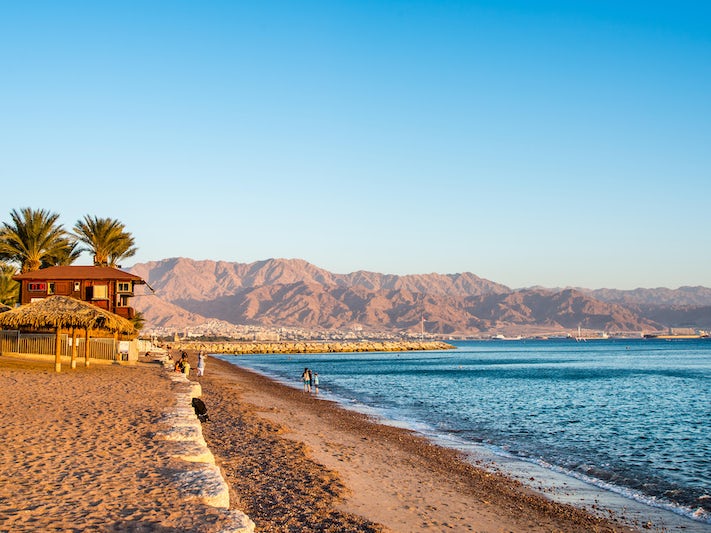 Find Things to Do in Aqaba (Petra) on Viator

Popular Things to Do in Aqaba (Petra)

Food and Drink in Aqaba (Petra)

Our favorite thing to eat here is mezze, which can consist of up to a dozen plates including humus, mutabbel (eggplant with sesame paste), labaneh (strained thick yogurt) and tabbuleh. For a traditional Jordanian meal, try mansaf, a hearty mix of lamb, rice and pine nuts. Tips of 10 percent are expected at the better restaurants, but some may add it automatically as a service charge.

If the heat leaves you parched, approach the nearest juice stall for fresh-squeezed juice from oranges or a mix of tropical fruits, or order one of the popular herbal teas at a cafe. Coffee drinking is part of Arab hospitality, and the coffee is of the Turkish variety, which is black and thick and can be ordered sweetened or unsweetened.

Editor's note: There is not much in the way of eating options in Wadi Rum other than a few shops in the village selling drinks and snacks.

Best for local eats: For some Arabic fast food, Al-Mohandes (3rd Commercial Area, open daily) serves falafel sandwiches and shawarma (slices of lamb or chicken cooked on a vertical spit) and is a cheerful cafe popular with locals -- look for men in the corner playing backgammon. If there are no seats downstairs, leave your order at the counter and head upstairs. A meal here is cheap -- under $5.

Best for outdoor dining: For views of the main city square, dine on the outdoor terrace at Ali Baba Restaurant, a nice restaurant serving mezze, grilled seafood and kebabs (downtown at Princess Haya Circle, open daily 8 a.m. - 11 p.m.). The grilled garlic chicken is especially good. Entrees are $5 to $15. Wine and beer are available.

Best for seafood: In the hotel area near the Golden Tulip hotel, the ship-shaped, nautical-themed Captain's Restaurant (Al Nahda Street, open daily 9 a.m. - 11 p.m.) serves fish, BBQ and steak. Sit outside under a canopy of colorful cloth. Main courses are $4 - $11, set dinners under $15. No alcohol is served.

Best for waterfront views: The Royal Yacht Club (on the waterfront near the yacht marina, open noon to 11:30 p.m., www.romero-jordan.com) has a restaurant offering Italian cuisine and views of the marina (you can even see Eilat across the Gulf). The menu includes pizza from a wood-burning oven, seafood, Arab specialties and big dinner salads. Stop by the terrace for daily live music or head to the Skippers Bar Lounge, located above the restaurant, for a drink. Main courses are $8.50 - $17.

Best at Petra: Right at the entrance to Ancient Petra, the Movenpick Resort Petra (lunch served from noon to 4 p.m.) is your best lunch bet. The Al Saraya Restaurant offers international cuisine with both buffet and a la carte selections (light meals are served at the Pool Terrace, too). Keep in mind it's a considerable walk (about a half hour) from the ancient ruins. If you're at the ruins and your stomach is growling, you'll have to go with light snacks and drinks served at the souvenir stands.

Visitors can use the beach at the Movenpick Resort on King Hussein Street for a fee of $23 weekdays and $27 weekends. In addition, the entrance fee gives you access to three pools and a free drink voucher. The free public beach in Aqaba Marine Park, on South Beach about 7.5 miles from the city, is another good bet, offering showers and umbrellas for rent. If you venture here make sure you prearrange a time for your taxi to bring you back to the ship.

Petra: Jordan's key attraction is the magnificent remains of a 2,200-year-old city originally created by the Nabataeans, an Arab people who carved elaborate palaces, temples, tombs and storerooms out of solid rock. It's right up there with Egypt's pyramids as a must-see destination in the Middle East. The Romans conquered the city in 106 A.D. and made it part of the Roman province of Arabia Petraea. The city was important as a trading center between Damascus and Arabia and flourished in the 2nd and 3rd centuries. It was conquered by the Muslims in the 7th century and by the Crusaders in the 12th century and eventually fell to ruins. The site was rediscovered by a Swiss explorer in 1812.

Visitors today reach the site as in ancient times via a narrow, half-mile gorge, which eventually leads to a sunlit opening and the jaw-dropping view of the Al Khazneh treasury building. Look familiar? That's because the temple-like structure, carved out of rose-colored sandstone, appeared in "Indiana Jones and the Last Crusade." Continue around the corner and the city is laid out before you, complete with the remains of grand boulevards, tombs, palaces and a semi-circular Roman theater that once seated 3,000. Visitors can explore Petra daily from 6 a.m. to 9 p.m.

Be aware that touring Petra involves a lot of walking, and even with an expert guide you can't see everything in one day. If you're worried about wearing yourself out, you can skip part of the hike by traveling through the gorge on horseback or by horse and buggy. Alternately, if you're really fit, you can climb to two of the highest points in the city -- the High Place of Sacrifice and the Al-Deir Monastery. The 800-step climb to the Monastery is worth it for the imposing facade and cliff-top views.

Shopping tip: Skip the shops named Titanic and Indiana Jones at the entrance to Petra, but once past the treasury, make a stop at the Why Not Shop. Check out the case of jewelry made from amazingly luminous rocks found in Petra. The necklaces are crafted by Bedouin women as part of an educational project started by Queen Noor (the U.S.-born wife of the late King Hussein).

Wadi Rum: Made famous by T.E. Lawrence in his memoir "The Seven Pillars of Wisdom," the desert valley of Wadi Rum is full of extraordinary scenery. We're talking towering rock structures over flat desert and areas that could easily be a lunar landscape. Lawrence described the area as "vast, echoing and god-like." At any time you can imagine Peter O'Toole in white headdress coming into view on a camel -- not surprisingly, scenes from "Lawrence of Arabia" were filmed here. But the area is also historically significant. This is where Lawrence and his Bedouin allies staged their surprise attack on the Turks in Aqaba in 1917.

The most popular way to explore the rock formations, natural stone bridges, canyons, red sand dunes, rock inscriptions (left by the Nabataeans, among others) and amazing views of Wadi Rum is on a 4 x 4 tour. You can arrange a tour through your ship or at the visitor's center, which is about four miles from Wadi Rum. The visitor center charges $35 to $65 for its 4 x 4 tours, which range from two hours to a full day. Be aware that Wadi Rum is a protected area, so you cannot just show up and drive around by yourself.

For those who prefer to explore on foot, a two-and-a-half-mile hiking route takes you past the Seven Pillars of Wisdom Mountain and Makharas Canyon. You will need to check in at the visitor center before embarking on your trek. Guides can be hired to take you on longer hikes. The visitor center can also arrange camel tours led by Bedouin guides.

Aqaba Fort/Aqaba Castle: The Aqaba Castle seen in the movie "Lawrence of Arabia" is actually in southern Spain, but this one is noteworthy nonetheless. The waterfront fort, square in design and with semicircular towers, originated with the Crusaders in the 14th century and was expanded by the Mamluks (from Central Asia and the Caucasus) in the early 16th century. It was later occupied by the Ottomans until WWI, when it was destroyed by British-fired shells. What you see today is the rebuilt version. Open daily 8 a.m. to 7 p.m., May - September; Saturday - Thursday 8 a.m. - 4 p.m. and Friday 10 a.m. - 3 p.m., October - April.

Aqaba Archaeological Museum: Next door, the small Aqaba Archaeological Museum (open the same hours as the fort) is housed in the former residence of Sharif Hussein bin Ali, great grandfather of King Abdullah II, the country's current leader. During the Arab Revolt (1916 - 1917), the Ottoman forces were driven from the city by the Arab Army of Sharif Hussein, with the help of his ally, T.E. Lawrence, known as Lawrence of Arabia. The house was Sharif Hussein's residence for six years following the war. The museum displays an important collection of Islamic items dating from the 7th to 12th centuries, including pottery and coins. Among the exhibits is a Kufic inscription of "Ayat al-Kursi" from the Holy Quran. A must-do photo, the giant flag flying nearby on the waterfront is not the Jordanian flag, as some assume, but the flag from the Arab Revolt.

Diving:The undersea world of Aqaba is full of beautiful reefs, an incredible variety of fish and centuries-old coral, not to mention sea turtles and dolphins. The prime diving spots are south of the city in the Aqaba Marine Park, a 4.3-mile area on the southern coast of the Gulf that houses some 500 species of fish and 300 kinds of soft coral (among the treats are rare archelia, a black, tree-like specimen found at great depths and first discovered by the late King Hussein himself). There are many operators here, including Aqaba Adventure Divers (South Beach, 962 320 190 60), that offer free transportation from downtown. You should also be able to arrange dives through your ship's tour desk. Dives typically cost $26 to $37.

Shopping: Aqaba is a Duty-Free Zone, so deals abound on electronics, perfume, alcohol and jewelry. Most shops open at 9 or 10 a.m. and don't close until 11 p.m. The Jerusalem Bazaar, near the post office on Yarmuk Street, is the place to haggle for Bedouin jewelry, coral items, rugs, soap and spices. The Queen Noor Al-Hussein Foundation, opposite the Aqaba Archeological Museum, sells crafts from village development projects around the country, including clothing, Bedouin jewelry, carpets, pottery and glassware. Aqaba Gateway is the modern mall, opened in 2004; it's a large retail and entertainment complex with 33 stores as well as restaurants and cafes.

Archeological digs: If you choose to wander around town, don't miss the archeological digs. The excavation of what is believed to be the world's oldest church (estimates date it to the late 3rd century) is east of Istiklal Street. And along the main waterfront road near the hotel district, excavation continues on the remains of Ayla, the walled city that dates to the early days of the Islamic era (parts were unearthed in the mid-1980's by an American-Jordanian archeological team).