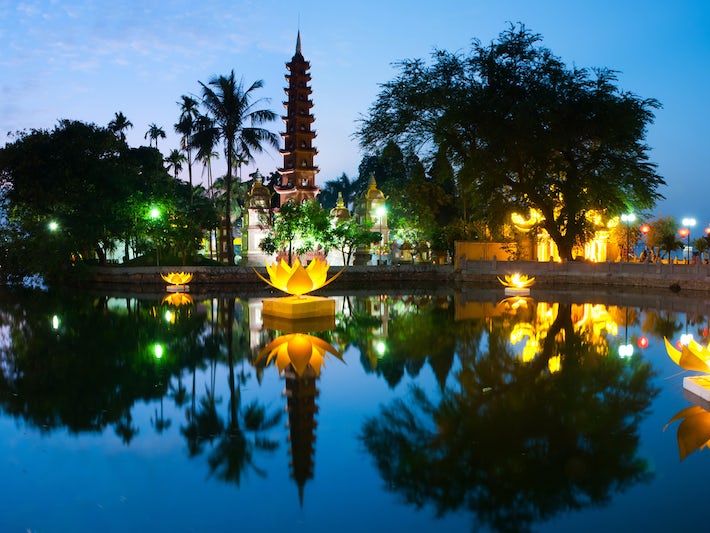 Find Things to Do in Hanoi on Viator

Popular Things to Do in Hanoi

Food and Drink in Hanoi

In Vietnam, like the rest of Asia, rice and noodles are food staples. As a result of the French colonial period's influence, the cuisine is admired by food lovers around the world. Fresh herbs and hot chilies are found in many dishes including their equivalent of fast food, pho soup. Pho (pronounced fuh) is flavored with fresh vegetables and savory stock, and is a breakfast, lunch and dinner favorite. Vietnam's long ocean coast and abundant rivers and lakes are sources for fish, crab, shrimp and squid commonly found on menus. Nuoc mam, a pungent fermented fish sauce, is the preferred condiment, found on almost every dining table in the country.

Hidden away in the Old Quarter, Green Tangerine offers French-Vietnamese cuisine in an elegant, serene setting.. You'll find a colorful mix of travelers and well-heeled locals at this welcoming dining spot -- the sign of a successful restaurant. (48 Hang Be; 04/825-1286; open 9 a.m. to 11 p.m. daily)

The Gourmet Corner restaurant is located on the 12th floor of the Elegance Diamond hotel, overlooking Hoan Kiem Lake, the Red River and the Hanoi skyline. The restaurant also offers outdoor terrace dining area for warm evenings. The menu includes authentic Vietnamese food, as well as Western-style cuisine including steaks and pasta. The food is excellent, the service is friendly and the prices are reasonable. (32 Lo Su Street; Old Quarter, Hoan Kiem District; open daily for breakfast, lunch and dinner)

The Essence restaurant is located in heart of the Old Quarter in the Essence Hanoi hotel and offers authentic Vietnamese and Western dishes. Specialties include deep fried spring rolls and grilled bamboo beef. Dinner for two costs $20-$30. The staff is extremely helpful, and Wi-Fi is available at no charge. (22 Ta Hien Street, Hoan Kiem; +84 4 3935 2485, ext. 105; open daily for lunch and dinner)

For a change-of-pace from local cuisine, try the Moose & Roo Pub & Grill. Food is a bit more expensive than local Vietnamese spots, but well worth it if you crave an American-styled pulled pork sandwich, fish taco or cheeseburger. The restaurant boasts a great selection of foreign and domestic beers. Service is professional and friendly. (42b Ma May; +84 4 3200 1289; open for breakfast, lunch and dinner).

In Halong Bay City: Unless you're on an overnight junk cruise, Halong Bay isn't known for its dining scene, especially for visitors. It's probably best to return to the ship for a nice meal. New resort hotels are being built, which might improve dining options.

The Ho Chi Minh Mausoleum is a concrete structure modeled on Lenin's tomb in Moscow. "Uncle Ho," the Communist revolutionary who began the revolution in 1949 and died in 1969 (six years before unified Communist Vietnam was established), is embalmed there and can be viewed under glass in his khaki suit. View the change of the guards around noon. (Ba Dinh Square; open 8 a.m. to 11 a.m. Tuesday to Thursday and Saturday; free admission)

Nearby is the pretty, yellow French colonial Presidential Palace, built in 1901 for the French governor. If you want to tour the Ho Chi Minh Residence, head around back. The revolutionary, preferring a simpler life, chose to reside in a modest structure on stilts behind the palace. Beautiful grounds surround both residences. (Behind the Presidential Palace, Ba Dinh Square; open 8 a.m. to 11 a.m. and 1:30 p.m. to 4:30 p.m. Tuesday to Sunday; Tickets $1.20)

Around the corner, the Ho Chi Minh Museum (3 Ngo Ha; open 8 .am. to noon Monday and Friday, from 8 a.m. to 4:30 p.m. all other days; tickets $1.20 and about $4 with English speaking guide) gives details of the Communist revolutionary's life and displays his personal items. A good photo op nearby is the One-Pillar Pagoda (open 8 a.m. to 5 p.m. daily; free admission), a reproduction of a shrine built in 1049 perched on a concrete pillar in a scenic lake. A prayer there is said to bring fertility and good health.

The Temple of Literature dates to 1070 and is dedicated to the Chinese philosopher Confucius. The beautiful buildings and temples, set around four courtyards, were bombed during the war but have been restored. (Quoc Tu Giam Street; open 8 a.m. to 5 p.m. daily; small admission fee)

Hanoi's crazy, hectic Old Quarter is a must-do stop for souvenir shopping (in a little shop, we found a silk purse for $6 that we paid $60 for in Boston) and to view the market scene.

If your ship is in port for two or more days, consider an overnight Halong Bay cruise on a deluxe Vietnamese junk. It's an entirely different experience from the full- and half-day tours that compete with dozens of other junks that visit the same islands and caves at the same time. The overnight junks are beautifully detailed and crafted with polished teak or mahogany. The cabins are a bit small, but each has its own bathroom, and the beds are full-size and comfortable. Most of these two- or three-story junks have more than a dozen cabins and serve delicious multicourse Vietnamese meals in nicely appointed dining rooms. A full bar with beer and a decent selection of affordable ($15-$40) wines is available.

One of the biggest complaints from day-boat junk cruisers is the large number of boats cruising the bay in the same areas and the even more crowded beaches and cave tours. The overnight junk companies that own these floating hotels have contracts with the government to cruise in waters the day boats can't. They cruise in out-of-the-way areas of Halong Bay restricted to their junks and the fisherman and families who live on the bay in floating villages. These companies also have permits for exclusive use of specific islands with private beaches offering cave exploring, kayaking, and swimming. But what really makes these trips special is the magical twilight time, when you're anchored in a cove among mist-shrouded islands with only the sounds of birds and the ice cubes clinking in your cocktail glass.

Interested in military history? Hire a cab and head about 8.5 miles south to the city's outskirts and the Ho Chi Minh Trail Museum. The facility details the efforts to supply the North Vietnamese front lines by bicycle, truck and manpower. You can view three floors of photographs and many pieces of weaponry and war machinery. Be aware, traffic heading south can be a nightmare, so it can take an hour or more to get there. (3 Ngoc Ha Street)

Hoan Kiem Lake, in the heart of Hanoi, is the city's Central Park and a peaceful place to stroll, jog or observe local life. Explore the stunning pagodas and temples, take a photo op at the long, Chinese-style Bridge of the Rising Sun, ride a swan boat or simply grab a snack at one of the small cafes and unwind. In the morning, residents go there to practice tai chi and martial arts; later in the day, elderly men gather to play chess. Giant turtles inhabit the lake, so be on the lookout.