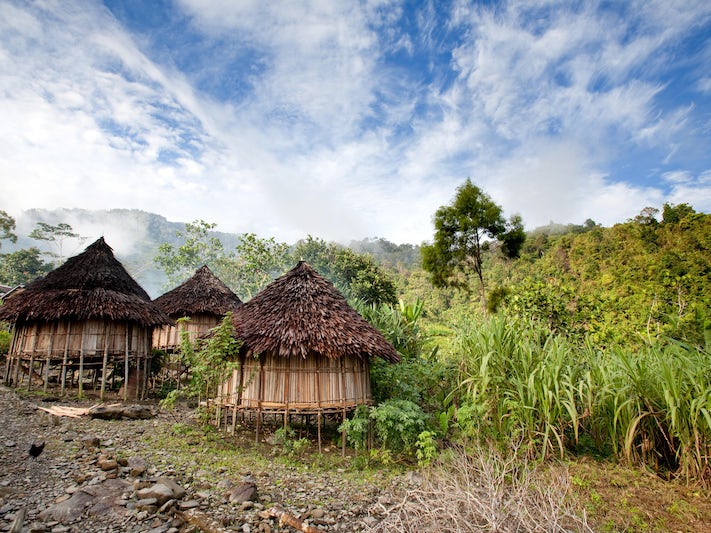 Find Things to Do in Madang on Viator

Popular Things to Do in Madang

Food and Drink in Madang

Residents eat garden-grown vegetables and fresh fish and other sources of protein in coconut milk. Fishermen also supply fresh fish to hotels and restaurants, which serve them in Western-style dishes with locally grown vegetables or supplies that are flown in.

For a quick snack, there's a town market that sells fruits and vegetables, or you can take the five-minute walk from the wharf to Andersons Foodland for store-bought meals. For street food, try the Krangket Fish Market where women sell fried vegetables from their gardens and fresh fish. The markets are generally open every day except Sundays.

Along with lunch, you can often get pool privileges at the large hotels such as the Madang Resort Hotel and Madang Lodge. Or you can sample Chinese cuisine at the Ocean Restaurant and the Madang Club. You will find these next to each other on Coastwatchers Avenue.

For its relaxed atmosphere and magnificent views, our recommendation is Coasties Restaurant and Bar at the Coastwatchers Hotel, just across the road from a Madang landmark, Coastwatchers Memorial Lighthouse. The restaurant is also a good spot for dolphin sightings. The restaurant serves the usual cafe fare, with dishes such as a classic bacon, lettuce and tomato sandwich finished with homemade aioli served with homemade potato crisps; bruschetta consisting of a baguette topped with bush tomato and olive and herb salsa; or vegetarian fried rice, an Indonesian-style vegetarian fried rice topped with fried egg. You can also order a pizza.

To fully appreciate the lifestyle of many residents, visit Bilbil, a village in a lush rainforest known for creating the clay pots that once were traded up and down the coast. People live in thatched homes made from the sago palm. Many still cook outdoors over fires. Pigs and chickens, both highly valued, have the run of the place -- sadly so do dogs, which tend to be underfed and underappreciated. You'll notice that many of the villagers, including children, have teeth and tongues stained red from chewing betel nut, which has narcotic qualities. During events arranged for tourists, women and men -- including Bilbil's chief -- produce a "singsing," an exhibition of traditional songs and dances. The women, wearing grass skirts made from the highly functional sago palm, also demonstrate how they make their clay pots. There are generally a few wares for sale as well.

If you want an unusual experience, you might like the Balek Wildlife Sanctuary, home to a sulphur spring that bubbles out of a cave in a limestone escarpment. You might spot turtles and fish. While it is within hiking distance, check with your cruise line or the Madang Visitors and Cultural Bureau whether that is a wise choice at the time of your visit. The bureau may be able to recommend a guide.

The Madang Visitors and Cultural Bureau, located on Modilon Road, near Coronation Drive, has a small but informative museum that showcases PNG's rich past with a terrific collection of artefacts: carved canoe paddles, a bamboo fishing net, stone axes, spears, masks, body ornaments, clay pots, drums used to send messages from one village to another and a tribal leader's chair that once adorned a "spirit house" where young boys were initiated into manhood. There's also an exhibit about the country's existence under German rule, and, more recently, as an Australian protectorate. PNG gained independence from Australia in 1975 and operates today as a constitutional monarchy that's part of Great Britain.

Madang Resort Hotel, PNG's oldest hotel, exudes a lot of Old World glamour with stunning views of the Dallman Passage and 10 acres of lush, landscaped tropical gardens. The gated resort is often the setting for shore excursions featuring a musical and dancing pageant with dozens of participants in traditional dress. Let's just say it feels a little more like Disneyland than Bilbil. Contact the resort well in advance to check whether you can get a resort day pass to use the facilities when your ship is in port.