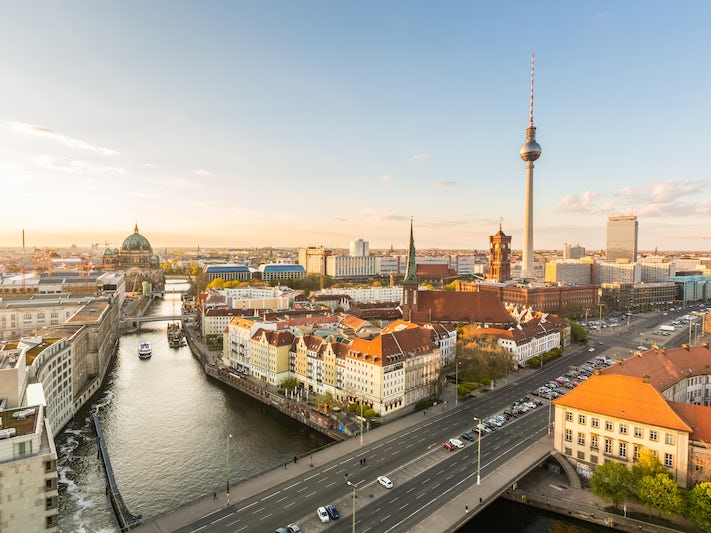 Find Things to Do in Berlin on Viator

Popular Things to Do in Berlin

Food and Drink in Berlin

For a short, one-day stay a quick lunch snack can be had throughout the city. Two of the local favorites are currywurst, a wurst sandwich with curry sauce either between a bread roll or diced and set in a paper dish, and doner kebab, sliced meat brought to Berlin by the huge Turkish immigrant population. Such outlets can be found all over the city, and the most convenient pauses in a frenetic day would be at Potsdamer Platz, Alexanderplatz and the Hauptbahnhof.

The stone arches under the Hackescher Markt S-Bahn house several restaurants, all with outdoor cafes open in good weather. Order the Wiener schnitzel at Barist -- the breaded meat will cover the entire plate. Sour Brandenburg pork with scalloped potatoes and red cabbage is another favorite.

The Nikolai Quarter facing the River Spree and southeast of Unter den Linden is a restored section of old Berlin with many restaurants, some with outdoor dining. Reinhard's is a classic German-style restaurant with dark paneling and mirrors, and very good German food. Venison medallions are wrapped in bacon and the three-part plate -- pork, steak and turkey -- comes with a different sauce for each.

Both Gendarmenmarkt and Potsdamer Platz have lots of eateries.

If you follow this suggested route, you will see most of the city's highlights, and given the time allowed, be able to duck into a few. Some visits warrant a half day, so you will want to come back again for a longer stay.

Potsdamer Platz is a good place to begin as it represents a reborn Berlin, many of the new structures are the work of Europe's most celebrated architects. Once a wasteland, with the Berlin Wall running through the center, it is again the site for company headquarters like DaimlerCity and the Sony Center. It's also a center for film and TV entertainment and boasts more than 100 shops, restaurants and bars, an amusement park and a small piece of the Berlin Wall embossed with graffiti and photographs.

Walking north, you can get briefly lost in amongst the 2,711 stelae that form a cemetery-like Holocaust Memorial and underground information center to the murdered Jews of Europe. Across Ebertstrasse is the Tiergarten, the vast urban park that stretches west from the Brandenburg Tor (Gate) to the Berlin Zoo.

Built in 1791, the triumphal gate now unites the two Berlins rather than forming part of the wall that divided the city. The gate faces Pariser Platz, the again-elegant square rimmed by handsome buildings housing the Adlon Hotel, British Embassy and the U.S. Embassy.

Continue beyond Brandenburg Tor to the Reichstag (Parliament again since 1999). Built in 1894, it burned in 1933, giving Adolf Hitler an excuse to seize power. During reconstruction, Sir Norman Foster added a glass dome, one of the city's most popular attractions. While the wonderful view reached by lift is free, the wait may extend to an hour, so unless you can be on hand when it opens at 8 a.m., you may not have enough time to pay a visit.

If you did not arrive in Berlin through the brand-new monumental Hauptbahnhof (main railway station), be sure to walk across the open parkland to have a look inside. The S-Bahn and Deutsche Bahn trains pass through the curved glass train shed at the upper level as well as at completely right angles below ground. In between are a huge range of shops, restaurants and snack concessions, as well as a city information center.

Go back to Unter den Linden along a River Spree promenade to Wilhelmstrasse, then turn right and proceed two blocks south. Follow Unter den Linden past the Russian Embassy to Friedrichstrasse and turn right again to explore the city's most stylish indoor shopping precincts at Friedrichstadt Passagen -- Galeries Lafayette and Quartier 206 and 205. Using glass, marble and wrought iron, they have a sophistication that evokes the early 20th century, despite their much more recent construction and design.

Continue south past the Stadtmitte U-Bahn station to Checkpoint Charlie, once the most famous border crossing between the American Sector and the Soviet Sector. The exhibit space, Haus am Checkpoint Charlie, tells the story of the Berlin Wall's construction and the ingenious ways East Germans tried to escape to the West via tunnels and by clinging to the underside of cars and trucks.

Returning to Unter den Linden, continue east past the Old National Library and Humbolt University (left) where Marx and Engles studied and Einstein taught. The Old Royal Library and State Opera House are on the right. The River Spree now passes under Unter den Linden as the boulevard becomes Karl-Leibknecht-Strasse and curves left. Am Zeughaus houses the German Historical Museum, while the island dividing the two river channels is the site for Berlin's largest concentration of museums, a truly splendid complex.

The four museums are Alte Nationalgalerie (Old National Gallery) for 19th-century European art, including French Impressionists; Pergamon Museum for classical, Near East and Middle Eastern (Islamic) art, including the Pergamon Altar (165 B.C.) and Ishtar Gate (6th century B.C.); Altes Museum for Egyptian, Greek and Roman art; and the recently reopened Bodes Museum for European sculpture from the Middle Ages to the 19th century. A day pass will give entry to all four, or visitors can buy tickets to each museum individually.

Backing onto the second channel, the Berliner Dom (Berlin Cathedral) looms neo-Renaissance large. Completed in 1905, it was the family church for the ruling Hohenzollerns, some of whom are buried in the crypt.

Cross the second bridge and you'll find the entrance to the DDR Museum (German Democratic Republic Museum) at the river edge promenade next to the Radisson SAS Hotel. This museum provides a claustrophobic look into the mostly drab everyday life in East Berlin before the wall was pulled down. Exhibits showcase a temperamental Trabi (mass produced car), life in concrete housing projects, household and kitchen wares, and even Stasi listening devices.

South of Karl-Leibknecht-Strasse, Nikolaiviertel (Nicholas Quarter) recreates Berlin's 13th-century founding site anchored by twin-spired Nikolaikirche (Nicholas Church), plus Marienkirche, the city's oldest church with a congregation, and the 1860 Rotes Rathaus (Red Town Hall). The cobbled streets come alive in the evening for those seeking traditional German-style restaurants plus a couple of ethnic interlopers.

Alexanderplatz, once largely a parade ground where Hitler held rallies, is now a major modern shopping center and complex transportation hub for trams, buses, and the S-Bahn and U-Bahn. The Fernsehturm (TV tower) is the dominant (and Berlin's highest) structure and, at nearly 1,200 feet, its viewing platform draws long lines.

North of Alexanderplatz, Scheunenviertel is the historic Jewish quarter with the rebuilt Neue Synagoge recalling a thriving past. The quarter is set in a bustling present of restaurants, shopping and nightlife extending to Hackesche Hofe, where restored courtyards provide intriguing alcoves of street life and shopping.

Go shopping. Prime shopping districts include the Am Gendarmenmarkt (including Galeries Lafayette) and Friedrichstadt Passagen along Friedenstrasse, south of Unter den Linden. You can also try Hackesche Hofe for courtyard boutiques three blocks north of the Berlin Cathedral; the Kurfurstendamm, a tree-lined boulevard and the main shopping street in former West Berlin; and KaWaDe department store at Tauentziensstrasse 21 (Wittenburgplatz U-Bahn), southeast of the Kaiser Wilhelm Church in former West Berlin.

Many intriguing sights and attractions are scattered well west of the Brandenburg Gate on the far side of the Tiergarten and southeast of Alexanderplatz:

The area around Kurfurstendamm was once the heart of West Berlin and it remains a vibrant shopping center. The anchor is Kaiser-Wilhelm-Gedachtniskirche (Kaiser Wilhelm Memorial Church), located at the southwest edge of the Zoological Garden (also the S-Bahn and U-Bahn station stop) for the Berlin Zoo and Aquarium. The ruined tower (circa 1895) is a reminder of World War II and the Allied bombings, while the newish octagonal tower (1961) alongside it tells the church's story.

Walk west along the Ku'damm to No. 207-208, the Story of Berlin Museum, displaying the city's history from imperial days until now. When the Nazi-era exhibits begin, you are led down a long set of stairs into the underground for an effective portrayal of Berlin from the late 1920's on. One wall shows how Hitler's handwriting deteriorated as his mental and physical health declined. There are film clips showing the Berlin Blockade in 1948-49 and after 1961, West Berliners looking across the wall into East Berlin, and respective East and West living room styles from the 1960's.

Located northwest of the Ku'damm, Schloss Charlottenburg is a complex of baroque palaces, rebuilt after WWII, that served as the home for the royal Hohenzollern rulers. Touring them takes a whole day, while the gardens may be enjoyed free of charge and are often a stop on the bus tours.

The longest section of the Berlin Wall (nearly a mile) parallels the River Spree southeast of Alexanderplatz. Take the S-Bahn to Ostbahnhof and walk right one long block to the river. Walking its remaining length, you not only see some of the murals that were painted after 1989 but can also appreciate the wall's height, which prevented East Berliners from seeing into the West. Walk to the far end and cross the handsome brick arched and turreted Oberbaum Bridge. The U-Bahn station (elevated) on the far side will provide connections back to Alexanderplatz, Unter den Linden and Potsdamer Platz.