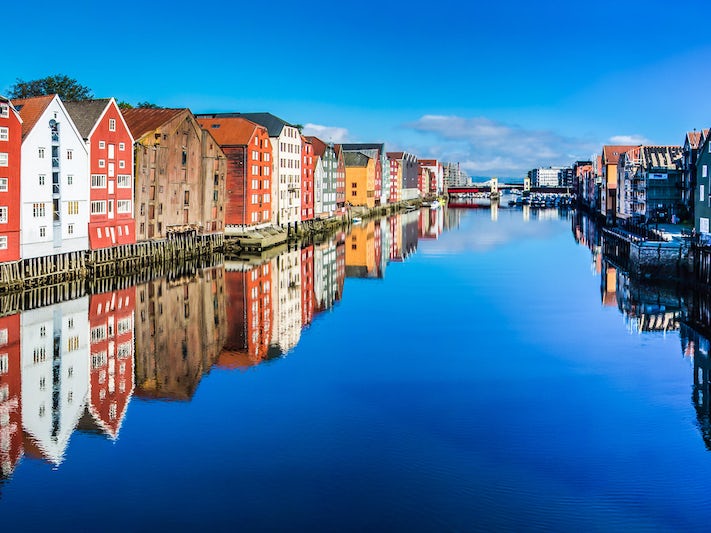 Find Things to Do in Trondheim on Viator

Popular Things to Do in Trondheim

Food and Drink in Trondheim

Norwegian fare incorporates a ton of fish; you'll find it in just about every form, from fritters and cakes to soup and sandwiches -- or just by itself. Other types of seafood are popular, too, given the country's proximity to the ocean. You'll also find some interesting staples like reindeer and whale, and if you're in the mood for a sweet treat, cakes and pastries are easy to find.

Bakklandet Skydsstation: Set in an old coaching inn, this place serves reasonably priced Norwegian standards for lunch and dinner. Try bacalao, dried salted cod in tomato sauce, and kjottkakaker, meat cakes. If you're in the mood for a snack instead of a full meal, opt for waffles with berries and cream, geitost cheese and hot chocolate. You'll also love the cozy atmosphere, featuring colorful tables, chairs and benches with whimsical pillows. (Ovre Bakklandet 33; open Monday to Friday, 11 a.m. to 1 a.m., and Saturday and Sunday, noon to 1 a.m.)

Agot Lian: This is the place to go for hand-fried fish dishes in a trendy atmosphere. Fish cakes are the specialty at Agot, and they include options like classic fish cakes; haddock with chili, leek and garlic; and haddock puree with sundried tomatoes. All cakes are made with milk and potato flour and contain nothing artificial. (Kongens gate 14 B; open Monday to Saturday, 11 a.m. to 11 p.m.)

Egon Tarnet: Located atop the Tyholt radio tower, this establishment revolves one complete turn every hour, offering spectacular views. On Sundays and Mondays, there's a pizza buffet for $20, a bargain in Norway. (Otto Nielsens vei 4, Tyholt; open Monday to Thursday 11 a.m. to 11 p.m., Friday and Saturday 10 a.m. to 11:30 p.m. and Sunday 11 a.m. to 10 p.m.)

Austmann Bryggeri brews local beer right in Trondheim. Several varieties are available, but we highly recommend Miss Saison, made with lemongrass and ginger.

Nidaros Cathedral and Archbishop's Palace Museum: This impressive, Gothic-style cathedral was completed in the early 14th century over the burial place of King Olav Tryggvason. Legend has it that his grave was opened one year and five days after his burial and smelled like roses. Allegedly, his cheeks were rosy, and his wounds were fresh, so he was canonized and is now the patron saint of Norway. Over the ensuing centuries, a series of fires badly damaged the church. Highlights of the extensive restoration begun in the late 19th century include stained glass windows, two German organs and sculptures on the west front. Next door, the Archbishop's Palace Museum houses Norway's national regalia, as well as original cathedral art and sculptures, including the St. Olav altar front painted more than 700 years ago. It's possible to time a visit there with an organ recital, given Monday to Saturday at 1p.m.; a summer service, with music held Monday to Friday from 5:40 to 6 p.m.; or year-round services, held Sundays at 11 a.m. and 6 p.m. Admission fees apply for the cathedral and museum.

Trondelag Folk Museum: This Norwegian Williamsburg is an open-air museum, located around the ruins of King Sverre's medieval castle. Some 60 structures have been reassembled, including 200-year-old barns with sod roofs, farmhouses, cottages and a stave church. "Images of Life" and "The Tronder Bride" exhibitions depict life in the region over the last 150 years. Also on the grounds is Sverresborg Ski Museum, tracing four centuries of Norwegian skiing. (Sverresborg Alle, three miles west of the city center; open 11 a.m. to 6 p.m. daily, June 1 to August 31; 11 a.m. to 3 p.m. Monday to Friday and noon to 4 p.m. Saturday and Sunday, September 1 to May 31)

Stiftsgarden Palace: With more than 140 rooms, there's no shortage of space when Norway's royal family comes to town. In fact, this yellow structure is Scandinavia's second-largest wood building. Built in the late 18th century as a private home, the palace features furnishings in a variety of styles, like Biedermeier, Chippendale and Hepplewhite. Princess Martha Louise had a reception there in 2002 after her wedding at Nidaros Cathedral. (Munkegate 23; open June 1 to August 20, 10 a.m. to 5 p.m. Monday to Saturday and noon to 5 p.m. Sunday; guided tours offered hourly for a small fee)

Monk's Island: This popular summer beach destination has a dramatic history -- from an ancient execution ground and 11th-century monastery to 17th-century fortress and prison. Unfortunately, its cannons could not ward off the Swedes, who conquered Trondheim in 1658 and 1718. The prison's most famous inmate, Danish Count Peder Griffenfeld, spent 18 years there in the late 17th century. The tiny island is 1.25 miles offshore, a quick 15-minute ferry ride on the hour from Ravnkloa. (small fee applies)