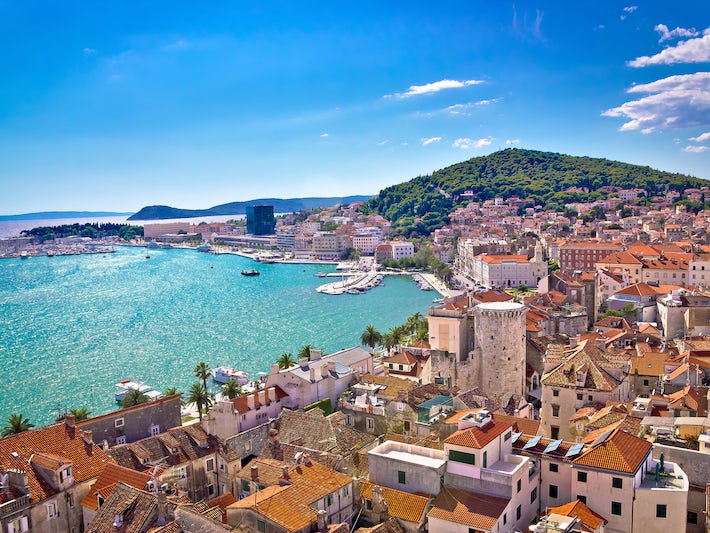 Find Things to Do in Split on Viator

Popular Things to Do in Split

Food and Drink in Split

The Dalmatian coast produces some fine wines; try Plavac Mali from the Peljesac Peninsula if red is your preference, or Posip from the area around Korcula if you enjoy white wine. If beer (known locally as "pivo") is your tipple, you'll be spoiled by the choices; try Karlovacko (which, not surprisingly, hails from Karlovac). Or for a real taste of Croatian history, sip a glass of Osjecko, Croatia's oldest beer, first brewed in 1697.

Diocletian's Palace: It would be very difficult to miss this. The vast walled enclave spans 10 acres and dominates the Old Town. It's effectively a mini-city in its own right, containing hotels, bars, restaurants and apartments. It took 10 years and the efforts of 20,000 slaves to build the palace, and it contains several temples, four imposing gates, villas and a military barracks and encampment, not to mention the emperor's magnificent private apartments. Nowadays, shops and cafes are nestled within its precincts, and it's a delightful place to browse around, even if you're not into historic monuments. (You'll also find several handsome young men dressed as Roman legionnaires who are very happy to pose for pictures.)

A stroll along the Riva: Split's famous waterfront promenade underwent a $12 million renovation in 2007. It's now lined with trendy shops, cafes and bars and is delightful by day and night.

Bacvice Beach: This Blue Flag beach is a short walk away along the Riva. It's a city beach and quite pebbly, so don't expect anything too spectacular, but there are showers and changing rooms at either end, and it's lively and very popular with the locals. It's a good option if you want a seawater dip, a light lunch or a beer or two.

Markets: There are several markets in Split, but the general market beside the palace's Silver Gate is arguably the best. It operates virtually around the clock and is a good place to track down affordable beachwear and buy freshly picked Mediterranean fruits and vegetables. There are plenty of bars here, too, so it's a good place to stop for a mid-morning coffee or a drink. On the other side of the Old Town -- set incongruously close to Marmontova, Split's poshest shopping street -- is a bustling fish market, a culinary education in its own right.

Split's grand squares: Particularly recommended for lovers of fine architecture and sculpture. On Narodni Trg (the People's Square), near the west gate of the palace, you'll see the stunning, 15th-century City Hall, while near the Riva, in Trg Brace Radic, you'll find a superb statue of Croatian Renaissance writer Marko Marulic by Split's most famous sculptor, Ivan Mestrovic. Another of his sculptures, of 10th-century bishop Grgur Ninski, stands near the palace's Golden Gate, and you can see more of his work at the Mestrovic Gallery, which occupies his former home.

Marjan Peninsula: This hilly stretch of land within a 20-minute walk from Split not only is home to the Mestrovic Gallery but also offers quiet, pretty beaches and peaceful, spectacular hiking trails. Not up to walking? You can get there by taxi.

Salona: In Roman times this city was home to around 60,000 people, many of whom fled to Split and sought shelter in Diocletian"s Palace after the city was destroyed by the Slavs. Lots of their artifacts and mosaics are now to be found in Split"s Archaeological Museum (see above), but if you make the three-mile journey to Salona you can also find the remains of the amphitheater, public baths and old city gates.