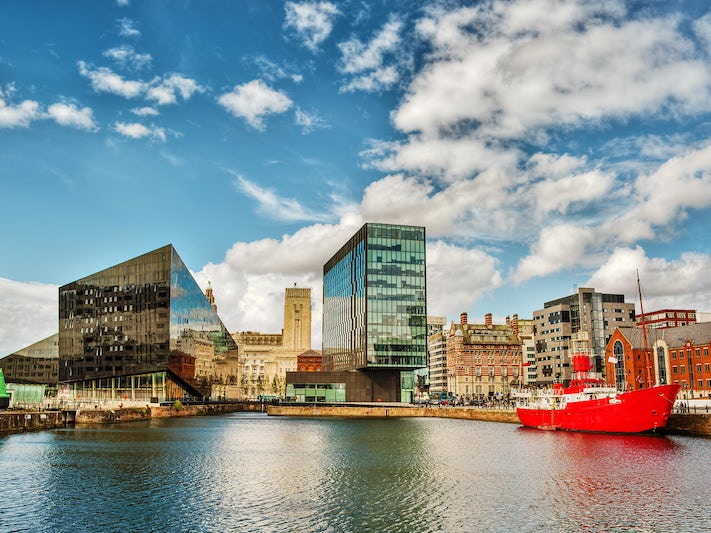 Find Things to Do in Liverpool on Viator

Popular Things to Do in Liverpool

Food and Drink in Liverpool

Several popular lunchtime eateries (open by 11 a.m.) are located within walking distance of the landing stage in the mid-19th century World Heritage buildings that make up the Albert Dock warehouses. Est Est Est is an Italian/Mediterranean-style restaurant located next door to the Merseyside Maritime Museum. Blue Bar & Grill offers an eclectic menu with grilled specialties, and dining is inside or outside on a balcony overlooking the waterfront.

One restaurant with an ocean liner theme is the Seven Seas Brasserie at the Liner Hotel, Lord Nelson Street, just to the left of Lime Street (railroad) Station and one block up. The lobby, bar, restaurant, function rooms, corridors and bedrooms are attractively decorated with shipping posters, prints and photographs. Fresh fish menu items are a good choice. The Liner is also a moderately priced and well-located hotel option.

Hope Street (along the way to the Gothic-style Liverpool Cathedral and the starkly modern Metropolitan Cathedral of Christ the King) is the city's "restaurant row," and two choices are the London Carriage Works at No. 40, which offers brasserie-style food at lunch (around ?10 per person) and more refined fare at dinner (at least ?30 per person for three courses without wine) along with the city's largest wine list, and the pan-Mediterranean Ego restaurant and bar serving tapas and meze options as well as pasta, fish, steak and pizza mains, all for under ?15, apart from the steak.

Just a few streets up from the Chinatown gate and relatively near to the restaurants on Hope Street, on Bold Street, is a delightful little eatery called Italian Club Fish, which serves a simply delicious Italian take on fresh seafood. Oysters, prawns and langoustine are regularly on the menu along with more traditional Italian fare. Prices for mains are between ?15-20.

The Merseyside Maritime Museum is a must, for it reflects the city's considerable shipping history as one of the world's greatest seaports. Exhibits include Liverpool's shipbuilders with some outstanding passenger liner models on display; ship disasters featuring the Titanic, Lusitania and Empress of Ireland (the Forgotten Empress); Battle of the Atlantic about Liverpool in World War II; videos showing the liner Reina del Mar's maiden voyage from Liverpool to Valparaiso, Chile, in the mid-1950's and a Booth Line voyage up to Amazon to Peru in 1960; emigration of millions from Liverpool to the New World; and personal accounts about the life of gay crewmembers working at sea. A newer section is devoted to international slavery from the Middle Passage days to the present and includes such current topics as human rights, personal freedom and racial discrimination. Videos revealing historic as well as present-day treatment such as child kidnapping in India and household slavery can be graphic. The Cafe on the 4th floor is decorated with steamship line flags and shipping posters. Albert Dock. Open daily 10 a.m.-5p.m. Admission is free.

The Beatles Story reveals the singers' early lives in Liverpool and their rise to stardom, and it is located in the Britannia vaults of an Albert Dock warehouse. Be sure to take the audio tour, narrated mostly by John Lennon's sister Julia, for a room-to-room description, plus optional extra reminisces of the four lads' rise to fame and fortune. Examples of the various segments describe their living through working-class childhoods and hard times; being discovered at the Casbah and the Cavern; meeting and teaming up with Brian Epstein; and taking America and the Ed Sullivan Show by storm. Albert Dock. Open daily 10a.m.-6p.m. Admission ?15.95 for adults, ?12 for seniors and students and ?7 for children.

A visit to the Liverpool Cathedral (Anglican) is highly recommended, especially on a day with good visibility, as the view from the tower is outstanding. The Gothic church is visible from most parts of the city and when coming up the Mersey by ship. It's a half-hour walk from the waterfront, but you can also get there by hop-on-hop-off bus. Part of the walk is uphill, with the cathedral set on a high point of land in an attractive park in a residential neighborhood. You can plan your route to pass the Metropolitan Cathedral, a round 1960's Roman Catholic church topped with a glass crown of thorns, or you can walk past the oldest Chinatown in Europe, marked by the largest arch outside of China. The hop-on-and-off tour buses stop at the entrance.

Built over a long period during the 20th century, Queen Elizabeth II officially opened the cathedral in 1974, but its Gothic revival architecture gives a much older impression. It rates as the largest cathedral in Britain, the second largest in Europe and the fifth largest in the world. Volunteer docents circulate to educate visitors about the vast interior's religious and decorative features. The worthwhile climb to the Vestry Tower (331 feet high) is via two sets of elevators and some 108 narrow stone steps. From the top, you can see the entire city, the River Mersey, and the distant Pennine and Welsh hills. Light meals and snacks are available in the Mezzanine Cafe Bar and hot meals in the Refectory. St. James' Mount. Open Monday-Saturday 9 a.m.-4 p.m.; Sunday Noon-2:30 p.m.; Admission to the cathedral is free; Admission to the Tower Experience is ?5 for adults and ?4 for seniors, students and children.

For lovers of sport, a trip to Liverpool wouldn't be complete without a trip to Anfield Stadium. If your trip happens to coincide with match day, and you want to get the full experience of English football (soccer), you'll need to plan well in advance to get a ticket. Anfield seats just over 45,000 fans and ticket availability and prices can vary greatly and depend on the match. Matches against top teams and the ever-important derby against Liverpool's other English Premier League team, Everton, command top prices. Phone numbers for tickets are 0843 170 5555 or 00 44 (0) 151 907 9399 if calling from overseas. If you're not lucky enough to be there on a match day, Anfield still has much to offer. Tours of the stadium are frequent, even on match days, and run between ?15-20 for adults and ?10-15 for children. And the latest addition for Liverpool Football Club fans is the Liverpool Football Club Story, a comprehensive museum complete with trophy hall and a multimedia, audio guide to educate you on the club's long history of success. Entrance is ?8.50 for adults, ?6 for students, seniors and children.

A slightly out-of-town option is a visit to the attractive planned garden suburb that William Lever (the Sunlight Soap manufacturers) built at Port Sunlight in 1888. As the founder of Lever Brothers, his objective was to provide a then unparalleled standard of living for his workers. He hired 30 architects to create a square-mile village of residential housing, churches, recreational facilities, stores and areas of open space. The village is still very much inhabited, and the original factory building remains on the site. The Sunlight Vision Museum has a visitors' center and shows a film depicting life in the suburb in late Victorian and Edwardian times. Also on site is an art museum built by Lady Lever to house her considerable collection of 18th and 19th century paintings and porcelain, decorative arts and furniture. Both are open daily, 9 a.m.-5 p.m. Admission is ?3.75 for adults, ?2 for children and ?3 for students and seniors. Port Sunlight is easily reached in 12 minutes by Merseyrail with trains leaving James Street Station (two blocks from Pier Head) every 15 minutes to Bebington Station and a signposted ten-minute walk.