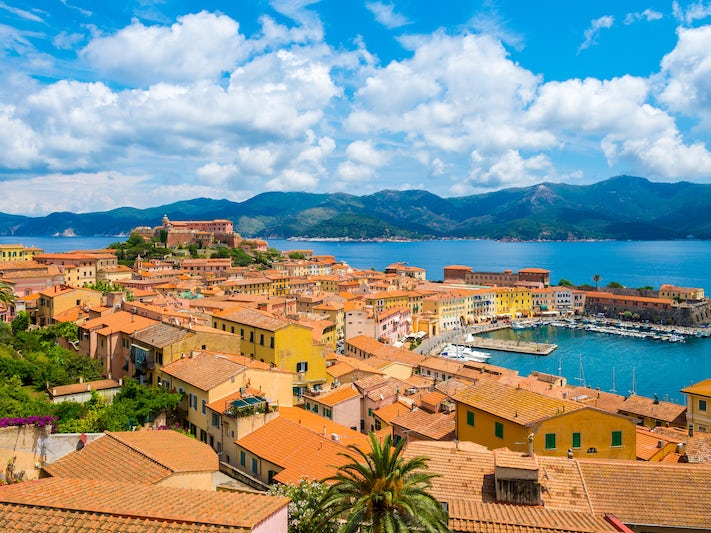 Find Things to Do in Elba on Viator

Popular Things to Do in Elba

Food and Drink in Elba

Da Zucchetta: (Piazza della Repubblica 40, Phone: 0565-915331) Located in the historic center of Porto Ferraio, this little restaurant has been around since 1891 and serves everything from pizza to oysters in a charming Tuscan-inspired atmosphere. Closed Tuesdays and Wednesdays.

La Barca: (Via Guerrazzi 60/62, Phone: 0565-918036) "The Boat" is one of Elba's better-known restaurants, located in the Old City. Locals love it and return again and again; you can sit outside or inside. Try the "gnocchi all'Elbana" for a regional taste or choose from among many fresh fish items.

Editor's Note: There are several casual dining spots and trattorias along the waterfront at the marina.

Villa dei Mulini: (Napoleon's Palace, Phone: 0565-915846) When Napoleon Bonaparte was exiled to sleepy little Elba in 1814 (when the island "belonged" to France), he certainly made the most of his "imprisonment." Of course he didn't realize that he wouldn't be staying awhile, so he built an elaborate villa above the city, near Fort Stella, using a simple Tuscan structure as its base. Most of it is unchanged from his stay, with artifacts such as art works, furniture and documents preserved for public viewing. Closed Tuesdays.

Fortezze Medicee: When construction was started on this stunning crenellated fortress in the mid-1500's, Elba was under the governance of Spain, and the structure was built for the behest Cosimo I, Grand Duke of Tuscany, with the blessing of King Charles V. The fort proved its worth in 1553 when, sent by the French to try to capture Elba, the Turkish pirate Dracut decided that the port was impenetrable and departed.

Museo della Misericordia: Located next to the church of the same name, this important little museum holds, among other things, Napoleon's death mask (we're not sure how it arrived here from Devil's Island, but most of the items were donated by Prince Anotolio Demidoff, Napoleon's nephew, who was left in charge of many of the French Emperor's effects).

Villa San Martino: (Phone: 0565-914-688) Napoleon Bonaparte decided that his palace in Porto Ferraio wasn't enough, so he also built a "summer villa" inside an old church. Still standing, and updated by Prince Demidoff to include his gaudy monograms strewn around, it's the cottage in the back where the Emperor really thrived, wrote and relaxed. The villa is located about two miles south of the city and is accessible by cab.

Dell' Open Air Museum Italo Bolano: (Phone: 0565-914570) Elba's current favorite son, contemporary artist Bolano, has a gallery/museum in the "open air" that visitors can wander through. The artist features paintings, sculptures, ceramics and glass works; of course you can purchase items as well as gawk at them.