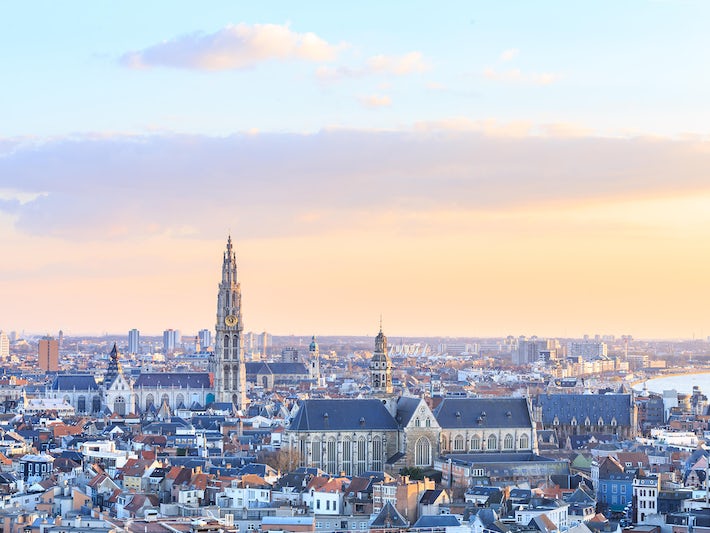 Find Things to Do in Antwerp on Viator

Popular Things to Do in Antwerp

Food and Drink in Antwerp

For a small city, Antwerp has a surprising number and variety of restaurants, ranging from gourmet dining to tiny waffle shops. Local specialties include mussels and fries (moules et frites); seafood, in general, is excellent. For sheer variety, browse the narrow medieval streets surrounding the cathedral. If you don't see something that really catches your eye, move on.

Zuiderterras is right on the riverfront near the Wandelteras Zuid cruise terminal. This modern black-and-white building was built in 1973 on the site of one of the city's 19th-century customs houses that had recently burned down. Huge plate glass windows over two floors give a great view back over the river. The menu is contemporary Belgian and includes dishes like filet of lamb, wild boar (in season) and the ever-popular fish and chips. It also serves up an excellent selection of fresh main-course salads. (Ernest Van Dijckkaai 37; 32-3-234-1275; open daily from 9 a.m.)

Fiskebar is a noisy, cheerful, white-tiled seafood restaurant at a famous road junction in the Parisian-style design quarter south of the city center. Get there early in the evening, as the place fills up with young fashionistas. (Marnixplaats 12-13; 32-3-257-1367; open, daily from noon.)

Lux is a conversion of a Polish merchant's house overlooking the Bonapartedok. The family made its money fitting out ship's galleys, and Lux's grand staircase reflects how lucrative this business was. The delicious four-course Lux Menu is very good value. Book ahead to get a table in the window upstairs. (Adrian Brouwerstraat 13; 32-3-233-3030; open daily from 6 p.m.)

Brasserie Appelmans & Absinthe Bar is named after the master builder of the cathedral and built over a medieval wine cellar. (Papenstraatje 1; 32-3- 226-20 22; open daily from 6 p.m.)

The lengthy menu at Del Sud Classico includes two pages of pizza options alone, along with other Italian favorites like calzones and pasta. Inside it's warm and homely, with brick walls and murals of Italian life. (Oude Koornmarkt 5; 32-3-226-5245; open daily from 11:30 a.m.)

Tucked away on a cobblestone side street just next to the Cathedral is Het Vermoeide Model, where light lunch options include omelets and croque monsieur sandwiches. (Heartier dishes are also available.) One half is an art gallery, and the other is a restaurant/tavern with brick walls, wood fixtures, plenty of green plants and a warm ambience. (Lijnwaadmarkt 2; 32-3-233-5261; open daily for lunch and dinner.)

For sheer style, Restaurant Kathedraalcafe is hard to beat. This small brick house is crammed full of religious statuary and has a theatrical feel. It serves bistro meals and snacks. (Torlburg 10; 32-3-289-3466; open weekdays from noon, weekends from 11 a.m.)

Cheap little waffle houses can be found on every other corner in Antwerp, but, for one of the best, try the tearoom known as Desire de Lille. There, fluffy waffles are topped with ice cream, fresh fruit or simple powdered sugar. Salads and light snacks are also available, and there's a garden, too. (Schrijnwerkersstraat 14 - 18; 32-3-233-6226; open from 9 a.m.)

Grote Markt is the main square of Antwerp's old city, surrounded by historic guild houses and the imposing Stadthuis (Town Hall) with its rows of colorful European flags. In the center of the cobblestone square is the Brabo fountain, which pays tribute to a local legend about how the city got its name. The story says that a giant called Druoon Antigoon used to guard the Scheldt River, cutting off the hands of any sailors who refused to pay a toll to him. A Roman soldier named Silvius Brabo eventually managed to kill Antigoon, chopped off the giant's hand and threw it in the river. To this day, the hand is the symbol of Antwerp. (The city's name sounds like the words for "hand-throwing" in Dutch.)

The massive Cathedral of Our Lady took 169 years to build, beginning in 1352. Today its 403-foot-high Gothic spire is still the focal point of Antwerp's skyline. Inside are four major paintings by Peter Paul Rubens, including the famous "Descent from the Cross." The dramatic Appelmans statue near the main entrance commemorates the master builder of the cathedral.

Antwerp handles more than half of the world's diamonds, so if you own an engagement ring or a set of diamond earrings, there's a good chance it was produced here. There are plenty of stores across the city if you want to buy jewelry, but if you just want to enjoy the sparkle, visit (and maybe learn a bit at) the Diamantpaviljoen at the Museum Aan de Stroom (MAS). (Hanzestedenplaats 1; 32-3-338-4434; open Tuesday to Sunday from 10 a.m.)

Peter Paul Rubens is Antwerp's most famous and beloved native son (even though he was actually born in Germany, he spent most of his life in Antwerp), and his life and art are celebrated at the Rubenshuis, his former home. Visitors can tour the elegant rooms where Rubens ate, slept and painted; view items from his art collection (plus many of his own works); and then explore the house's Flemish-Italian Renaissance garden. (Wapper 9 - 11; open Tuesday to Sunday from 10 a.m. to 5 p.m.; 32-3-201 1555)

Standing guard over the Scheldt River like the castle it once was, the Steen is Antwerp's oldest building, built around 1200 and later converted into a prison. Today it is a visitor center and cafe aimed at children and may be a useful refuge if yours get fed up with medieval ladies and Rubens' nudes. (Steenplein 1; 32-3-201-9340; open Tuesday to Sunday from 10 a.m. to 5 p.m.)

The Rockox House is less well known than Rubens' house but deserves a visit. There, you will see how one of Rubens' wealthy patrons lived. Nicolaas Rockox (1560 - 1640) was an Antwerp merchant and sometime city mayor. He was also an avid art and coin collector. The house contains works by Brueghels, Rubens and Van Dyck, as well as enough 16th- and 17th-century furniture to make it still feel like a home. The courtyard garden has recently been reconstructed. (Keizerstraat 12; 32-3-201-9250; open Tuesday to Sunday from 10 a.m., closed some holidays.)

The 163-year-old Antwerp Zoo, located just behind the glorious Central Station, is home to 5,000 animals from around the world -- including giraffes, elephants, hippos and several species of penguins. (Koningin Astridplein 26, +2 3 202 4540, daily from 10 a.m., various closing times throughout the year)

For big-name fashion, try the boutiques on and around Nationalestraat (where you'll also find the MoMu Fashion Museum at number 28). European department stores sit behind the historic facades on elegant, pedestrian-only Meir, where the rent is supposedly so high -- between $40,000 and $66,000 per month -- that most actually lose money.

Zurenborg, an elegant residential neighborhood just north of the Berchem train station, is a showcase of Art Nouveau architecture. Like many newly emerged countries at the end of the 19th-century, Belgium celebrated its newfound sense of identity in Art Nouveau. It was a very costly style. Look for wrought-iron individual balconies, vividly colored mosaics, stained-glass windows and curving facades. The largest, most opulent mansions can be found along Cogels-Osylei, but the smaller houses along the nearby side streets also have interesting and intricate architectural details.

Take a day trip to Ghent, about a 45-minute train ride from Antwerp Centraal. In the Middle Ages, Ghent was one of Europe's most powerful mercantile cities thanks to its thriving textile trade. Today, you can still visit the 15th-century Cloth Hall and a magnificent cathedral, St. Bavo's, that contains "The Mystic Lamb" by Hubrecht and Jan van Eyck, recognized as the principal work of the Flemish school in the 15th century.