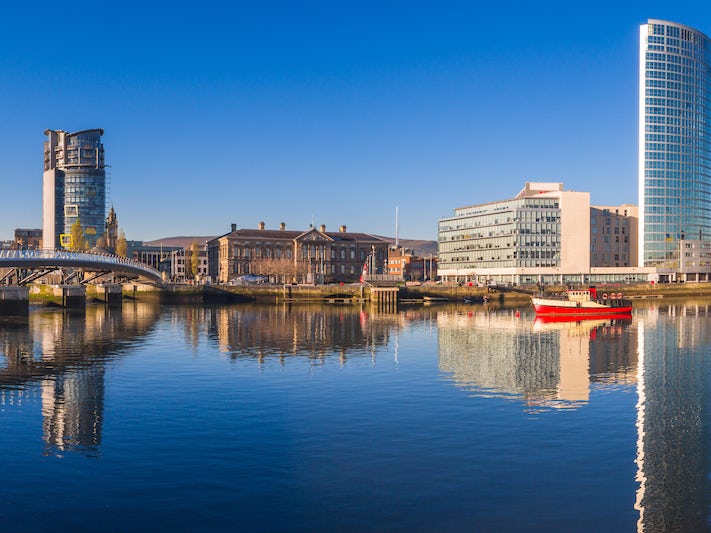 Find Things to Do in Belfast on Viator

Popular Things to Do in Belfast

Food and Drink in Belfast

Nearly every pub serves food in some shape or form, and these are great places to try local dishes like sausages with champ (mashed potatoes fancied up with spring onions and butter) or oysters fresh out of the bay. Sandwiches and Irish stew can also be found on nearly every menu, and dining in a pub is a great way to soak up the local atmosphere during your meal. For a more formal dining experience, check out one of the hot new restaurants indicative of Belfast's growing food scene.

Best Local Eats: The John Hewitt (51 Donegall St., lunch Monday through Saturday from noon to 3 p.m.) serves up traditional Irish food at reasonable prices, including homemade soup, grilled lamb and roasted salmon. The mood there is always festive, and a great selection of beer and wine adds to the attraction.

Best for an Upscale Treat: James Street South (21 James St., lunch Monday through Friday from noon to 2:45 p.m.) is an elegant eatery offering modern versions of Irish favorites in a chic, minimalist setting. Prices are a little high, but the three-course lunch menu is actually quite reasonable at $29. Try the warm duck salad and roast sea bream, and finish the meal off with chocolate panacotta, a creamy dessert jazzed up with spiced plums.

Best for Families: Parents can make it easy on themselves by taking the kids to the Odyssey (2 Queen's Quay, open at 9 a.m.), a multi-story entertainment complex chock-full of eateries, shops and diversions. The Odyssey Pavilion houses several restaurants popular with children, including a sandwich bar, a pizza place, a Chinese restaurant and an old-fashioned diner called Soda Joe's.

Best in Bushmills: If you're paying a visit to Bushmills, stop for a midday bite at the restaurant at the Bushmills Inn, located at 9 Dunluce Road. Open for lunch from noon to 6 p.m., you'll find menu items like seafood tempura, smoked salmon, burgers, steak, pasta and a selection of desserts. A vegetarian menu is also available.

Titanic Belfast: This building, dedicated in memory of Titanic and its tragic end, opened in early 2012, just in time for the 100th anniversary of the sinking of the ship, which was born in Belfast. The oddly shaped structure, resembling a ship's hull, is home to the Titanic Experience, which leads visitors through the tale of the storied vessel. It is the world's largest Titanic visitor attraction, extending over nine interactive galleries -- so you can explore the shipyard on a cable car ride, walk the decks of the doomed vessel and travel to the depths of the ocean to view it on the seabed. Titanic Belfast is open daily from 9 a.m. to 7 p.m. in June and July, 9 a.m. to 8 p.m. in August, 9 a.m. to 6 p.m. in April, May and September and 10 a.m. to 5 p.m. the rest of the year.

Belfast Castle: Just a couple of miles northwest of the harbor, Belfast Castle is one of the city's must-see attractions. The structure itself is a grand collection of towers and battlements, and the castle's position -- nearly 400 feet above sea level -- means visitors are treated to excellent views of both the city and the nearby lough. The interior rooms are opulent, and the cellar houses a fancy restaurant and an antique shop selling porcelain, China, jewelry, hand-knitted items and other goodies. The castle is open 9 a.m. - 10 p.m. on Tuesday - Saturday, 9 a.m. - 5:30 p.m. on Sunday, 9 a.m. - 6 p.m. on Sunday.

Ulster Folk & Transport Museum: Unlike most museums that only feature visual displays, the Ulster Folk & Transport Museum allows guests to actually wander through a bygone era. Spread out over 170 acres of rolling countryside, the Folk Museum features dozens of 19th-century buildings, moved intact from various parts of northern Ireland and then arranged to form a town of sorts. Visitors walk freely through houses, farms, mills and churches while costumed actors show how citizens from that time period went about their daily lives. In the Transport Museum, all forms of transportation from the horse-drawn carriage to the locally built Titanic are showcased. The museum lies seven miles east of the city center and opens at 10 a.m. - 5 p.m. on Tuesday - Sunday.

Belfast Cathedral: Impressive on the outside, the Belfast Cathedral is even more beautiful on the inside. You'll find the tallest Celtic cross in all of Ireland there, in addition to elaborate stained-glass windows and a mosaic ceiling. Located near the heart of the city on Donegall Street, the cathedral is perfectly located for a brief visit as you stroll through the city center.

The Botanical Gardens: Visitors and locals alike love to lose themselves in the lush greenery of these gardens. Just a short stroll south of the city center, tucked away behind Queen's College, the gardens were founded in 1827 and contain a vibrant assortment of plant life, including a stunning rose garden. Hidden among the foliage is the Palm House, a unique glass and wrought-iron structure that houses a wide range of tropical plants. One of the most calming venues is the Tropical Ravine with its tranquil ponds and enormous water lilies. The gardens are open daily from 8 a.m. to sunset, while the Palm House and Tropical Ravine can be viewed from 10 a.m. to 5 p.m., although they close for one hour between noon and 1 p.m.

Belfast Zoo: With a lovely hillside setting overlooking the city, the Belfast Zoo makes a nice detour for both animal-lovers and anyone seeking a quick visit to the city's picturesque outskirts. Some of the zoo's highlights include red pandas, Hawaiian geese and a wide variety of monkeys in addition to gorillas, elephants and tigers. It's open from 10 a.m. to 6 p.m. in the summer and 10 a.m. to 4 p.m. in the winter.

Carrickfergus: Those yearning for a taste of Ireland's small-town charm will feel right at home in Carrickfergus. This small suburb of Belfast is only 12 miles north and easily accessible by train, bus or taxi. The quiet seaside town contains beautiful 18th-century homes in addition to an 800-year-old castle, several nice churches and the Andrew Jackson Centre, a monument to the U.S. president whose parents hailed from Carrickfergus. The town has attractions to suit all ages, and children in particular will love the Knight Ride, an audio-visual journey through the town's past.

Giant's Causeway: Northern Ireland's most famous natural attraction is Giant's Causeway along its northern coast. A two-hour drive from Belfast, the causeway, which is described by Northern Ireland's own tourist folks as a "geological freak," first began attracting tourists in the 1700's. What makes this stretch of coast unusual is that the area is a mass of basalt columns packed tightly together; the tops of the columns form stepping stones that lead from the cliff foot and disappear under the sea. There are more than 40,000 of these columns, mostly hexagonal in shape. The tallest are about 40 feet high, and the solidified lava in the cliffs is 90 feet thick in places.

Bushmills: Nearby is the town of Bushmills, home to Ireland's oldest maker of whiskey. The distillery offers tours; make reservations in advance.

Pubs: Belfast is home to several of Ireland's oldest and most famous pubs. With so many to choose from, finding a place to stop and whet your whistle is never a problem; the challenge comes from trying to decide which one to visit first. Most pubs start serving at 11:30 a.m. every day except Sunday, when the doors open at 12:30 p.m.

The Crown Liquor Saloon: This place aptly reigns as the king of Belfast's pub scene. The building is a showcase of Victorian splendor, both inside and out, and visitors can enjoy their pints surrounded by stained glass, beveled mirrors, marble and mahogany. If you've ever yearned for the sensation of sipping a drink in a pricey antique market, then this is the place for you. (46 Great Victoria Street)

White's Tavern: The tavern, first opened in 1630, claims the title of Belfast's oldest pub. The small, unassuming building is tucked away in an alley and can be hard to find, but persistent explorers can reward themselves with a drink in one of the city's most venerable institutions. There's no pomp and circumstance -- just well-poured pints and a quiet, rustic atmosphere. (2-12 Wine Cellar Entry, between Rosemary and High Streets)

The Morning Star: It once served as the final stop on the Dublin-to-Belfast stagecoach line, which might explain the horseshoe-shaped bar. The building dates back to 1810 and provides one of Belfast's most comfy, cozy pub experiences. (17-19 Pottingers Entry. James Street South)