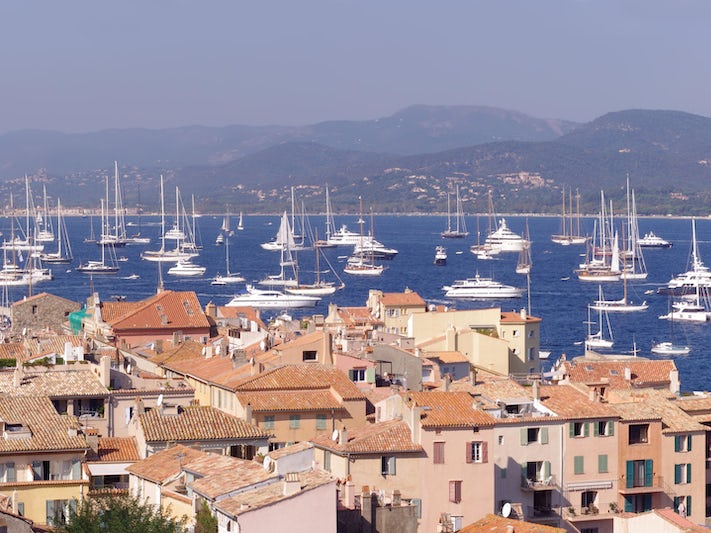 Find Things to Do in Saint-Tropez on Viator

Popular Things to Do in Saint-Tropez

Food and Drink in Saint-Tropez

Wining and dining is a major focus of the French, and this region in particular is known for its locally produced rose wines and fresh fish. Popular dishes include bouillabaisse, salad Nicoise and ratatouille, a tomato-based vegetable accompaniment. Lunch is typically served from noon to 2:30 p.m. A new craze: Ice Tropez, a sparkling cocktail made with wine flavored with nectarine blossoms. Generally, a service tip is included in the bill. However, it is customary to leave a few coins.

La Boite a Sardines: This cute little bistro located about halfway between the port area and the Citadelle serves Marseillaise-style food, very Provencal in flavor and not terribly fussy with cream sauces. Fresh, regional food and fish are the specialties; there's a quite affordable fixed-price lunch menu. (3 rue Saint Jean; 04-94-56-48-08)

L'Olivier: This gorgeous restaurant is located in the small, tony hotel La Bastide de Saint-Tropez, in the hills above the gulf. It is a budget buster but offers up a memorable taste of the finest Provencal cuisine. Specialties include duck fois gras on two cushions, roasted monkfish and lobster ravioli. There's a costly fixed-price lunch menu, but it's worth the euros to sit under the ancient olive trees, around the pool or inside the glass-domed conservatory and realize that you, too, are one of the beautiful people. (Route des Carles; 04-94-55-82-55)

Sous le Soleil: Playing on the name of a popular and long-running television show in France, this little bistro is located in the new port, just to the right of where the tender drops you off. It serves simple fare: grilled fish and meats and huge salads. (6 quai de l'epi, Nouveau Port; 04-94-97-53-90)

Le Cochon du Mer: Located just at the edge of the new port, not far from the tender dock, this seaside cafe specializes in Provencal and Marseillaise cooking: lots of simply prepared fresh seafood with Mediterranean ingredients. We just love the name of the place, which means "Pig of the Sea." Pricing is a la carte. (1 quai de l'Epi; 04-94-97-46-00)

Strolling: This is an ideal small town in which to wander and amble. You can window shop, admire the gardens, gawk at the exquisite multimillion-dollar yachts or sip a cafe au lait or fine red wine. Charming little streets and alleyways emerge onto breezy squares. On Tuesdays and Saturdays, there's an open market at Place des Lices, the main square; during the rest of the tourist season, from May through most of September, there are street musicians, vendors and locals playing boules or bocce.

The Citadelle: Climb the hill to this ancient fortress above so-called "Millionaires' Bay." A maritime history museum, five years in the making, made its debut there in 2013. It's located in a dungeon and documents the daily lives of the men and women who, over the centuries, shaped the Saint-Tropez of today. It is closed on Tuesdays. Even if you don't go in, it's the best spot in town for photo opportunities.

Musee de l'Annonciade: The building for this museum is a chapel dating to the 16th century; it was converted in the 1950's to a museum and became the pride of Saint-Tropez. Through an aggressive acquisition program, the museum now features works from an array of French artists including Seurat, Dufy, Braque, Signac and Matisse. The paintings represent, for the most part, the Pointillist, Fauvist and Nabist periods. (Place Grammont, The Port; open Wednesday to Monday from 10 a.m. to noon and 2 p.m. to 6 p.m.)

Maison des Papillons: Just off the central rue Clemenceau is this little house transformed into a butterfly museum. The attraction contains more than 4,500 specimens (dead, not alive) collected by the proprietor, Danny Lartigue, who guides you through the exhibit. Look for the very rare Black Apollo of Mercantour. (9 rue Etienne Berny; open every afternoon except Sundays from 2:30 p.m. to 6 p.m., April 1 to October 30)

Beaches: You can walk to the beaches near town, although they are not the nicest. Plage de la Bouillabaisse is the closest, about a mile from the tender dock along the seafront road. There are a couple of nice beachfront restaurants for lunch there, including Bouillabaisse and Golfe Azure. Farther out, Baie de Pampelonne is where you want to go beaching, as this is what Saint-Tropez is all about: beautiful people hanging out in the sun. Located south of town, closer to the village of Ramatuelle, some of the beaches and beach clubs there are quite ritzy. The most popular is Tahiti Beach, named by Forbes magazine as the best topless beach in the world. Beware: You'll see little if any clothing, so if you can't cope, don't go. It's only about seven miles away, but transportation is difficult to find. You can take a cab or get a bus schedule from the tourist office, but most people recommend you rent a scooter for the day.

Boat Excursion: For just a few sous (French coins), you can take a narrated one-hour boat excursion with Transports Maritimes Tropeziens around the Saint-Tropez area. As you weave around the yachts at anchor, you'll see the Citadelle, the maritime cemetery, old Saint-Tropez (La Ponche) and the Bay of Canebiers, plus other sites as determined by the master -- who will also point out the yachts and villas of celebrities. (Old Port; 04-94-55-09-92)

Port-Grimaud: Known as the Venice of the Cote d'Azur, this little port town not far from Saint-Tropez is worth a visit. The actual town of Port-Grimaud is a 60-year-old French-style planned community, where Provencal houses are built on canals and yachts are moored nearby. But walk a ways into the hills above this new town, and you will find a medieval village complete with a castle and fairy bridge. Really ... it's called Fairy Bridge! Les Bateaux Verts runs a water shuttle from Saint-Tropez to Port-Grimaud (04-94-49-29-39).