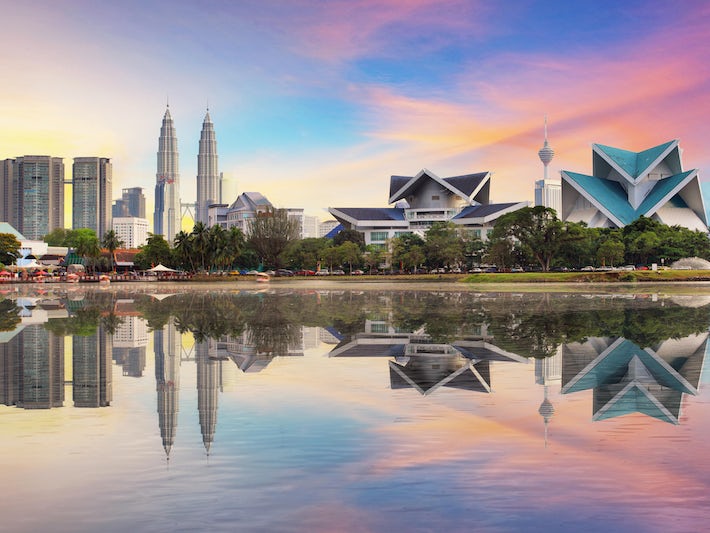 Find Things to Do in Kelang (Kuala Lumpur) on Viator

Popular Things to Do in Kelang (Kuala Lumpur)

Kuala Lumpur's dining scene offers something for everyone, ranging from Western fast food chains like McDonald's, KFC and Starbucks (and, yes, Hard Rock Cafe) to ethnic specialties. The majority, naturally, feature the cuisines of Asia. While Malaysia is a Muslim nation, alcohol is available in most of the restaurants.

Shopping centers, such as Suria KLCC at the base of the Petronas Towers, feature food courts for a quick bite.

Hawker food is quick and affordable. The best areas for hawker food are places like Jalan Imbi and Jalan Barat as well as Chinatown. Everyone probably knows what satay means (marinated and grilled meat), but other popular options include hokkien mee (noodle soup with prawns, ribs, bean sprouts and chili paste) or ikan bakar (grilled fish), just to name a few.

The Petronas Twin Towers feature an extraordinary sky bridge between the twin buildings at levels 41/42, 558 feet above ground, and an observation platform on level 86, 1,181 feet above ground. The towers are located in the "Golden Triangle" bounded by Jalan Imbi, Jalan Ampang, Jalan and Tun Razak. This section is home to most of KL's hotels, office complexes and shopping malls. (open 9 a.m. to 9 p.m. Tuesday to Sunday but closed from 1 p.m. to 2:30 p.m. Fridays)

Despite the rapid pace of building in the past few years, the Colonial District is still replete with historic buildings that offer a quaint ambience. You'll find many colonial buildings in and around Merdeka Square, including the Royal Selangor Club (a former magnet for British society) and the Sultan Abdul Samad Building (also constructed by the British as their administrative seat). The square features a flagpole said to be the tallest in the world. Other notable colonial architecture nearby includes the former post office, the National Textiles Museum and the original Kuala Lumpur Railway Station, a fantasy of turrets and gingerbread.

The National Museum features exhibits -- all with information in English -- that focus on the country's history, culture, arts and crafts, economic activities, weapons, transportation and more. (open 9 a.m. to 6 p.m.; free tours at 10 a.m.)

Also found in the "Golden Triangle" is the Kuala Lumpur Tower (called Menara Kuala Lumpur). From a height of 905 feet, visitors can enjoy superb views of the city, except during hazy or rainy days, of course. A cultural village, aquarium, F1 race car simulator and other attractions are located in the same complex. (open 9:30 a.m. to 9:30 p.m.)

With its lush gardens, the old King's Palace ranks as a popular photo stop during sightseeing trips. The new palace (Istana Negara), with its impressive 22 domes, also has been popular for shutterbugs since it opened in 2011. Neither is open to the public.

The Central Market is a former fresh-food market that has been transformed into stalls that sell crafts, antiques and souvenirs. On the upper floor of the Art Deco building, a food court serves local cuisine. (Jalan Hang Kasturi; open 10 a.m. to 10 p.m.) Not far away is Petaling Street, KL's historic Chinatown. It's been pedestrianized and covered with a green roof dubbed the "Green Dragon." If you like to haggle for knockoffs, this is your spot. Try to pay no more than half the initial asking price.

With a very international and bustling atmosphere, Bukit Bintang is one of the busiest areas for shopping, dining and entertainment; think of it as Kuala Lumpur's version of New York's Fifth Avenue. Numerous shopping malls, such as Pavilion, Sungei Wang Plaza and Lot 10, are located in this area. These are great places to shop for affordable clothing, among other things.

If you're prepared to climb 272 steps (yep, we counted them), Batu Caves is an awesome attraction. Founded by American naturalist William Hornaday in 1878, the limestone cave has become a popular spot for Hindu pilgrimages. A wild population of monkeys brings an added challenge on the steep climb, as they are very aggressive when seeking something to eat. Batu Caves is located eight miles north of the city center. (open daily from 7 a.m. to 7 p.m.)

An hour's bus ride from Kuala Lumpur sits the mountain retreat of Genting Highlands, one of the most popular resorts in Malaysia. Located 6,500 feet above sea level, Genting Highlands is a bit like Las Vegas -- with an amusement park, the largest show restaurant in the country (often with some of the most famous entertainers in Southeast Asia) and the only place with legal gambling in Malaysia. The resort also features several hotels, a water park and golf courses.