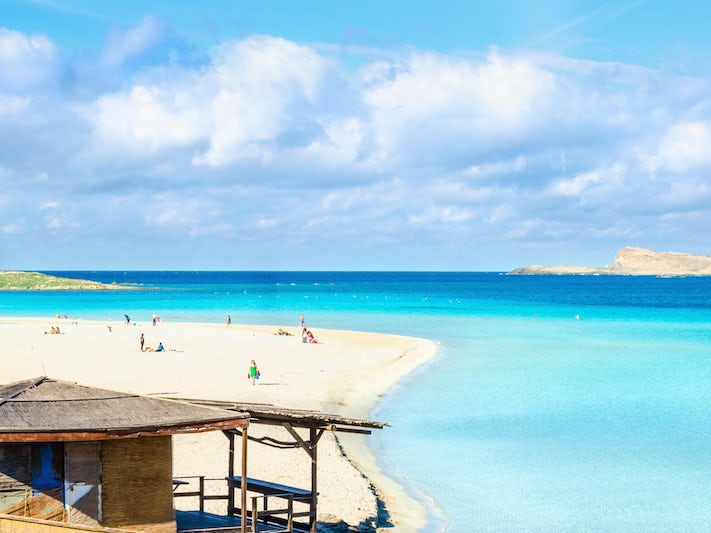 Find Things to Do in Sardinia on Viator

Popular Things to Do in Sardinia

Food and Drink in Sardinia

Sardinia's culinary heritage has evolved from the sea that surrounds the island. Lobster boiled and garnished with olive oil is a local cherished dish. Seasonal fruits and vegetables are served alongside entrees. Lunch is the main meal of the day, served between noon and 2 p.m. Other favorites include hearty meats like roast piglet (porchetto), braised wild boar and lamb, fried tentacles of sea anemone (orziada), stuffed calamari and pecorino sardo -- a fabulous ewe's milk cheese (the happy sheep feed on pungent wild herbs). Don't miss torrone, nougat candy made with local honey and nuts.

Beach Restaurant: Rafel is located on the beach at Lido di Alghero. Chairs and umbrellas are for rent on the beach. The restaurant will serve you on the beach while you eat. There are also chairs for free inside of the restaurant overlooking the beach. Try the spiny lobsters, grilled fish or fish chowder. (39-079-950385; open 12:30 p.m. daily, closing hours vary)

Sardinian wines have been linked to longevity among villagers of Oliena, so drink up! Among the best are Vermentino whites and dry Cannonau reds. Don't leave without trying the delicious dessert wine, mirto.

Idyllic beaches are numerous along Sardinia's amazing coastline, but you'll need a car to get to most of them.

Best for Families: Popular Poetto Beach, just east of Cagliari, is easily reached from the city center. It has a white sandy beach, is excellent for swimming and surfing, and has chairs and umbrellas for rent. It's good for families because it has public restrooms, and there's a supermarket nearby where snacks and drinks can be purchased at reasonable prices.

Best for Nature-Lovers: Su Giudeu, with its sandy dunes, clear sea and fine sand dotted with juniper trees, is one of the most beautiful beaches in the Mediterranean. Chairs and umbrellas are available for rent.

Best for Families: Close to the city's ancient walls, flanking Alghero in the village of Fertilia, is a sandy beach with still waters ideal for families with children. Chairs and umbrellas can be rented.

Best for Nature-Lovers: The shapes of junipers and the deep green of the pine trees provide the backdrop for the white sandy dunes of Maria Pia beach. At the back of the beach is a picturesque pine forest.

Best for Beach Bums: Speranza Beach, surrounded by breathtaking bays, has fine sand and crystal blue waters. Visitors will find umbrellas and chairs for rent, as well as a restaurant. Biking trails lead to the beach and provide a fun excursion.

Best for Romantics: Costa Paradiso, between Santa Teresa and Castelsardo, is one of the island's most beautiful stretches of coastline. Other lovely spots include Capriccioli and Romazzino beaches set on sandy bays near Porto Cervo.

Best for Beach Bums: Try a day trip to Spiaggia del Principe Beach on the Costa Smerelda. This beautiful beach with its fine sand and blue-green water was described as Aga Khan's favorite. It is a perfect spot to work on a tan and provides excellent opportunities to snorkel.

The Nuraghe Palmavera archeological site in Alghero located on the Southern slope of the mountain of the same name is one of the most important settlements dating to prehistoric times. The nuraghe, divided by two towers and surrounded by a defense wall and a village, is an opportunity to explore the remains of an ancient civilization.

Walk along the pier at Porto Cervo in Costa Smeralda, which was created by Aga Khan in the 1960s. Gaze at the bevy of beautiful yachts moored in the harbor. You can also charter your own yacht for a memorable day on the water. Look for prestigious sailing races, such as the Sardinia Cup, the Swan World Cup and the Maxi Yacht Rolex Cup.

Take a stroll around Alghero's Old Walled Town, making sure to stop at the 14th-century ornate Church of San Francesco Cloister. Try a lobster dish. It is said that the lobsters in Sardinia are among the tastiest in the world and that England's Queen Elizabeth ordered them from Sardinia for her wedding dinner.

In Cagliari, visit the Citadel of Museums and Castle District with its bevy of museums. The National Archeological Museum (open 9 a.m. to 7:15 p.m.) showcases Sardinia's ancient history, with finds dating back as far as the Pre-Nuragic era (6,000 B.C.). The National Gallery (open 9 a.m. to 8 p.m.) is housed on three floors with displays of Spanish artwork dating to the 14th century. Check out the Wax Museum (open 9 a.m. to 1 p.m. and 4 p.m. to 7 p.m.) featuring wax models of human anatomy created by artist Clemente Susini and the Museum of Siamese Art (open 10 a.m. to 6 p.m.) with its vast collection of Siamese and Oriental art. All museums are closed on Mondays.

Cagliari Botanical Gardens, with its hundreds of trees and thousands of plants, was established in 1866 by the University of Cagliari. Located at the bottom of the Roman Amphitheater, the gardens also contain ancient Roman and Phoenician cisterns. (Open 8:30 a.m. to 3:30 p.m., closed Saturday and Sunday)

Try one of the classic scuba diving spots around Sardinia. Among the fascinating options are the sea caves of Capo Caccia. The Cave of Neptune with its monumental stalagmite and bird-nesting fountain is accessible by sea with daily trips by boat from the port, or you can climb the set of 660 steps into the cliff side.

Hiking through the Gola Su Gorropu canyon provides quite a challenge for any hiking enthusiast. Allow 4 to 5 hours for the scenic roundtrip hike that includes many cliffs and caves. Spring and autumn are the best times to hike in Sardinia, as the temperatures are mild.

The Selvaggio Blue is one of Europe's most difficult hikes with stunning views of the Gulf of Orosei. The 30-mile trek is on Sardinia's isolated coast near Costa Smeralda and includes tough terrain.

Hop aboard the Trenino Verde (The Little Green Train), a historic steam locomotive. Of the four lines, the Mandas/Arbatax line is considered the most scenic. A vintage rail car crosses the southern slope of Mount Gennargentu National Park, in the provinces of Nuoro and Ogliastra, a wild and unspoiled area of forest and wildlife (mid-June to mid-September).

For a sweeping view of Cagliari rooftops, take the panoramic elevator at Piazza Costituzione to the top of Bastione San Remy. The elevator built from 1899 to 1902 affords stunning views of the city.

Visit the San Benedetto Market with its tasty variety of produce and fish and for a glimpse of the locals as they barter for the best prices. The market, one of the largest in Europe, is on two floors. The first is devoted to fish, with many varieties, from lobsters to baby crabs and oysters. (Open 7 a.m. to 2 p.m. Monday to Saturday, closed Sunday)