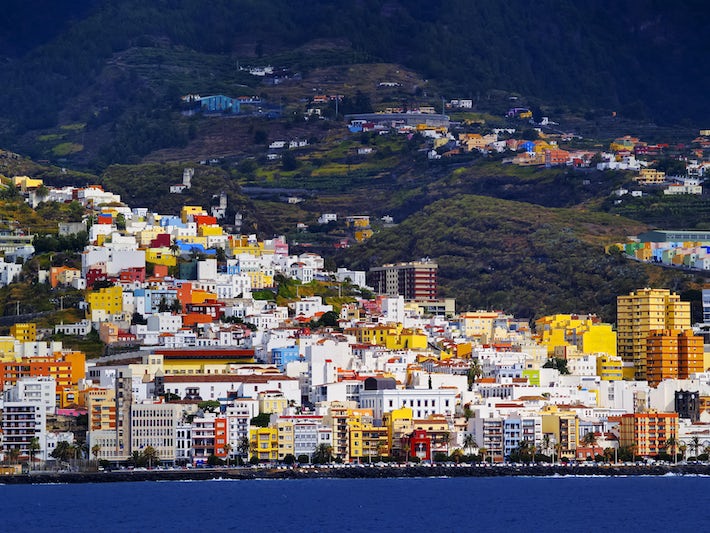 Find Things to Do in La Palma on Viator

Popular Things to Do in La Palma

Food and Drink in La Palma

If you prefer a lazy lunch as a break from your exploring, you'll find good restaurants near the waterfront on Avenida Maritima and Alvarez de Abreu. Fresh sardines, shellfish and fried goats' cheese are typical. The latter is usually served with a mojo sauce, which may be green or orange depending on ingredients (red or green pepper, oil, vinegar, thyme and coriander). Wherever you eat -- and whatever diet you're on -- order pudding, as La Palma residents are rightly proud of their desserts. Bienmesabe (a kind of almondy eggy custard) is particularly good.

O'Daly Street: Stroll along pretty, cobbled O'Daly Street (Calle O'Daly) -- a magnet for tourists -- with tempting antique and craft shops and easy access to the main sights. Named after an Irish merchant, O'Daly runs parallel to Avenida Maritima, Santa Cruz's waterfront promenade. This is also where to find the tourist information center. (Calle O'Daly 22; 922 41 21 06; open 9 a.m. to 7.30 p.m. Monday to Friday, 9 a.m. to 3 p.m. Saturday and 9 a.m. to 2 p.m. Sunday)

The Promenade: Walk back to your ship along the promenade, which -- like O'Daly Street -- is lined with 18th-century mansions notable for their elaborate wrought-iron balconies, massive doors and fine courtyards. Another incentive is that waterfront concerts are sometimes held there, so you could enjoy music while you walk.

Plaza de Espana: This palm tree-filled, bougainvillea-draped courtyard just off O'Daly Street is home to an artisans' market selling high-quality lacework, embroidery and leatherwork. These can be quite expensive, but the craftsmanship is exquisite.

Plaza de Espana: It's a must for lovers of fine architecture, as the area holds the Italian Renaissance-style Ayuntamiento (Santa Cruz's 16th-century town hall) and the Convento de San Francisco (on Calle Real).

Santa Maria: Check out the striking timber replica of Christopher Columbus' famous ship, the Santa Maria, which is known to residents as the Barco de la Virgen. The replica is particularly worth seeing during one of Santa Cruz's many fiestas when it is dressed in flowers. Walk right along the promenade, past the Castillo, then head left up Pedro J. de las Casas; turn right at the top.

Visit Fuencaliente: Is a day at the beach too tame? Take a walk on the wild side of a volcano from Fuencaliente, a municipality about 20 miles (an hour's taxi ride; 32 euros one way) from Santa Cruz. This is, as you might say, the gateway to volcano land -- thrill seekers can view the still-active Volcan de Teneguia or walk to the calmer (we hope) Volcan de San Antonio.

Las Nieves: Closer to Santa Cruz (about a 20 euro cab ride away) is the lovely hill village of Las Nieves, famed for its fragrant citrus groves and 14th-century terracotta statue of Our Lady of the Snows, La Palma's patron saint.