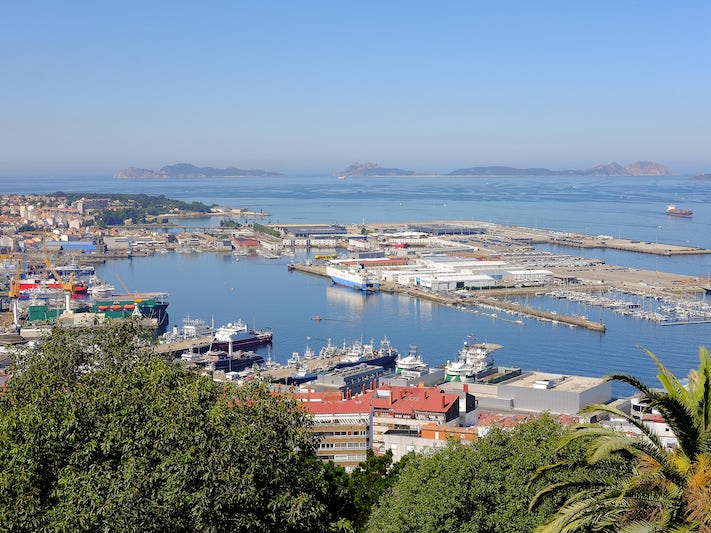 Find Things to Do in Vigo on Viator

Popular Things to Do in Vigo

Food and Drink in Vigo

Love seafood? You'll be spoiled for choice in Vigo; the Galicians like their food plucked straight from the ocean and serve it up in style. Most Vigoan restaurants are open from noon until 3 p.m., and the best way to choose is simply to stroll about and follow your nose.

If you're not that keen on fish, it's no problem; whistle up some crusty bread and a plate of jamon iberico (Iberian ham), a delicacy made from free-range Iberian pigs. Or try caldo gallego -- a rich Galician broth made with pork, beans, potatoes and cabbage.

And if you want something really hearty, follow in the footsteps of the pilgrims and order Tarta de Santiago (St. James' cake), a rich, almondy tart dusted with sugar. Most Spanish restaurants are open for lunch from 12:30 p.m. to 2 p.m. and then reopen from 6 p.m. to midnight for dinner.

Close to the Port: You'll find restaurants dishing up exquisite oysters all along Calle de Pescaderia -- look just behind the open air stalls where oyster sellers lay out their wares on granite slabs. Even if you're planning to have lunch on your ship, try a plate of freshly harvested oysters with crusty local bread as a starter -- they're Vigo's speciality and really too good to miss.

Plaza de Compostela: This place is another good hunting ground for the hungry, as it is home to many fine restaurants and food bars. Options include Meson Compostela, which is open from breakfast time and has outside tables on the square. Specialities include fish stew, and if that's not to your taste, there is a good selection of cheeses and hams. (+34 986 432 896)

In Old Town: Try Picadillo, which offers a set lunch menu including coffee and pudding. (10 Calle Fermin Penzol in Old Town, near the Garcia Barbon Theatre; open 12:30 p.m. to 2 p.m. Monday through Friday)

For a Splurge: To celebrate a special occasion or just because you love great food try Maruja Limon, Vigo's one Michelin-starred restaurant. This offers a seven-course tasting menu and three-course menu degustacion corto. Prepare to be impressed with offbeat offerings like marinated scallop with cucumber and soybean, and green apple ice cream served with mandarin, pineapple and celery. (Edificio Siete Torres at 103 Avenida de Galicia; +34 986 473 406)

Pick up a bottle or two of Ribeiro, a delicious local wine made from grapes grown in the valleys between the Mino, Arnoia, Avia and Barbantino Rivers (hence its name, which means riverbank). Galicians usually serve this crisp, fruity wine very chilled in porcelain cups, and it goes well with seafood.

Vigo has more than 40 beaches, most of them to the west of the city (though Punta, a man-made beach to the east near Teis, is an exception).

Samil Beach (about seven kilometers and a 12-minute cab ride from the port) is one of the most popular because it stretches for nearly a mile, has Blue Flag status (given by the Foundation for Environmental Education to beaches that meet criteria for high water quality and safety) overlooks the Cies Islands nature reserve.

Samil Beach is also a thriving little resort in its own right, with swimming pools and basketball, tennis and paddle courts. It even has an interesting interactive museum called Verbum (Latin for word). The facility is devoted to language, symbols and communication and has four floors, each dedicated to a different theme: languages, sciences, literature and technology. (Closed Mondays)

There are also good beaches on the Cies Islands, and Vigo has two other Blue Flag beaches -- O Vao, a wide and long beach with nice facilities and a bridge to the small island of Toralla, and Canida Beach. Some beaches are clothing-optional.

You'll find ancient and beautiful churches in Vigo's Old Town. These include Santa Maria de Castrelos, which dates from the 13th century, and the 16th century La Colegiata de la Santa Maria la Mayor -- famed for its lovely Renaissance facade -- which is sometimes used as a venue for daytime concerts.

Stroll along Calle de la Pescaderia, site of Mercado de Berbes, the city's main fish market, which is famous throughout Europe. There, you'll find iced slabs of granite laden with freshly caught turbot, monkfish, spider crabs, octopus and other goodies from the sea. And though the smell is heady, it's actually the aroma of ocean rather than fish -- so you know the goods are super fresh. The fishmongers are mainly female, because the men are out fishing.

If art is more your thing, stop into the Museo de Arte Contemporaneo de Vigo, which is housed in a former courthouse (complete with gaol) within walking distance of the port. It features multimedia work by Spain's hottest artistic talents. The museum also has a decent cafe and is fun if you're traveling with youngsters. (Principe 54; +34 986 113 900; open 8 a.m. to 8 p.m. Tuesday to Saturday, closed Mondays)

Explore the delightful medieval fishing village of Bayona La Real. News of Columbus' discovery of the New World was first heard there in 1493, and the quaint town is also famous for its 12th century church and 16th century castle (now a state-run hotel, known as a Parador). It has a lovely Old Quarter with some good tapas bars and is 12 miles from Vigo.