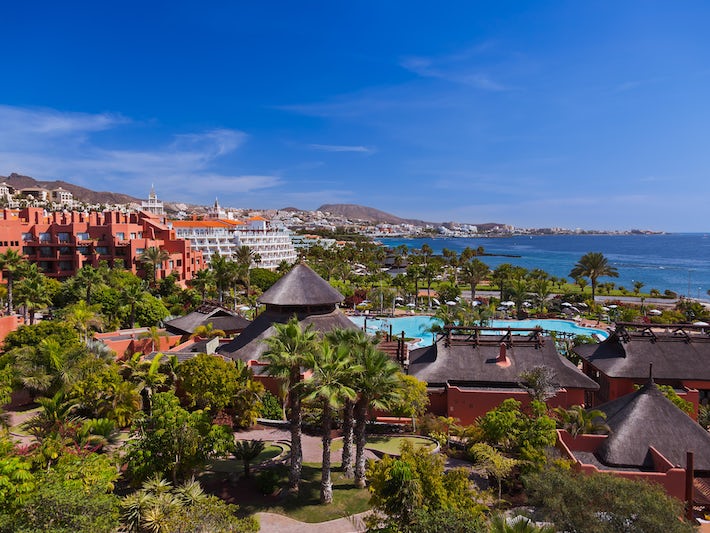 Find Things to Do in Tenerife on Viator

Popular Things to Do in Tenerife

Food and Drink in Tenerife

Both downtown Santa Cruz and its seafront are well endowed with restaurants, tapas bars and a fast food outlet, which are generally open all afternoon from noon. If you want to try local dishes -- like Ranch Canaria (meat and vegetable soup), Cazuela Canaria (fish stew) or papas arrugadas (small potatoes cooked in their jackets with a hot Mojo dipping sauce) -- look out for the word "tipico" on the restaurant sign, as this indicates that it serves typical local cuisine.

Upscale Option: On my trip, Captain Keith Dowds, master of P&O Cruises' Arcadia, returned from some shore leave full of praise for the carpaccio of foie gras dished up at La Aceituna restaurant at 6 Emilio Calzadilla Street. Lunch hours are from noon until 4 p.m.

Plaza de Espana. farther along the waterfront and at the heart of the city, is a good place to start exploring Santa Cruz's Old Quarter and key attractions, including the Museum of Nature and Mankind (on Calle Fuente Morales), the TEA, Tenerife Espacio de las Artes (Tenerife Arts Space) on Avenida de San Sebastian, a museum where exhibitions, photography and works of art are displayed; and the 16th-century Iglesia de Nuestra Senora de la Concepcion (the city's oldest church built in 1500) -- are within walking distance.

Auditorio de Tenerife Adan Martin on Avenida de la Constitucion. This Opera House was built in 2003 and designed by the world-famous architect, Santiago Calatrava. The shining sculpture, just by the sea, features a colossal overhanging wing and is entirely covered in trencasis, a mosaic of tiny ceramic fragments. Festivals, concerts and shows can be enjoyed at the Opera House all year round -- and it's particularly special when lit up in the evening.

The Palmetum, palm tree park and botanical garden on the sea front, boasts the biggest collection of palm trees in Europe with over 3,600 trees and 1,600 different species. Unbelievably this lush oasis was built on a former rubbish dump.

The Museo Militar de Almeyda lies opposite the Plaza de Espana. This military museum contains the canon, which shot off Admiral Lord Nelson's arm when his fleet attacked the city in 1793 (and no jokes about his intentions being armless, please).

La Rambla, a tree-lined avenue, features an outdoor exhibition of sculptures with works by Miro and Henry Moore.

San Cristobal de la Laguna, Tenerife's original capital and a UNESCO World Heritage Site, lies only five miles (about a 45 minutes away by tram) from Santa and is the loveliest town on the island. Here, you'll find Tenerife's oldest cathedral and university within easy walking distance of each other. By day, La Laguna is a shopper's paradise with a limitless number of small but exclusive shops. At night, it is pure fun with a wide range of bars and nightclubs. And in the surrounding area are traditional Canarian restaurants, Anaga rain forest, sleepy coastal villages and quiet beaches.

Orotava Valley, to the south of Santa Cruz, is an ideal spot for lovers of plants and nature. A drive along the valley's mountain road reveals spectacular scenery, while the town of La Orotava itself is well worth visiting for its classic Spanish colonial architecture and fine gardens. The valley also contains magnificent Botanical Gardens, which date from 1788.

Loro Parque is equally spectacular. It's a 13-hectare wildlife themed park in the foothills of El Teide, which contains one of the world's largest collections of parrots. It also has aquaria, dolphin pools, sea lions, an underwater tunnel, a bat cave, a Gambian market and a Thai village. Entrance costs around 20 euros but you can get a free train ride there from the Avenida de Venezuela (to the east of Plaza del Charco) in Santa Cruz; yellow tourist trains run every 20 minutes.

Real Club de Golf -- which lies near Tenerife's Los Rodeos Airport, about nine miles from Santa Cruz -- is where golfers can get a round in. Kit can be hired on site, but be warned that the club is open to non-members on weekday mornings only. If you have time, head further north to Golf La Rosaleda or Buenavista Golf or go south to Golf del Sur, Amarilla Golf, Golf Los Palos, Golf Las Americas or Abama Golf.