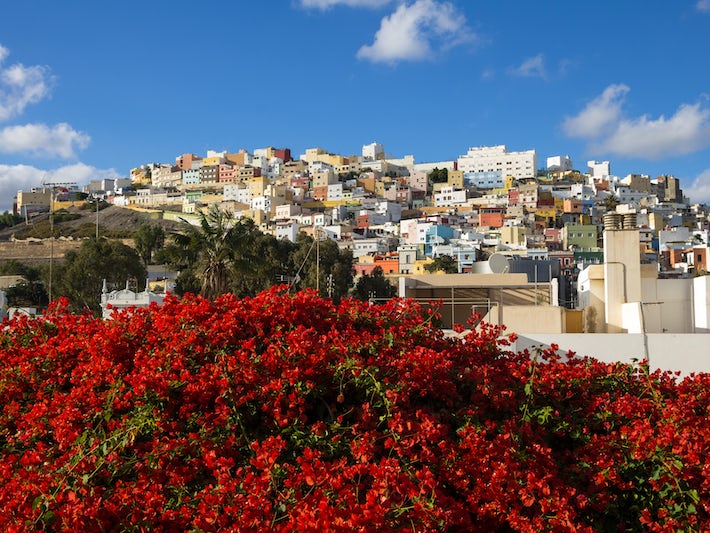 Find Things to Do in Las Palmas (Gran Canaria) on Viator

Popular Things to Do in Las Palmas (Gran Canaria)

Closest to the Port: If you're feeling lazy, the Playa de las Canteras offers sun, sea, sand and waterfront cafes within pleasant strolling distance of the port. It's very popular with the locals, so it's a good place to see Canarians and their adorable children at play. Go to Playa del Ingles if you plan to pass this way just once, as it's a lively and classic Canarian "experience."

Plaza de Santa Ana: The city's main square, is dominated by Las Palmas' 15th-century cathedral of the same name. The twin-towered cathedral was the first church in the Canary Islands. The Gothic-style building features an elaborate high baroque central altar and a display of church ornaments originally from St Paul's Cathedral in London.

Casa de Colon: Also worth visiting -- and just off the cathedral square -- is the 15th-century Spanish mansion where Columbus is believed to have stayed in 1492. Having spent many years as the official residence of Gran Canaria's Spanish governors, it is now a museum containing displays of maps and artifacts related to Columbus' voyages. (Calle de Colon 1; 928 31 23 73; open 10 a.m. to 6 p.m. Monday to Saturday and 10 a.m. to 3 p.m. Sunday)

Parque Doramas: Stroll the lovely Ciudad Jardin (Garden City) region of Las Palmas (just off to the right -- up Paseo Rafael Ramirez -- as you walk along the Avenida Maritima del Norte toward town). You'll see traditional Canarian flora, including dragon trees, and the park also contains the Pueblo Canario, a traditional Canarian village established in 1939.

Playa del Ingles: Gran Canaria's largest international resort area, Playa del Ingles is an hour's bus or taxi ride from the port. A return taxi ride for up to four passengers would cost around 100 euros. It is crammed with high-rise hotels, bars, clubs and restaurants, but the main attraction is that it is a gateway to the wonderful "Lawrence of Arabia"-style rolling sand dunes at Maspalomas Beach, a nature reserve.

Elder Museum of Science and Technology (Museo Elder de la Ciencia via Tecnologia): This museum is crammed with elaborate Heath Robinson-style contraptions, and there is a fun interactive area for kids. To get there from the port, walk straight through El Muelle, and you'll find the large white and turquoise building opposite the exit. (Parque Santa Catalina; 828 01 18 28; open 10 a.m. to 8 p.m. Tuesday to Sunday; 5 euros adults, 3.5 euros children, free for younger than 6; fee includes use of Internet cafe)

Teror: This country town, located 22 kilometers southwest of Las Palmas, is famous for the intricately carved wooden balconies of its houses, and the countryside you'll travel through to get there is simply lovely. Don't miss a visit to the 16th-century Basilica of Our Lady of the Pine, which is dedicated to a sacred effigy of a virgin said to have appeared miraculously in a pine tree. The church is closed on Monday mornings.