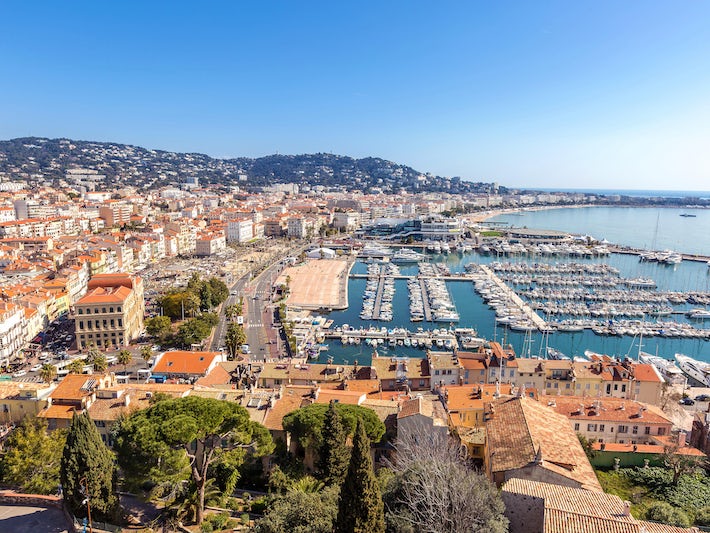 Find Things to Do in Cannes on Viator

Popular Things to Do in Cannes

Food and Drink in Cannes

It's hard to go wrong in Cannes when your stomach starts to growl. Local specialties include bouillabaisse, a fish soup; tapenade; aioli, a mayonnaise made from garlic, egg yolk and olive oil; salade Nicoise; and socca, a chickpea flatbread. The French lunch is often a three-course affair. Be mindful that the meal is typically served from roughly noon to 2 p.m.

Auberge Provencale is the oldest restaurant in Cannes, and it's a favorite of media and film people. It's easy to understand why. Auberge Provencale has been known since 1860 for its rustic and traditional French food, and specialties include bouillabaisse for two, slowly cooked duck with a creamy tapenade, and a beef filet with mashed potato truffle and bearnaise sauce. You can order by the entree or select the three-course fixed-price menu. From its timbered ceiling to its stylish paintings, the restaurant exudes charm. One thing is for sure: You won't go away hungry. Prices range from moderate to expensive. (10 rue Saint Antoine in Old Town; open daily, noon to 2:30 p.m.)

Another locals favorite, Aux Bon Enfants, is an old-style cantina near the Forville market that serves traditional favorites like chargrilled veal kidney, grilled swordfish, calf's head and cod with Nicoise sauce in traditional crockery. Wine is served in pitchers. The third-generation eatery offers festive indoor seating, and in summer, its outdoor terrace opens up on the popular rue Meynadier. Prices are inexpensive. Cash only. (80 rue Meynadier; open for lunch from noon to 2 p.m.)

For star gazing, the lobby bar at the Intercontinental Carlton is a good perch. Much of the Grace Kelly classic "To Catch a Thief" was shot at the Belle Epoque hotel, which celebrated its 100th anniversary in 2013. The handsome lobby has nice views of the sea as well as the occasional star. Tea time features tea or hot chocolate and assorted pastries. There is also a robust all-day menu that includes salads, sandwiches and specialties such as duck foie gras and the day's "fresh catch." (58 La Croisette; lobby open from noon to 2 a.m., tea time from 3 p.m. to 6 p.m. daily)

The elegant Boulevard de la Croisette pumps with enthusiasm. If Cannes has a stage, this is it: a two-mile strip with grand hotels like the Majestic, the Carlton and the Martinez. During the film festival, when the jet set descends, the royal suite in the Majestic goes for 40,000 euros a night. Sublime, sandy beaches are attached to the hotels, but you must pay admission. Prices are listed at access points on the promenade. A small slice of public beach is located behind the Palais des Festivals. All manner of luxury brands call La Croisette home -- Cartier, Fendi, Escada, Jean Paul Gaultier, Ferragamo, Dolce & Gabbana, and Vuitton, among others. If you see a "Cannes Prestige" sign in the window, it signifies the promise of over-the-top service and at least one English-speaking sales associate.

Just walk uphill, and you'll reach Le Suquet, the town's historic center. The maze of about 10 narrow streets and alleyways, most of them pedestrian-only, overlooks the west end of the old port. Follow rue Saint-Antoine uphill for the best views in town. Among the sights: St. Anne's chapel, dating to the 12th century; Notre-Dame d'Esperance, a gothic church built in the 17th century; and the Castre Museum. The museum, closed Mondays, is housed in the remains of a medieval castle and features Oriental art and antiquities as well as a collection of 19th-century paintings of Cannes and the French Riviera. At the foot of Le Suquet, the famous Forville market offers a gourmet pilgrimage through the flavors of southern France. The covered market, built in 1870, is open from 7 a.m. to 1 p.m. every day except Monday when it converts to an antiques market.

Cannes evolved into an internationally known resort and film capital in large measure because of Lord Henry Peter Brougham, a Grand Chancellor of England who became smitten with the tiny Riviera outpost in 1834. Brougham became a poster boy for his adopted home, leading its development and talking it up among the English aristocracy. No visit to Cannes would be complete without a look at the statue of Brougham in the Allees de la Liberte square, which is also home to a flower market, and nearby, a flea market selling everything from sterling silver and antique linens to inexpensive jewelry and movie posters.

Cannes is also a shopper's paradise. La Croisette and rue d'Antibes are where you will find the luxury boutiques and art galleries. The six-block-long rue Meynadier, which runs parallel to the port just a few streets uphill, is a colorful pedestrian-only zone with shops selling hats, clothing, wine and cheese, roasted chicken and local products like handcrafted shoes and the ubiquitous lavender sachets. Most stores accept major credit cards. (General opening hours are Monday to Saturday from 9 a.m. to noon and 2 p.m. to 7 p.m.)

Outside Palais des Festivals is Allee des Stars, Cannes' version of Hollywood's Walk of Fame. No surprise that Cannes' "sister city" is Beverly Hills. There are handprints from more than 200 celebrities who have attended the film festival, including Laura Dern, Ben Gazzara, Sharon Stone and Timothy Dalton. Locals refer to the festival hall as "the bunker" and no wonder: It's an unattractive slab of concrete that failed to get prettier when a new wing was added in 2012. To engage in some boat lust, check out the mega-yachts docked next to the complex, which includes a casino, broadcasting studios, a theater and 2,300-seat auditorium.

The Lerins Islands, just off the Cannes coast, offer a great getaway -- and an opportunity to experience something wildly different than its glitzy neighbor. It is said that the forest of green oaks and eucalyptus on the two islands, Sainte-Marguerite and Saint-Honorat, are among the oldest in Europe. Marguerite, two miles long, is the larger of the islands and is best known as the prison of the Man in the Iron Mask. There is a nature trail, a fortress, a prison and a marine museum, which opens daily at 10:30 a.m. Honorat has been the site of a monastery since the 5th century, and the monks there welcome visitors. A shop at the monastery sells wine, honey and a liqueur called Lerina -- all produced in-house. Water taxis depart for the islands from the tender dock multiple times a day year-round.

From Cannes, you can rent a car and sample nearby coastal towns like Antibes and Cap d'Antibes, as well as inland villages like Grasse and Saint Paul de Vence, in a day's time because everything is within an hour's drive. Closest to Cannes, roughly five miles away, is Antibes, known for its renovated Picasso Museum. (Place Mariejol; +33 (0)4 92 90 54 28; open Tuesday to Sunday from 10 a.m., but hours may vary.) Cap d'Antibes, adjacent to Antibes, is a lush peninsula with luxury mansions, sparkling hotels and botanical gardens. Grasse, less than 15 miles from Cannes is famous for its leather goods and perfume industry. France's three largest, oldest and most prominent perfumeries still produce their fragrances there. The factories are open to visitors. Lastly, Saint Paul de Vence is a small, tucked-away 16th-century village that has long been a refuge for artists, art collectors and art lovers.