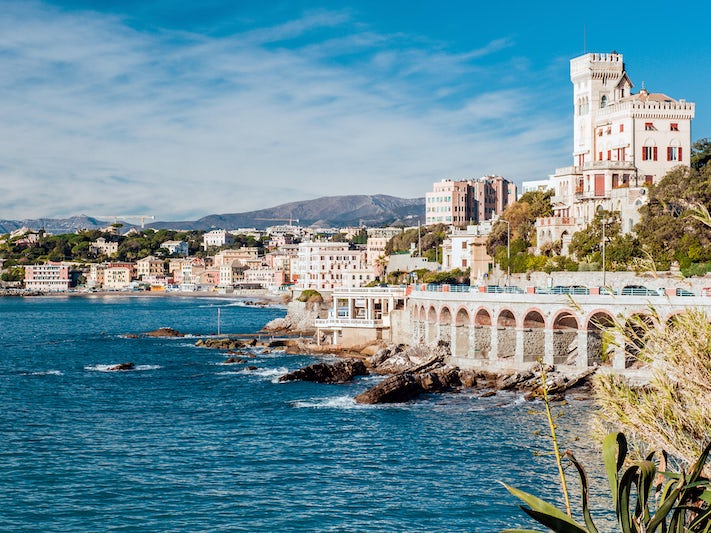 Find Things to Do in Genoa on Viator

Popular Things to Do in Genoa

Food and Drink in Genoa

The town's historic center is dotted with tiny pizza places and restaurants. One that consistently gets good reviews is Trattoria Al Rustichella, a quaint spot with huge curb appeal. Located at 59 Via San Vincenzo, it's open noon to 2:30 p.m. and reopens at 7:30 p.m. It's closed Fridays.

Our meal at Zeffirino, 20 Via XX Settembre -- Genoa's most famous restaurant -- was a highlight of our visit. The historic, family-operated eatery (which also has an outpost in Las Vegas at the Venetian and, for a time, operated an alternative restaurant on Costa Atlantica) revolutionized the use of basil. Its most famous dish -- ravioli with a pesto sauce -- is like summer on a plate. The restaurant specializes in Ligurian-influenced dishes, including seafood and pasta; what you'll remember, however, is Zefferino's intimate ambience and warm hospitality. While you sip on the complimentary, meal-ending grappa, ask to see chef scrapbooks of meals with the Pope. It's open noon to midnight, except Wednesdays.

The Old Port is as much a tourist destination as a place that locals like to call "the market square on the Mediterranean." It's where residents come to jog, walk their dogs and listen to music. The highlight is the stylish Acquario Di Genova, opened in 1993 with 10,000 specimens belonging to 800 animal species and 200 vegetal species. With 71 exhibition tanks and a focus on conservation and sensible management of aquatic environments, it's a standout. Since 1998, the experience has been made even richer by the arrival of the Great Blue Ship, a sailing vessel that houses exhibition space, along with reconstructed Mediterranean and tropical environments. Labels are in English and Italian. March through October, the aquarium is open 9 a.m. until 7:30 p.m., Monday through Thursday; 9 a.m. to 10 p.m. on Fridays; and 9 a.m. until 8:30 p.m. on weekends. November through February, it's open weekdays, 9:30 a.m. to 7:30 p.m., and weekends, 9:30 a.m. to 8:30 p.m. Prices: 14 euros, adults; 12 euros, seniors 65 and older; 8.5 euros, children 4 to 12; free, children 3 years and younger.

The Bigo, whose shape recalls the cranes of old cargo ships, is a rotating lift that sends passengers skyward, past the rooftops, for a panoramic view of the city. Located at the Old Port, it offers a unique peek at the Cathedral of San Lorenzo, the port complex and hills, once ensconced with 16 forts to defend the city. Price: three euros, adults; two euros, kids 12 and younger.

Other "don't miss" attractions include an ice rink (in winter), games arcades and an outdoor theater, which, during warmer weather months, hosts theatrical performances. Galata Museo del Mare is the Mediterranean's largest sea and navigation museum.

Just one block above the port, the Cathedral of San Lorenzo, with its medieval, Ligurian, black-and-white, marble facade, is the centerpiece of a thriving neighborhood of shops, restaurants and apartments. The church was reconstructed in Romanesque style in the 12th century. Since the Crusades, the church has protected the ashes of St. John the Baptist, Genoa's patron saint. Two blocks from here is Piazza de Ferrari, the commercial heart of Genoa. Notable occupants of the piazza are the opera house and the Palace of the Doges, which dates back to the 13th century. The shopping avenue, Via XX Settembre, spins off from the piazza, as well. The avenue just hums with activity. For a nice stroll, follow it east -- past the town's impressive medieval gates -- about 10 blocks to Vittoria Park.

Via Garibaldi and Via Balbi -- streets, known as the Strade Nuove -- are home to elegant art museums, housed in palaces and mansions.

If you're in town for a few days, take a day trip to Portofino, a charming and cosmopolitan village by the sea.