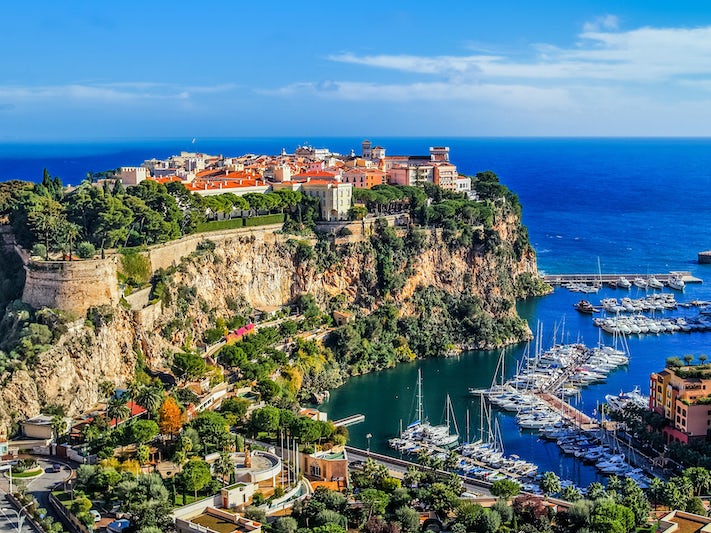 Find Things to Do in Monaco (Monte Carlo) on Viator

Popular Things to Do in Monaco (Monte Carlo)

You could find a budget restaurant in Monaco. But why? This is one of those places meant for a splurge, whether you choose the world-famous Cafe de Paris or one of the other see-and-be-seen spots in Monte Carlo. If you're on the go, you can find -- in the center of Monte Carlo and in the Old City -- vendors selling socca, which is made from chickpea flour and resembles a pancake, or bakeries selling another Monegasque specialty, fougasse, a sweet pastry with almonds and anise seed. Most of the restaurants are open for lunch from noon to 2:30 p.m.; brasseries and cafes are open from about 11 a.m. until late.

Quai des Artistes: This brasserie is one of the closest dining spots to the cruise ship dock, along the quay to the yacht harbor. It isn't as expensive as some (you can get "moules marinieres" -- mussels in wine -- for about 12 euros) but it isn't cheap, either. Its draw is that it's close to the ship, offers plenty of outdoor seating and overlooks the yachts in the harbor. (4 Quai Antoine 1er; +377-97-97-97-77)

Zebra Square: Just a few minutes south of the casinos and the center of Monte Carlo, this restaurant offers sweeping views from its dining terrace. It's a trendy bar and features elegant inside seating. Don't be surprised if you see literary and artsy notables sitting beside you and enjoying the view. It's open for lunch, tea time and supper. (10 Avenue Princesse Grace; +377-99-99-25-50)

Cafe de Paris: Undoubtedly a tourist trap, Cafe de Paris is a scene regardless. You can pop in for a beer or a cafe creme, or you can enjoy a full-blown lunch indoors or out (advance reservations highly recommended). Although a bowl of ice cream will set you back about 12 euros, it's worth paying for one of the best people-watching spots in town. The historic building incorporates the best of the old Belle Epoque style of Paris -- and also the kind of haughty, condescending service staff you've feared you'll find in France! (At the Monte Carlo Casino; +377-92-16-20-00)

Stars 'N' Bars: Tired of that rich cruise ship cuisine? Longing for a taste of home? This Tex-Mex eatery doesn't just cater to the Yankee crowd; Monegasques, Italians and visitors from other countries love it, too, especially the line dancing and country boot-stomping music. The venue offers a playroom for kids and Monaco's main cybercafe. It's located next door to the Quai des Artistes, so you can have your chili cheeseburger and go next door for an apres-midi aperitif. (6 Quai Antoine 1er; +377 97-97-95-95)

Les Grands Appartements du Palais: Visitors can go through the home of Prince Albert and check out the throne and artifacts of the principality's history. Stunning artwork by Breughel and other Old Masters hangs in these rooms, as does the state portrait of Princess Grace. If you get there in time for the changing of the guard (releve de la garde), you can enjoy the pomp and circumstance of this unique little "country." (The ceremony starts at 11:55 a.m. and takes about 10 minutes.) After the tour of the Appartements, you can visit the Musee du Palais du Prince, with more historical artifacts, mementos and documents from the era of Napoleon Bonaparte. (Place du Palais; tours March 29 to Oct. 31 daily 10 a.m. to 6 p.m.; museum open June to September 9:30 a.m. to 6:30 p.m., October to May 10 a.m. to 5 p.m.)

Musee de l'Oceanographie: This is basically the state aquarium with a historic maritime museum thrown in for good measure. But don't mistake "basically" for "basic," as it's anything but. This is one of the most important aquariums in Europe, with 4,000 species of fish and 200 types of invertebrates. The building, dedicated in 1910, sits below the palace; the aquarium butts into the sea and features more than 90 tanks. The highlight is the Shark Lagoon, where visitors can get a close-up view of sharks, moray eels, turtles and other marine creatures from four different angles. (Avenue Saint-Martin; open daily 10 a.m. to 6 p.m. in winter, with hours extended to 8:30 p.m. in summer)

Monaco Cathedral: Located in the old city, this is where Prince Rainer and Grace Kelly married and also where they are buried (as well as the princes of Monaco and members of the House of Grimaldi). The cathedral was built in 1875 with white sandstone brought down from the village of La Turbie. If you are visiting on a Sunday between September and June, the Children's Choir of Monaco and principals from the Cathedral Choir School sing mass at 10 a.m. (4 rue Colonel Bellando de Castro; open 8:30 a.m. to 7 p.m.)

Grand Casino: You can see the elegant building with two spired towers, which was built in 1878 by Charles Garnier (the architect of Paris' famed Opera House), from your ship. Oddly enough to most North Americans, it houses not only the gaming rooms but the Monaco Opera and Ballet as well. There is a dress code: jacket and tie required of men, resort chic for women. Don't even think of trying to get in with sneakers. (At least a tux is no longer required for entrance!) You must be at least 18 years old to enter, and your passport is required. Monagasques are not allowed to gamble in their casinos, so a passport check is requisite. Aside from that, anyone can play in the casino, but don't expect to see any high rollers; the real big spenders are hidden away in private gaming rooms. (Place du Casino; open daily from noon, slots open at 2 p.m.)

Hotel de Paris and Hermitage Hotel Lobbies: Hey, it doesn't cost a thing just to look. Hotel de Paris is a Beaux Arts gem, built in 1863. The portico is reminiscent of an elegant Parisian palace of the same era. The Hermitage, which stretches over several buildings, up and down hills, recently renovated its Beaumarchais Lobby that was originally built in 1900. Lovers of historic buildings and period architecture will really enjoy looking at these elegant respites for the rich and famous (or just the rich without the fame).

Les Thermes Marins de Monte Carlo: This is a fancy name for the four-story spa built below the Hermitage Hotel along the seawall. Here, you can enjoy a spa day and feel like Cote d'Azur royalty. A pass to the thermal suite is pricey, but massages and treatments, while a bit more than the typical Steiner-run onboard spa, are not outrageous. There are also pampering treats and massages for men. (2 Avenue de Monte-Carlo; +377-98-06-69-00)

Condamine Market and Rue Princess Caroline. This area has always been the trading place in Monaco. The thriving market, which dates to 1880, features fruit, vegetables, fish, flowers, kitchenwares, coffees, wines ... everything you'd expect in a city marketplace in Europe. Beside the market is Rue Princess Caroline, a pedestrian mall lined with shops and park benches. (Place d'Armes; market open daily 6 a.m. to 2 p.m.)

The Azur Express Tourist Train costs seven euros to board (four euros for children), and the full narrated loop takes only 30 minutes. But this little open-air trolley is the best deal in the entire principality. You get a full tour through the old town and Monte Carlo; it sure saves those leg muscles. (Avenue Saint-Martin at Oceanographic Museum; +377-92-05-64-38; daily from 10 a.m. to 5 p.m. March to October and 10.30 a.m. to 5 p.m. November to February)