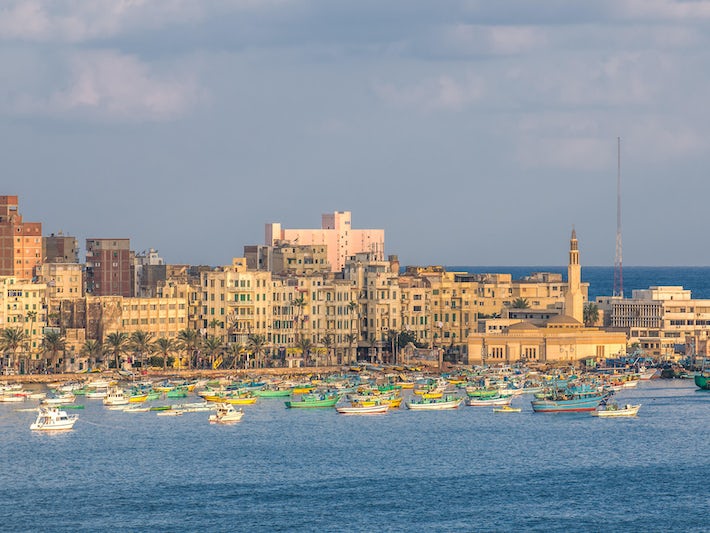 Find Things to Do in Alexandria on Viator

Popular Things to Do in Alexandria

Food and Drink in Alexandria

Look no farther than the Fish Market, a lovely restaurant on Corniche with sweeping views of Eastern Harbour. Select your own seafood -- red snapper, gray mullet, threadfin fish, silver bream, lobster, sole, shrimp or clams -- and the chef will grill, fry or steam it for you. Prices noted are per kilogram. Lunch is served with an array of exceptional salads and appetizers, including hummus with tahina, baba ganoush, tahina with green peppers and spices, a green salad and potato salad. To complete the package, a fantastic traditional bread, made of plain and wholemeal flour, is baked in a kiln right on the restaurant floor. Another plus: Unlike most restaurants, this one serves wine. Fish Market is considered one of Alexandria's most upscale eateries, yet lunch for two with a half-bottle of an Egyptian Pinot Blanc can cost as little as $15. That tells you something about the local economy. Open noon to 2 a.m.

Corniche, 12-plus miles long, is the lively seafront boulevard that serves as Alexandria's social touchstone. On one side are public beaches, a fleet of yellow, blue and green fishing boats and a stone citadel called Qaitbay Fort that dates back to 1480 A.D. One of Alexandria's visual signatures, the fort is built on the remains of the legendary Pharos lighthouse. Most days, a legion of surf casters (fishermen) hits the rocks outside the citadel, drawing the undivided attention of feral cats and tourists alike.

Mid- and high-rise buildings, ranging from shabby to chic, dominate the other side of the boulevard. Here, you'll find restaurants, coffee houses, hotels and a few reminders of home: Domino's Pizza, Starbucks and Chili's. The Cecil Hotel, now a Sofitel, is on Corniche. Built in 1930, guests included Winston Churchill, Somerset Maugham and Noel Coward.

A more recent arrival to the looping waterfront boulevard is the fabulous Bibliotheca Alexandrina. Opened in 2002, the beautifully styled library -- with space for eight million books -- was inspired by a library built here in 3rd century B.C. In its day, it was considered the greatest library of all time, a magnet for the world's intelligentsia. The new library, designed as a sun rising out of the Mediterranean, is believed to have been built on the site of its ancient predecessor. Editor's tip: Ask your taxi driver to take you to the Fish Market, a popular restaurant on Corniche that puts you within walking distance of all of these highlights.

The Alexandria National Museum, which is on the newer side, is an Italianate villa that housed the U.S. embassy for years and chronicles the city's history from ancient to modern times. Three floors of original artifacts bring alive such marquee names as Nefertiti, King Tut and Alexander the Great. One room is devoted to the mummification process. Labels throughout are in English and Arabic. The museum, 110 Tariq al-Horreyya, is open daily, 9 a.m. - 4 p.m. Prices: 30 pounds for adults and 15 pounds for kids six to 15. Children under six admitted free.

Take a horse and carriage ride. Drivers are positioned in all the obvious places, including just outside the port. Touristy, yes, but it's a nice way to experience the crowds along with the riot of sensory stimulation that is Alexandria's essence. Editor's tip: Negotiate the fee first, but don't be surprised if it changes by the end of the ride.

Check out one of the Egyptian coffee houses. They are known more for mint tea than coffee, but the star attraction is the ubiquitous sheesha, a water pipe that's brought to the table along with a mix of tobacco and molasses. Most people order their tobacco soaked in apple juice, which creates the sweet aroma that rounds out the experience.

Take the trip to Cairo (best done via private tour operators or your ship's shore excursion office), and visit the archaeological site in Giza for an external view of the magnificent pyramids; you will also see the Valley Temple and the Sphinx.